Philadelphia's tax collections from its controversial tax on sweetened beverages are continuing to fall far short of the levels that the city's politicians have projected.

The latest evidence that situation is continuing comes from the city's preliminary data for both July and August 2017. Worse, for the city's soda tax-loving politicians, that preliminary data suggests that the gap between the desired level of revenue that they have been counting upon to fund new spending programs and the amount of revenue that the city is actually collecting from its tax on both regular and diet soft drinks has opened wider during the hottest months of summer when the sales of soft drinks typically are either at or near their highest point for the year. 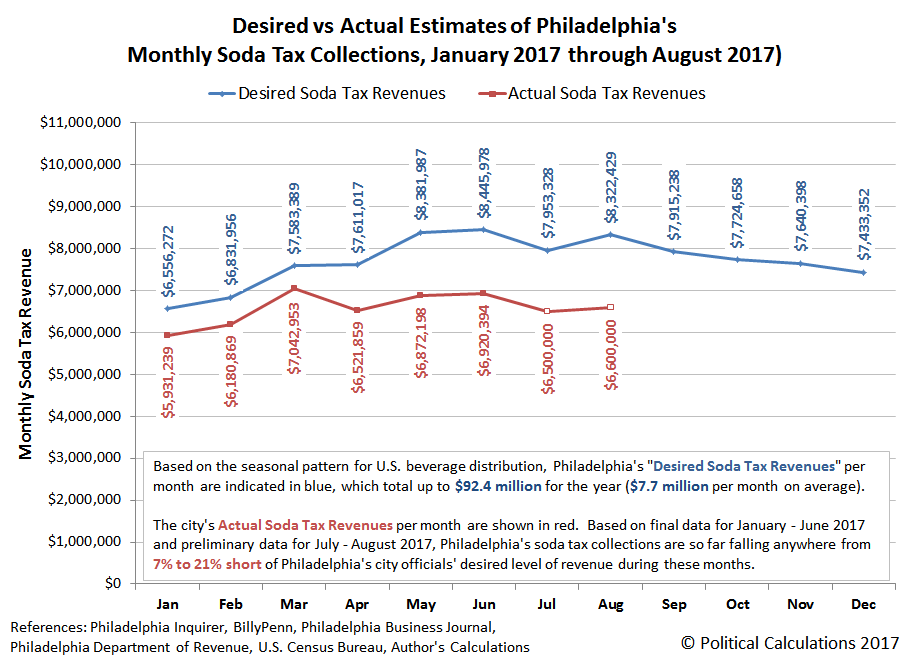 The chart above indicates the amount of the Philadelphia Beverage Tax that was assessed in the indicated month, which is collected in the following month (for instance, taxes assessed in January are collected in February, and so on). Since the city government's fiscal year began on 1 July 2017, there are now three months of data to measure how its soda tax collections are faring, which are shown for the months of June through August 2017.

If Philadelphia's soda tax was collecting as much revenue as Philadelphia's mayor and city council desired, the city would have collected approximately $24.7 million during these three months by our estimates. Instead, the city is on track to collect a little over $20 million, which means that the city is starting its new fiscal year with its beverage tax collections in a deep hole, over 20% below the levels that would put them on track to hit their projections. 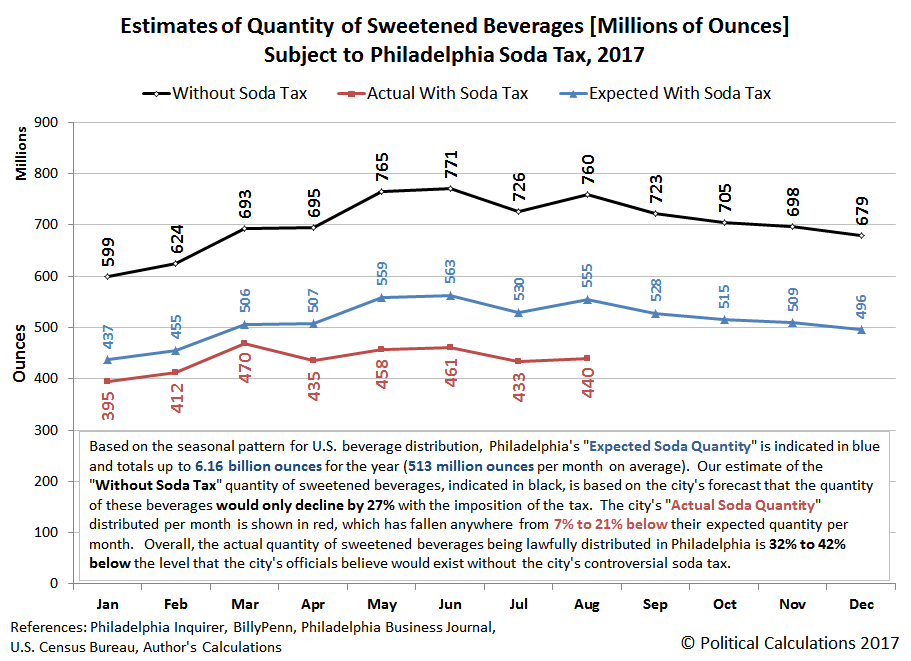 Since Philadelphia's soda tax went into effect in January 2017, the total volume of taxable beverages distributed in the city has dropped anywhere from 32% to 42% below the levels that would have existed in any given month if not for the tax.

Losses in Sales, Hours and Jobs

The negative impact of Philadelphia's soda tax was recently quantified by a food marketing professor at Philadelphia's St. John's University in a study funded by the American Beverage Association:

John Stanton, a professor of food marketing, compared sales of five stores inside Philadelphia and four outside the city — all part of the same unnamed supermarket chain — before and after the tax went into effect.

Stanton said the average monthly loss in sales per Philadelphia store — in addition to the loss they were already experiencing — after the tax went into effect was $304,322.

“There is almost no scenario that would lead one to believe that the Philadelphia beverage tax will permit supermarkets to maintain existing labor forces,” Stanton wrote.

The Greater Northeast Philadelphia Chamber of Commerce has a little more detail on how the tax has impacted area grocers:

“We know that shoppers are going outside the city to buy their beverages and they are taking all their grocery dollars with them,” Brown said....

The loss of sales in Brown’s ShopRite stores has also been met with a decrease in labor. “We are cutting back hundreds of work hours and not filling open positions,” Brown wrote. “I have 210 fewer associate positions in my stores this year as a direct result of the beverage tax. And I’m not alone. This trend is happening at stores around the city.”

Similar stories are emerging from Chicago, which implemented its own version of a soda tax in 2017.

Joseph Butera, owner of the supermarket chain bearing his family's name, said ever since the soft drink tax went into effect, beverage sales have dropped.

"At our store in Norridge, for example, our beverage sales are down 47 percent," he said....

Valley Produce owner Laurie Tenutia said stores not only are losing beverage sales, but other food sales, as shoppers pick up other groceries outside Cook County when they go to buy soda and other sugary drinks.

"They're not going to come to us just for groceries anymore. They're going to go make the one stop, and buy whatever they need. So we are going to drop drastically in sales. Our business, because of it, has dropped 11 percent," she said. "Sadly, lower sales mean that we have to cut down hours for all of our working employees."

Hacks to Get Around the Sugary Drink Tax

In addition to voting with their feet to lawfully avoid the tax by shopping for beverages and groceries outside of the cities where the tax has been implemented, consumers have a variety of interesting options to get around the beverage tax. The Chigago Tribune's editorial board mentioned some loopholes in that city's inconsistently applied sugary drink tax:

When Cook County voters got their first look at those receipts Aug. 2, they were furious. Not just at the whopping surcharge, but at its haphazard application: Diet soda is taxed, chocolate milk is not. Pre-sweetened tea is taxed, sweetened tea made to order is not. Milkshakes and lattes get a free pass, as does any sugar-laden bomb that has to be chewed instead of sipped.

The tax is supposedly meant to prevent obesity, heart disease and diabetes. But it penalizes adults who drink sugar-free sodas, while sparing those who drink frappuccinos — as long as they're prepared to order and not bottled, that is. Those contradictions are cavalierly dismissed by supporters of the tax, who seem incapable of understanding why consumers feel they've been lied to. Sigh.

But special props go out to the staff of Billy Penn, who came up with creative ways to both avoid Philadelphia's soda tax and still get the sweetness they crave without having to leave the city or pay into the tax in the following video.

Billy Penn has since gone on to confirm that untaxed powdered mixes for sweetening beverages are popular in Philadelphia, while we found evidence that alcohol sales are uniquely up in the city.