It's Thanksgiving Week 2017, and here at Political Calculations, that means that we'll be devoting the whole week to exploring the centerpiece of this uniquely American holiday in keeping with our annual traditions.

But that doesn't mean that we won't be discussing things like the stock market either - we'll just be loading it up with a healthy serving of Thanksgiving turkey.

Let's get started by doing just that, where we'll update the chart showing our favorite spurious correlation of all time - the apparent relationship that exists between the average live weight of U.S. farm-raised turkeys and world stock prices. The following chart updates that relationship through this point of time in 2017! 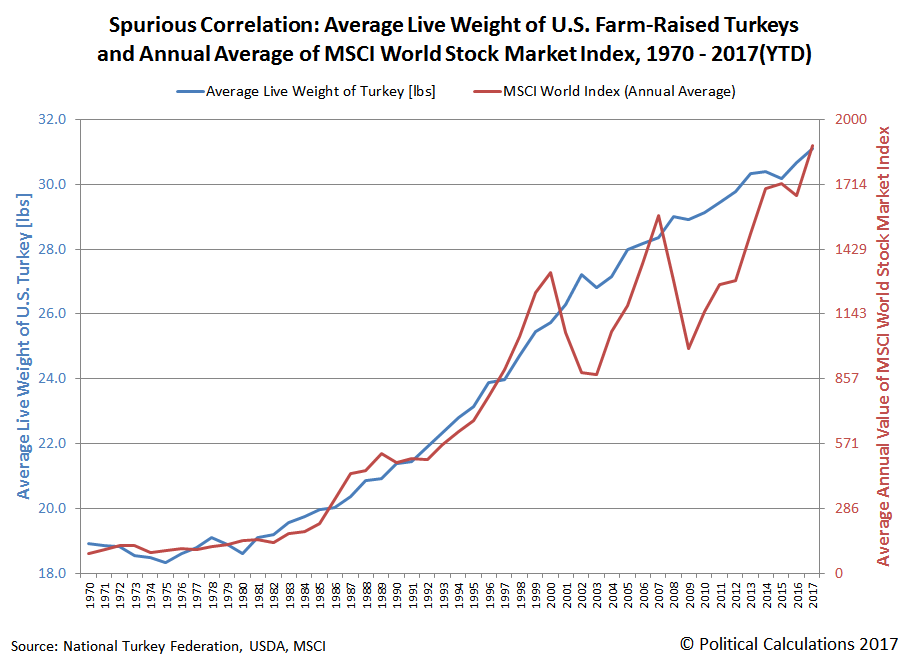 If you're the type of person who believes that they can divine the future from any synchronous patterns you identify on charts showing apparently strongly correlated data like this - and the correlation here is indeed strong with an R² of 0.9717 - you should be very worried about the potential for a stock market crash in the near term, seeing as the chart shows that every time that the MSCI world stock index has risen higher than the proportionately scaled average live weight of U.S. farm-raised turkeys, a major correction hasn't been far behind.

We'll also tell you that even after detrending the data to account for the rising linear trends for both data series, the correlation doesn't disappear as you might suspect would happen for a fully spurious correlation. Instead, the R² drops to 0.5315, which might be considered to be a moderately-strong correlation.

And yet, we're happy to confirm that the apparent correlation is genuinely spurious. It's total garbage - the growth of the average weight of turkeys raised on farms in the U.S. is not, in any way that we can identify, connected to the growth of global stock prices.

So when you see charts showing these kinds of seemingly-correlated relationships, take them with a strong grain of salt! You should, at the very least, be able to identify some connection that logically links the two data series being compared. Without such a connection, you're likely just looking at something that, while it might be fun to consider, probably doesn't have much bearing upon or connection to the real world.

Speaking of which, since we've opened the door, if you're reading this article on a site that republishes our RSS news feed that also allows comments, please share your links to examples of fun-but-false correlations. At the very least, the exercise might help you avoid the social disaster minefield that you would find yourself in if you're foolish enough to start talking up politics at this year's Thanksgiving feast by arming you with better and more interesting discussion topics.

Update: If you like puzzles and would like to take on an extra challenge over the holiday, you might consider looking into our detrending observation, where the trends that need to be subtracted from both series to properly detrend them are perhaps not linear ones!