We think that GE's stock price has further to fall before it bottoms. 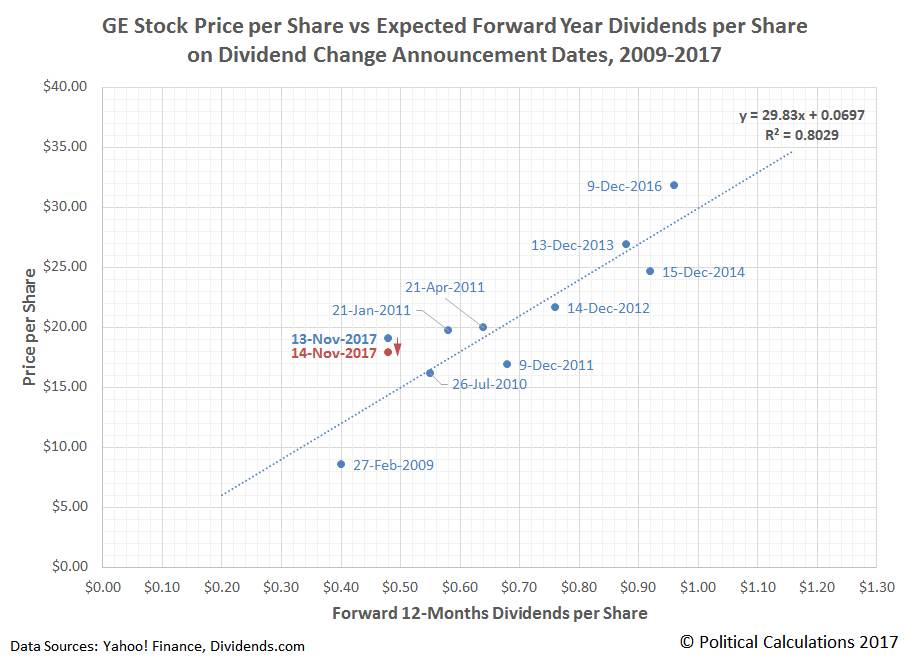 The relationship in the chart above was developed using the company's share price on the dates it announced changes in its dividend payouts to the public with and the company actually paid out in dividends during the following 12 month period. The exception is the announcement for 13 November 2017, where we've projected that the company will sustain its newly lowered dividend payment of $0.12 per share over the next year.

What that result suggests is that the company's share price has further to fall. Based on this first cut analysis, we would anticipate GE's share price continuing to fall to the $14-$16 per share range in the near future.

To build the case that is likely to happen, what we really want is more data points. We'll revisit this analysis soon where we'll incorporate data from GE's dividend declaration dates to build up the sample for our simple linear regression analysis.

Update 19 November 2017: We've followed up to include stock price and forward year dividend data from GE's dividend declaration dates. The updated chart, in which we've also connected to dots to trace GE's stock price trajectory versus its expected future year dividends per share, doesn't change very much from what we found in our original, more limited, sampling. 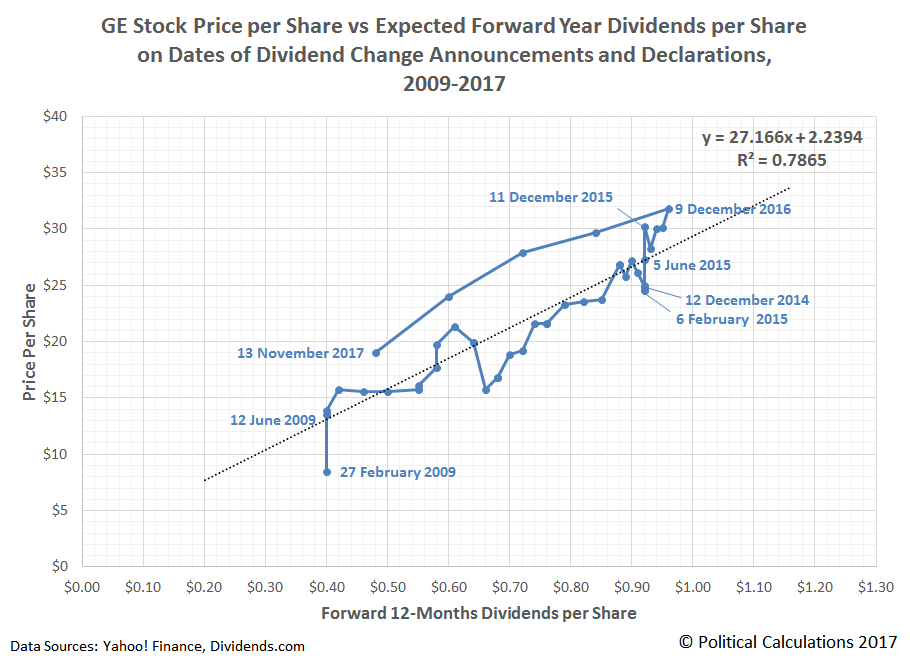 We do however observe an important shift in the relationship between GE's stock price and its future dividends per share during 2015. Here, on 10 April 2015, GE announced that it was selling off real estate and other assets associated with its GE Capital unit. In addition to clearing the path to where GE Capital would be taken off the U.S. government's "Too Big To Fail" list on 29 June 2015, freeing the company from additional regulatory costs and burdens that had been imposed upon it after the financial crisis of 2008. More importantly, the move also provided a lump sum of cash that GE's board of directors used to help fund a buyback of $50 billion worth its shares.

The reduction of regulatory costs and also its significant reduction in its number of outstanding shares helped boost the stock price with respect to its future year dividends per share - in effect, putting that relationship onto a parallel, elevated track, which is suggested in the chart above.

As for our outlook for GE's share price, we still believe that it still has further to fall, but not quite as far as our earlier analysis indicated, where we would now put the bottom into the $15-$17 range.

GE's Dividend Change Announcements from 2009 through 2017

We began developing this form of analysis earlier this year! Here are the previous posts in the series....