Over the last two weeks, the S&P 500 continued its slowly upward trajectory and set new record highs, closing above 2,600 for the first time ever on the Friday following Thanksgiving 2017.

From our perspective, investors appear to be closely focused on the distant future quarter of 2018-Q2 in setting current day stock prices. 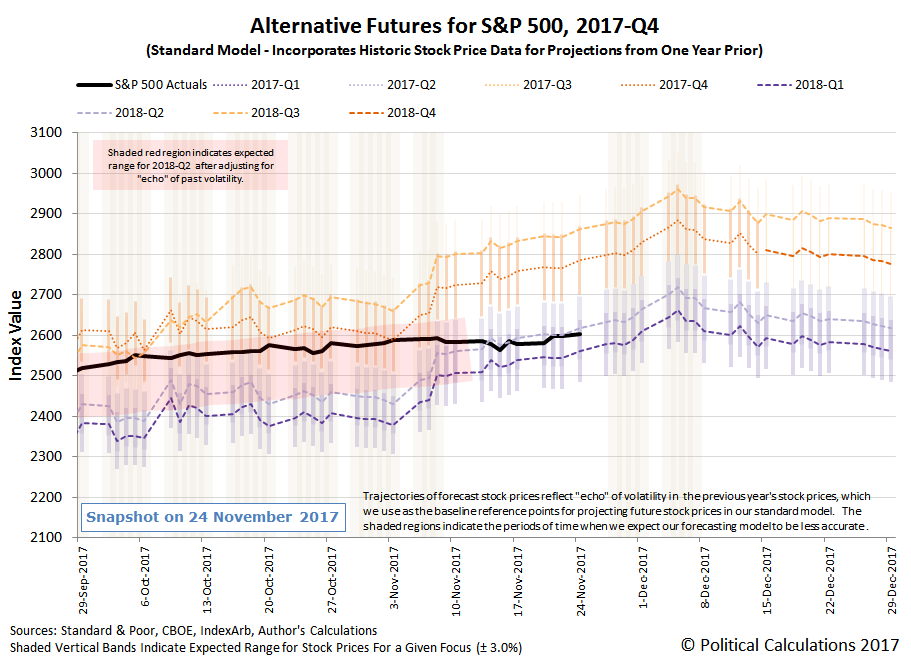 There's an important caveat to note at this point however. Following the release of the minutes from the Fed's Federal Open Market Committee meeting on 31 October-1 November 2017 meeting, which confirmed that the Fed is all but set to announce a hike in short term U.S. interest rates at the end of its' 13 December 2017 meeting, the CME Group's FedWatch tool is now indicating that there is over a 50% probability that the Fed will move to hike short term U.S. interest rates again by the end of the first quarter of 2018, rather than waiting until the end of 2018-Q2 as the futures for the Federal Funds Rate had previously indicated.

With investors shifting their focus to that nearer-term future quarter, our dividend futures-based forecasting model suggests that the future trajectory for the S&P 500 will likely shift downward toward the lowest alternative future trajectory shown in our spaghetti forecast chart above.

On top of that, we're also coming up on another one of those periods where the echo of past volatility in U.S. stock prices will affect the accuracy of our forecasting model, which is a consequence of our model's use of historic stock prices as the base reference points from which we project future stock prices. Since the duration of this upcoming echo effect is comparatively short, rather than add a new forecast range to the chart, we'll simply note that we expect that our standard model's forecast will overshoot the actual trajectory of the S&P 500 during the next two weeks, absent a new noise event for the U.S. stock market.

With that said, let's catch up with the major market-moving headlines that caught our attention over the last two weeks.

Over at The Big Picture, Barry Ritholtz succinctly summarized the pluses and minuses for the U.S. economy and markets for both Week 3 and Week 4 in November 2017.