Political Calculations
Unexpectedly Intriguing!
15 December 2017
How Much Diet Soda Is Safe to Drink per Day? 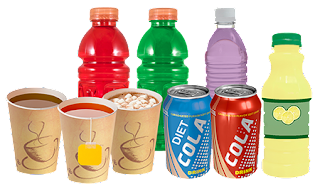 President Donald Trump drinks a lot of Diet Coke, where according to the New York Times, his daily consumption consists of as many as twelve 12-ounce cans of the artificially-sweetened, zero-calorie carbonated beverage.

That report has sent CNN into a frenzy, where the cable news channel prioritized that story over the story of the attempted terrorist pipe bomb attack in New York City's subway in its televised broadcasts on the same day.

But since that story raised questions about President Trump's health, where the effects of that apparently high level of Diet Coke consumption were called into question. The Washington Post was sucked into the story, providing a general overview of what the medical profession knows about the potential health-related risks that might arise from drinking that many cans of diet soda a day, and came away with not much insight.

It's a lot of soda to consume in one day, and — were it regular soda — most research suggests the potential consequences would be alarming. A 12-ounce can of regular Coke has 140 calories and 39 grams of sugar. By instead drinking Diet Coke, which has no calories or sugar, Trump has avoided consuming 1,680 calories and 468 grams of sugar daily.

But the effects of drinking diet soda have been long debated by experts, with some studies raising concerns about long-term health consequences. Experimental research on artificial sweeteners, like the ones found in diet soda, is inconclusive. The Canadian Medical Association Journal found in July that there are very few randomly controlled studies on artificial sweeteners — just seven trials involving only about 1,000 people — that looked at what happened when people consumed artificial sweeteners for more than six months.

Overall, most medical risks associated with high levels of diet soda consumption would appear to be very low, with the potential exception of two of its ingredients, caffeine and aspartame, where the Food and Drug Administration (FDA) and the European Food Safety Authority (EFSA) have set levels for Acceptable Daily Intake (ADI), which "is defined as the maximum amount of a chemical that can be ingested daily over a lifetime with no appreciable health risk, and is based on the highest intake that does not give rise to observable adverse effects".

That gives us enough information to be able to estimate how many cans of Diet Coke that President Trump, or for that matter, anybody, can safely drink per day to keep a low risk of adverse health effects.

So we have! In the following tool, we've used Diet Coke specific data to estimate the number of 12-ounce cans of that beverage that you might get away with drinking each day, but you are welcome to change the data to consider whatever beverage containing caffeine or aspartame you might consider drinking to work out how many units per day that you can consume within the FDA's acceptable daily intake levels. If you're accessing this article on a site that republishes our RSS news feed, please click here to access a working version of the tool on our site.

Using the tool, with the default data body weight set to be equal to what President Trump was reported to weigh at this writing in December 2017, we find that while President Trump could drink nearly 30 cans of Diet Coke and stay under the FDA's ADI guidelines for aspartame, his real daily limit is to drink the equivalent of no more than 13.8 12-ounce cans of Diet Coke per day, which would keep him within the FDA's ADI limits for "safe" caffeine consumption. At the reported dozen cans of diet soda drunk per day, President Trump is falling within those limits for his body weight.

Playing with the tool, we find that if President Trump were to lose more than 31 pounds, he would need to reduce his daily diet soda consumption to stay within the FDA's safe limits for daily caffeine intake.

As they say, it is the dose that makes the poison for any ingestible substance. Things like the concentration of ingredients within the substance being consumed and the size of the person doing the ingesting are just two of the factors that can affect the determination of what is an okay amount of consumption of any substance for an individual.

Speaking of which, the biggest factor that we haven't considered with this tool is whether diet soda is your only source for your daily caffeine and aspartame intake. The extent to which you may be ingesting additional caffeine or aspartame through other foods, beverages, medicines, etc. would reduce the amount that you would need to consume in the form of diet soda to stay within the FDA's or EFSA's guidelines.

If you don't know that extent, we would argue that it would be prudent to significantly dial back on your diet soda consumption to ensure that you don't accidentally run into the situation where you experience any of the adverse health effects that are the reason for why the ADI guidelines exist in the first place.

* Update 18 December 2017: We did some additional digging and found that the FDA doesn't actually set an Acceptable Daily Intake level for caffeine and instead simply considers it to be "generally recognized as safe". The 6.0 mg/kg/day figure appears to come from a 2003 study, which identifies a 400 mg/day "safe" intake limit for a healthy individual who weighs 65 kg (143 lb), which is fully consistent with the 6.0 mg/kg/day intake level. This study is very likely the source of the FDA's subsequent identification of 400 mg of caffeine per day as the "safe" daily intake level for adults, where the FDA may very well have lost track of how and for what weight individual that latter figure was determined in the years since 2003.