Are you ready to peer into the future for the S&P 500's quarterly dividends per share in 2018?

If so, you've come to the right place! The following chart shows the snapshot we took of the CME Group's S&P 500 Quarterly Index Dividend Futures Quotes for each quarter in 2018 on 18 December 2017, and for good measure, compares it to a snapshot we took of similar dividend futures presented by the Chicago Board of Exchange a year earlier showing what the future for 2017 was expected to be at the same relative point of time in that year. (The CBOE retired their implied forward dividend futures on 1 May 2017). 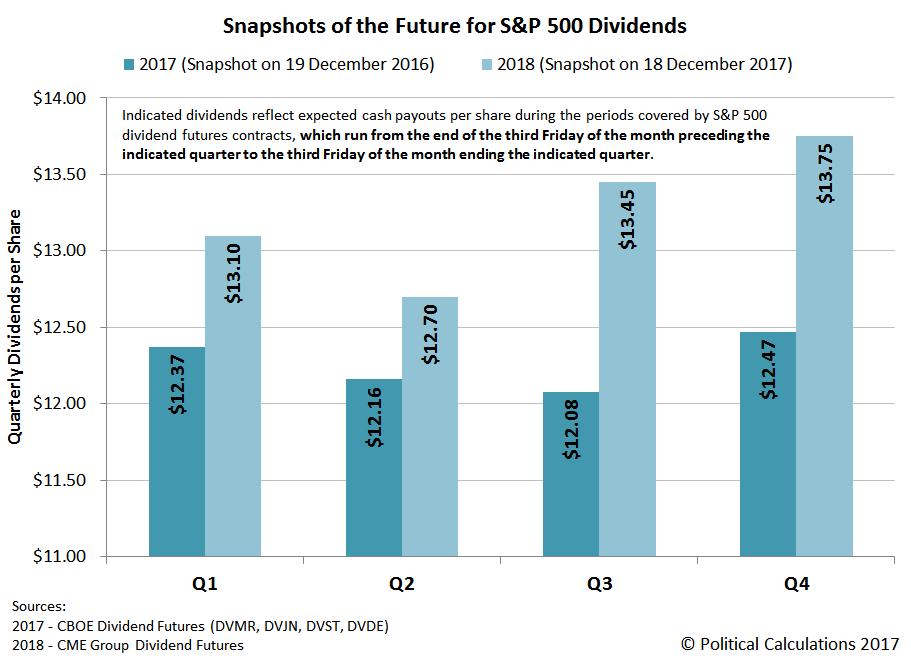 2017 was the best year for dividends on record for the S&P 500. 2018 looks to be stronger, but then, that's a primary reason why stock prices have generally grown so strongly throughout the year.

One thing to note is that these are dividend futures, which do not match the quarterly dividends reported by Standard and Poor after the end of each calendar quarter. That is because of what we describe as the term mismatch between the two, where the indicated dividends shown in the chart above are tied to futures contracts that run from the end of the third Friday of the month in the preceding quarter through the third Friday of the month ending the indicated quarter, while the values reported by S&P occur solely within each calendar quarter.

The difference between the two are most evident in the data for Q4 and Q1, where the dividend futures for Q4 tend be understated and the values for Q1 tend be overstated when compared with the values reported by S&P, which is due to larger dividend payments that are paid out to shareholders in the final weeks of each year. To give you an idea of how much that adjustment can be, we anticipate that the S&P 500's quarterly dividends in 2017-Q4 will come in around $12.70 per share when S&P reports them in the new year.