The S&P 500 behaved more as we expected that it would during the first full week of December 2017, with stock prices dipping as investors shifted their forward looking focus to 2018-Q1 in setting current day stock prices. 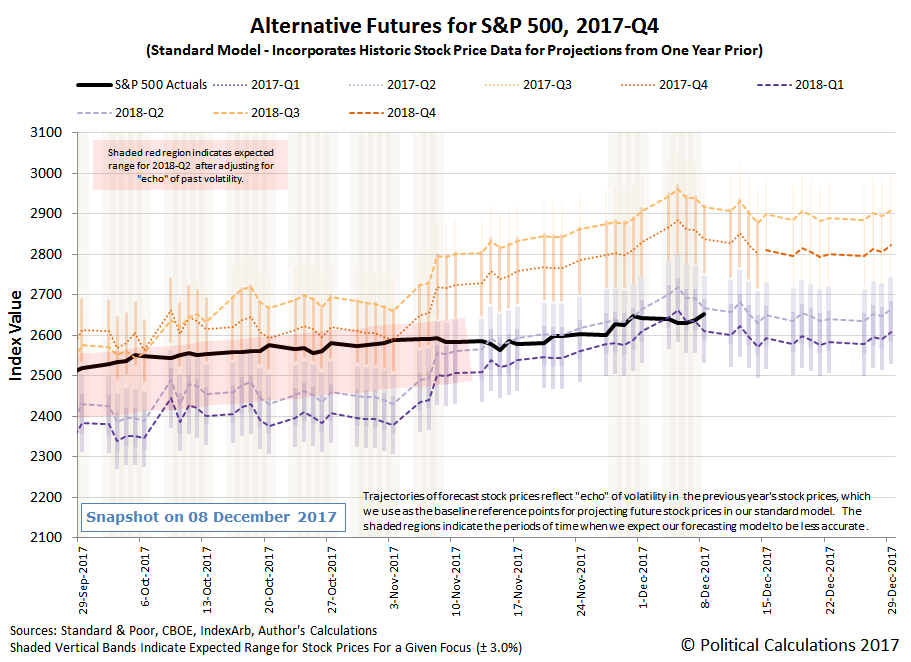 But ended up on Friday, 8 December 2017 at a level that would at first appear to be more consistent with their being focused on 2018-Q2. The reason for that has a lot to do with the positive jobs report that came out on Friday, 8 December 2017, which had the official unemployment rate hold steady from the previous month at 4.1%, but which is down a half percent from November 2016. The report was stronger than expected, which appeared to clear the way for the Fed to not just announce that they will hike U.S. short term interest rates this Wednesday, 13 December 2017, but up to three more times in 2018.

Since no hike in the Federal Funds Rate would appear to be anticipated for 2018-Q2 at this time, investors have little reason to focus much of their forward-looking attention on this future quarter, which is why we think that they are now primarily focusing on 2018-Q1, where the level of the S&P 500 is still falling within the range that we would anticipate they would be in that situation.

In any case, this upcoming week will be a big one for markets as the Fed acts and also because we'll start getting our first look at what the future holds for dividends through the end of 2018. In the meantime, here are the market-moving headlines that caught our attention during Week 1 of December 2017.

The invaluable Barry Ritholtz provides an overview of the positives and negatives for the U.S. economy and markets in the first full week of December 2017.