How well are typical American households faring through the third quarter of 2017?

To answer that question, we're going to turn to a unique measure of the well-being of a nation's people called the national dividend. The national dividend is an alternative way to measure of the economic well being of a nation's people that is primarily based upon the value of the things that they choose to consume in their households, which makes it very different and by some accounts, a more effective measure than the more common measures that focus upon income or expenditures throughout the entire economy, like GDP, which have proven to not be well suited for the task of assessing the economic welfare of the people themselves.

To get around that problem, we've developed the national dividend concept that was originally conceived by Irving Fisher back in 1906, but which fell by the wayside in the years that followed because the government proved to not be capable of collecting the kind of consumption data needed to make it a reality for decades. And then, it wasn't until we got involved in 2015 that anybody thought to try it, where we've been able to make the national dividend measure of economic well-being into a reality.

With that introduction now out of the way, let's update the U.S.' national dividend through the end of September 2017 following our previous snapshot which was taken for data available through April 2017. 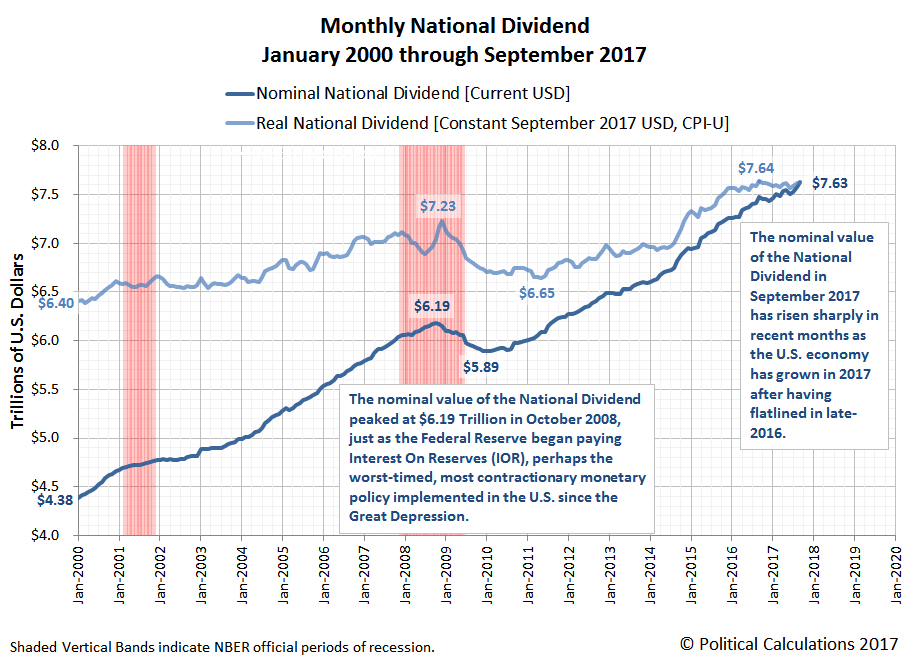 This is the first update that we've had since June 2017, which is a direct consequence of Sentier Research's termination of its monthly household income estimates data series after May 2017. We had suspended our presentation of our national dividend estimates until we developed a viable substitute for this original data source, which we've been test driving for this application behind the scenes.

What we've found so far is that our estimates for the national dividend are conservative in the period from 2015 onward, in that we believe that they are understating the amount of consumption by U.S. households, which we believe is a consequence of a change in methodology by the U.S. Census Bureau for how it collects the source data we use in our calculations. We do not as yet have enough data to establish the extent to which our estimates of national income may be understated, which we're continuing to collect and review behind the scenes. We do believe however that our measure is capturing the overall picture for the direction of the national dividend, which perhaps is a more useful indication of the relative well-being of typical American households that can be determined by this kind of analysis.