As a general rule, we don't often comment on individual stocks, much less forecast their likely trajectory, the way we do with the S&P 500. When we do, it is often because we've picked up on something interesting or contrary about the stock in question.

That was the case just over two months ago, when we focused rather specifically on the situation of General Electric (NYSE: GE), where we indicated that the company's stock price "had further to fall", even after the company had just announced that it would slash its dividends per share in half.

At the time, GE was trading at $18 per share, where we initially anticipated that it would fall to trade within a range between $14 and $16 per share. Just a few days later, after doing a more refined analysis incorporating more historic data points defining the relationship between the company's share price and its expected forward twelve month dividends per share, we revised that target range to be slightly higher, where we projected that GE's share price would drop to be somewhere between $15 and $17 per share.

Two months later, despite having benefited from the general market exuberance associated with the passage of the Tax Cuts and Jobs Act of 2017 in the meantime, our revised projection for the future of GE's stock price has come to pass, allowing us to close the window on what we had predicted would happen in the "near future". 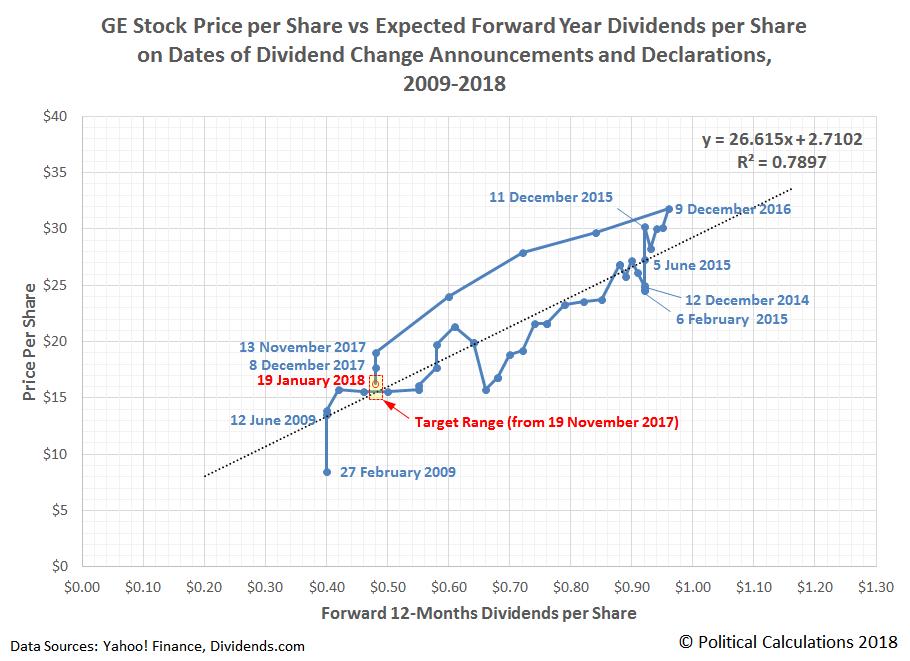 The proximate cause for GE's sudden decline in fortune into our projected target range during the last week was the revelation that the company would have to take a significant charge to its books from an old venture where the company's insurance division issued long-term care policies where the company underestimate its risk of negative exposure. Although the company stopped issuing new policies years ago, new claims against its existing portfolio will drain cash that the company doesn't have, even after the passage of permanent corporate tax rate cuts in the U.S.

GE's new CEO, John Flannery, has also raised the possibility that the industrial conglomerate will split itself into several different, independent companies as part of its overall restructuring.

There is a very high likelihood then that GE, as we have known it, has itself come to pass. Its future now very much hinges on how much traction that Flannery can get in turning around GE's fall as a whole, and whether or not he can avoid having to divvy up what remains of what once was one of the biggest of all the blue chips in the U.S. stock market, if not the world.

Update 7:40 AM EST: GE's earnings are out - in 2017-Q4, the company's revenue dropped by 5% from the previous quarter, driving a $10 billion loss. There was some good news however, as GE generated more cash ($7.8 billion) from its operating activities than had been expected ($7 billion).

It's the kind of report that is driving schizophrenia over at The Street, which featured the following two stories (or updates) this morning:

The company will be having a conference call with investors at 8:30 AM EST this morning.

Update 11:08 AM EST: Well, an SEC investigation can certainly take some of the wind out of a stock price's sails!