Falling between the Christmas and New Year's holidays, not much of newsworthy note happened for the S&P 500 during the fourth week of December 2017 and the final week of that year. 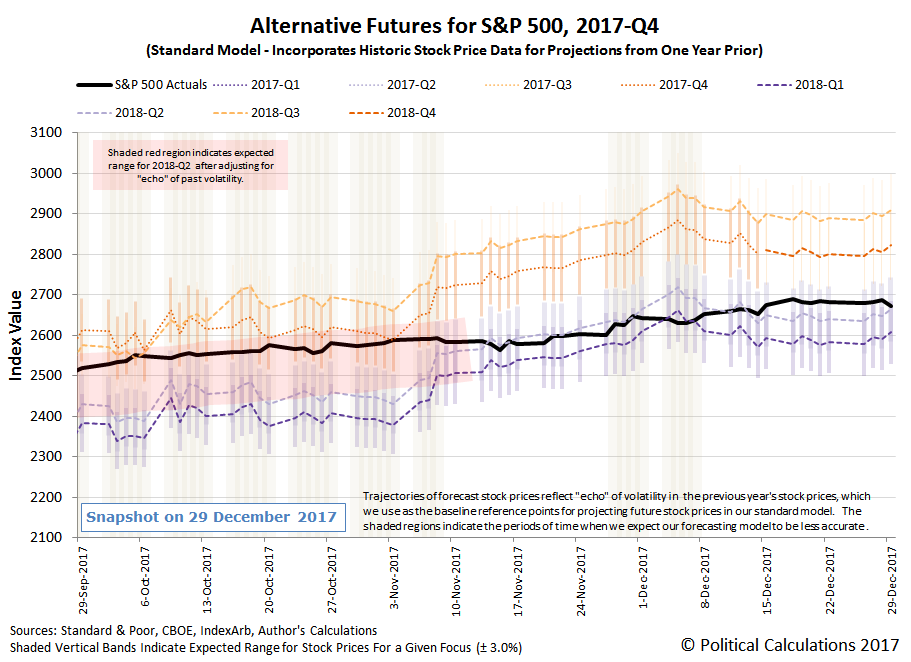 Consequently, the S&P 500 mostly moved sideways during Week 4 of December 2017 before dipping by 0.5% to close at 2,673.61 on Friday, 29 December 2017, the last trading day of 2017. Most of that decline happened during the last half hour of the day's trading, suggesting that it wasn't motivated by much more than opportunistic year-end profit taking during a week that featured very light trading volumes.

The headlines of the week that was point to a very slow week for market moving news indeed.

Finally, Barry Ritholtz provides a succinct summary of the positives and negatives for the U.S. economy and markets in the year ending fourth and final week of December 2017.

The alternative futures charts that we present each week show the actual trajectory that the S&P 500 takes with respect to the backdrop of where our dividend futures-based model projects that they would be depending upon where stock prices are in the present and have been in the recent past, as well as how far into the future investors might be looking on any given day.

That's a lot of moving parts of which to keep track, so for fun, we've put together the following animation showing the evolution of the S&P 500 through selected key dates in the months ending each quarter of 2017. In the chart, the black line represents the daily closing value of the S&P 500, while the colored lines and bands represent where our model projects that the S&P 500 would be when investors have focused their forward-looking attention on a specific quarter in the future.

We like this kind of presentation because of the way it captures how the expectations that investors have for the future either filled in or changed throughout the year! In fact, if you pay attention to the alternative future trajectory associated with 2017-Q4, you can see it swing upward by 300 points from the end of 2016 to the end of 2017, which gives a sense of how fluid expectations of the distant future can be.

Because our model uses historic stock prices as the base reference points from which it projects future stock prices, the vertical tan/brown bands indicate when we anticipated well in advance that our model's projections would be less accurate because of the "echoes" of past volatility in stock prices. In our quarterly charts for 2017, we occasionally added an additional forecast range (shaded in red) to account for this echo effect, where we made specific assumptions about the trajectory that the S&P 500 would take during the periods where we anticipated that our model's projections would be off for prolonged periods of time (the animation above excludes these shorter-term predictions). If you would like to see how well we did at forecasting where the S&P 500 went whenever we chose to add a so-called "red-zone forecast" to our alternative futures charts, please follow the links below:

All together, our three red-zone forecasts spanned 81 of the 251 trading days of 2017. On 79 of those days, the S&P 500 closed within the specific range that we indicated at the beginning of each forecast. These results suggest that our "connect the dots" approach for adapting our forecast model to account for the echo effect of the past volatility in stock prices on its projections of future stock prices is at least somewhat effective.

The following chart reveals what our dividend futures-based model anticipates for the S&P 500 in 2018, from the vantage point of the close of trading on the last business day of 2017. 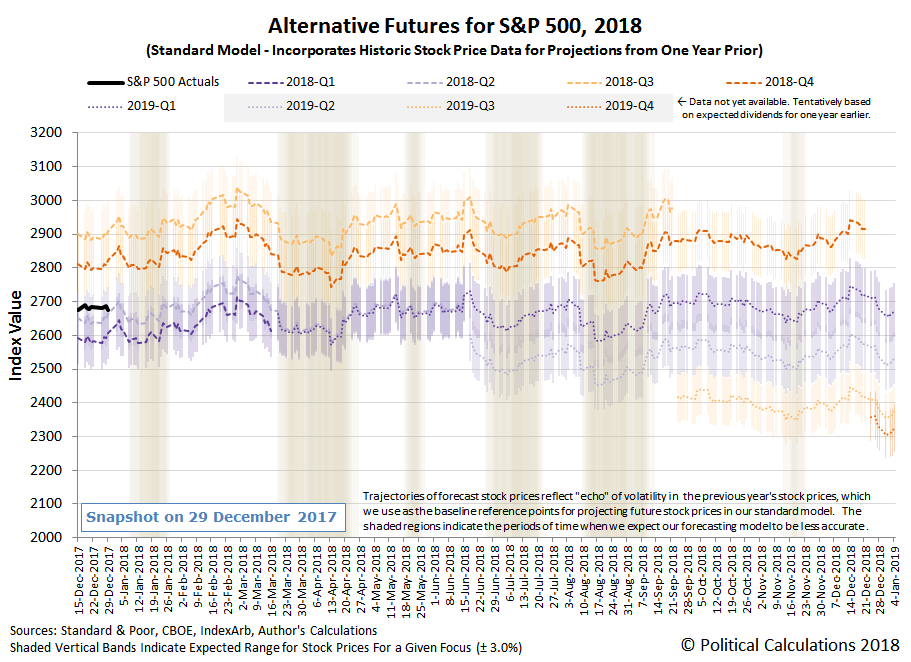 If you go back and review our animation for 2017, you'll see that our model tends to perform best when looking just one quarter ahead at a time, which is why we have typically only presented charts showing the current quarter in this long-running series. The truth is that expectations of the future are continually changing by enough where there isn't much value in looking much further beyond three months ahead in time on any given day with our model. With that in mind, let's zoom in on the future for 2018-Q1: 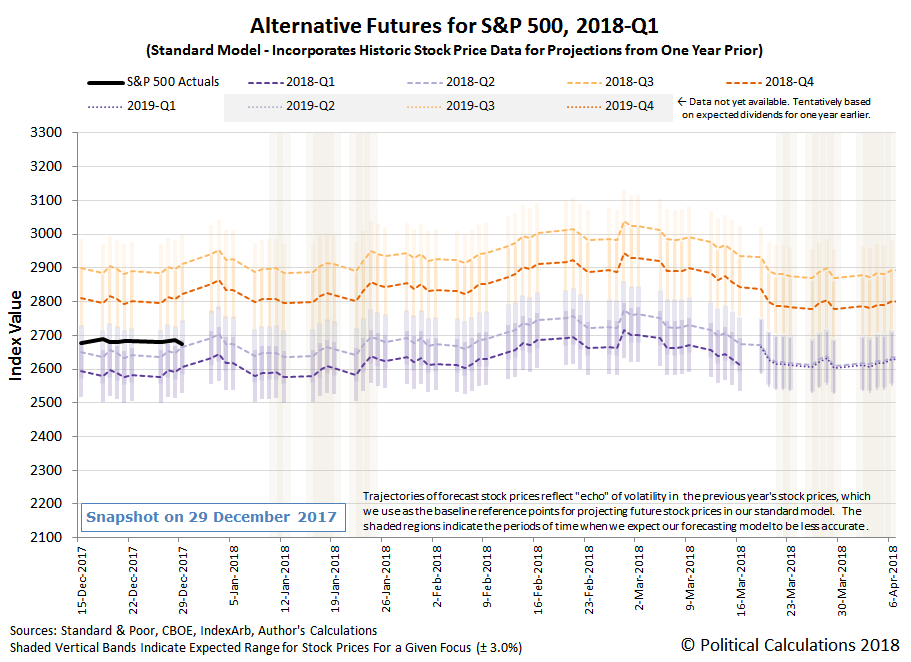 Going into 2018, although stock prices would seem to be tracking along with what our model projects would be the case if investors were primarily focusing on 2018-Q2, we believe that investors are presently splitting their forward-looking attention between 2018-Q1 and 2018-Q3.

Here's why we're thinking that. 2018-Q1, and specifically, 21 March 2018 coincides with the expected timing of the Federal Reserve's next change in short term interest rates, where the CME Group's FedWatch tool is currently giving a 67.5% probability of a quarter-point increase being announced on 21 March 2018, up sharply from the 55% it was indicating at the end of 2017.

Looking beyond that first rate hike for 2018, the Fedwatch tool is also projecting a greater than 50% probability for another quarter-point rate hike this year that would come in 2018-Q3, and perhaps as early as 1 August 2018, although by 26 September 2018 remains more likely. At present, investors would appear to be more heavily weighting their forward-looking focus on 2018-Q1, where we would recognize a significant upward movement in stock prices should they shift more of their focus toward the more distant future quarter of 2018-Q3.

An alternative explanation for what we're currently observing is that investors are mostly focused on the current quarter of 2018-Q1, but the recent passage of the Tax Cuts and Jobs Act of 2017 is adding a positive speculative boost to current day stock prices above the level where today's available dividend futures would place them if they were solely focused on 2018-Q1.

As the members of corporate boards return after the holidays and meet to set their firms' dividend policies in the new year, we'll see how much of that speculation turns into a more tangible form of expectation, but for right now, we're not seeing any change in the future expectations described by quarterly dividend futures, which haven't as yet changed since the end of 2017.

We'll find out soon enough which explanation better describes how investors are weighing the future for the S&P 500 in 2018. Stay tuned!