Political Calculations
Unexpectedly Intriguing!
12 February 2018
A Continuing Wild Ride for the S&P 500 in Week 1 of February 2018

Extreme choppiness was the name of the game for the S&P 500 (Index: INX) in the first full week of February 2018, as the Lévy flight crash that started last week continued to wreak havoc on stock prices.

The following chart updates the one we featured in our "chaotic carnage" post last week, which confirms the extent to which the market's previous period of calm and relative order has broken down. 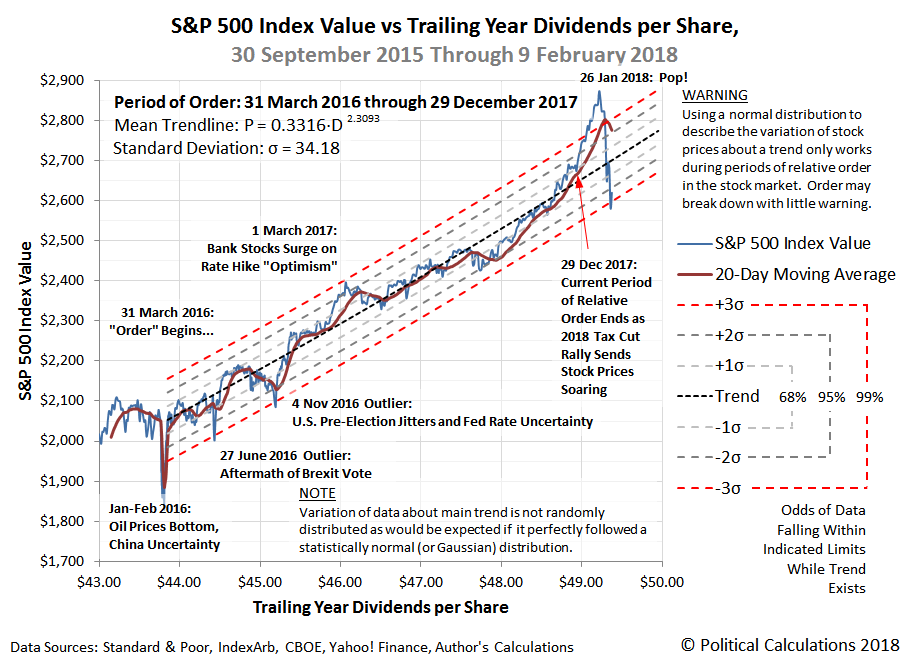 As for what prompted the sudden Lévy flight crash, there are quite a few candidates for consideration. For a solid overview, we'll point you toward some of the more insightful analysis that we've seen in the past week, where we'll encourage you to follow the links provided by the authors of each article for more information:

From the perspective of our dividend futures-based model of how stock prices work, we see the sudden decline of stock prices as simply a change in how far forward in time investors are looking, where the different expectations for the rate of change of dividend growth at different points of time in the future would appear to explain most of the change in stock prices, where we've seen investors myopically shift their focus from the distant future quarter of 2018-Q4 all the way back to the current quarter of 2018-Q1. For our model, when the gap between these different expectations are wide and investors shift their attention from one point of tiem in the future to another, the result will either be a Lévy flight rally or crash depending on the direction of the change in how far into the future investors are focusing their attention.

That explains most of what we've observed to date, but not all. For us, this event is the first real opportunity that we've had to identify the potential limitations of our model in a real-world test that we really haven't had since we first began developing it nearly 10 years ago when the market was already undergoing a fundamentally-driven crash event. Following George Box' wisdom that "all models are wrong, but some are useful", we also took a stab last week at identifying where stock prices might be likely to go next if the S&P 500 was near the end of its Lévy flight crash event. 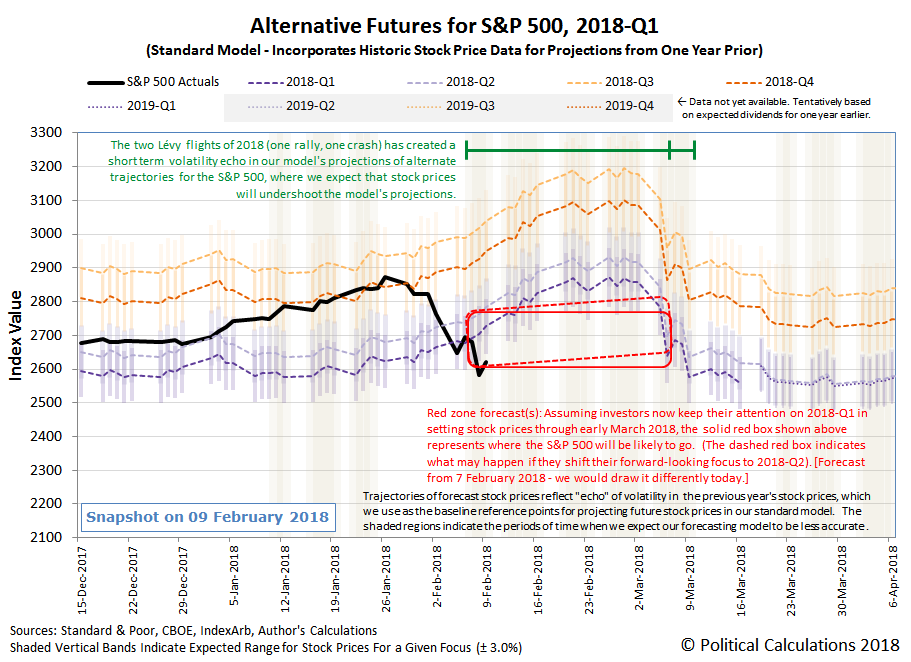 As events went on to prove later during the week, we attempted our "red-zone forecast" too soon, where for our connect-the-dots approach to work, we would need to connect the distant future end of our forecast range to a point outside of the period affected by the echo of the recent surge of volatility in stock prices in our model's projections. Given the market's recent volatility, it may be some time before we know where that point of time in the future is.

Still, even though we know it's wrong, we're going to leave the red-zone forecast as shown, because it marks a useful threshold for us in testing the limitations of our model. If stock prices break significantly below the forecast range, without a corresponding decline in the expectations for future dividends, that will confirm for us that factors outside of the scope of the model are driving stock prices.

That's one reason why we pointed to a potential investment opportunity related to the dividend futures that we use in our model last week, which haven't budged since mid-to-late December 2017. The willingness of investors to pick up what seems at this point to be money on the sidewalk can help provide us with the updated information that we need about the state of expectations for dividends that will let us get a clearer picture of the future.

As long as we're on the topic, our model is also limited in that, outside of changes in the expectations for future dividends, it only tells us when and in what direction investors shift their forward-looking attention during these kind of Lévy flight events. It doesn't tell us why they have changed how far into the future they're looking, which is why we make a point of paying attention to news headlines that might have some market-moving potential. Week 1 of February 2018 had no shortage of news....

Barry Ritholtz listed the positives and negatives for the U.S. economy and markets for the first full week of February 2018 - surprisingly, the movements in stock prices made both sides of the list.

It's definitely an exciting time in the market!