Political Calculations
Unexpectedly Intriguing!
March 7, 2018
Reaching the End of the Red Zone with the S&P 500

From time to time, we take on the specific challenge of forecasting where the S&P 500 will over an extended period of time.

That's usually because of a limitation of our dividend futures-based forecasting model, where because we use historic stock prices as the base reference points from which we project future stock prices, we occasionally have to deal with the echoes of past volatility and their effect upon our model's projections. Most often, we know well in advance, up to 12-13 months ahead of time, when what we call the echo effect will affect our model's projections by skewing their accuracy for the duration of the echo event, where we've experimented with various methods over the years to cope with the issue.

A little over a month ago, we were caught by surprise when we realized that our model had picked up a short term echo that would throw our model's projections of the S&P 500's likely future trajectories off by somewhere around 100 points, which is a direct consequence of the breakdown in order that occurred in the market beginning after 29 December 2017. A new echo had formed, where we would have the opportunity once more to generate a new manual forecast for the S&P 500 over a period of at least four weeks.

When we take that step, we call it a "red-zone" forecast because we are basically drawing red boxes on our spaghetti forecasting charts generated by our standard model of how stock prices work to indicate the range into which we expect the S&P 500 will close each day during the period of the manual forecast. We posted that emergency red-zone forecast before the market opened on 7 February 2018, where we also laid out our assumptions:

From the end of trading on Friday, 26 January 2018 when it closed at its all time high of 2,872.87 to the market close on Tuesday, 6 February 2018 when it rebounded from the previous day's crash to close at 2,695.14, we estimate that the S&P 500 lost over $15.9 trillion of its market capitalization. Since that's a lot of money to have so suddenly evaporated over the last seven trading days, we imagine that a lot of investors are asking if Tuesday's rebound marks the end of the market carnage.

Nobody will know the answer for sure for some time yet, but we do see an intriguing possibility that it has. If we're right, and the sudden, sharp drop and highly volatile trajectory of stock prices has indeed all been part of a Lévy flight event, it may indeed be over except for some higher-than-typical levels of daily volatility, because it would appear that investors have completed shifting their forward-looking attention from the distant future quarter of 2018-Q4 all the way back to the current quarter of 2018-Q1, since such shifts in forward-looking focus are the drivers of this kind of volatility in our dividend futures-based model of how stock prices work. 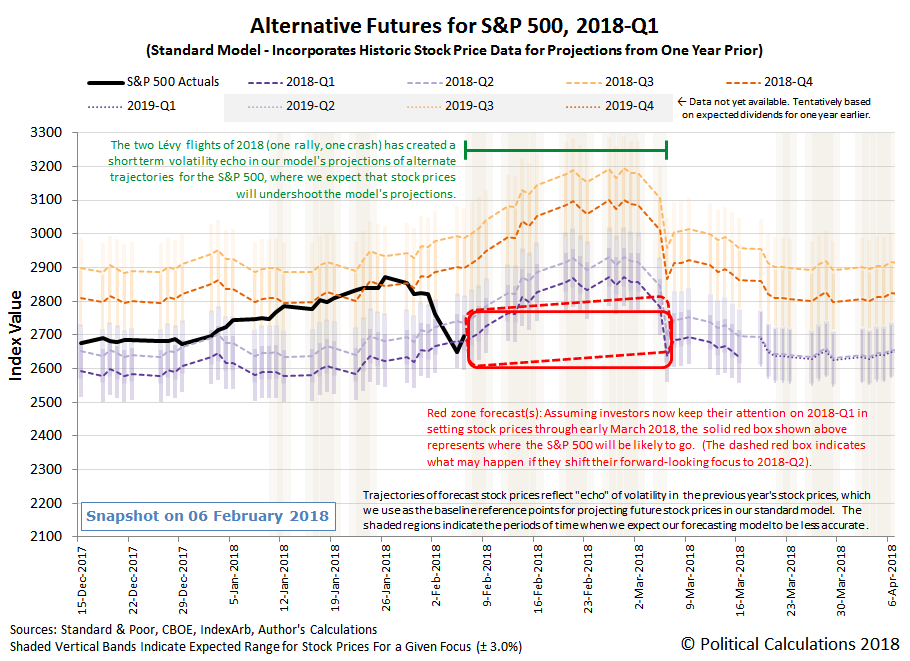 Our alternative futures chart above updates and modifies the version we first presented back in the early hours of Monday, 5 February 2018. Let's talk through the updates:

Our red-zone forecast that began on 7 February 2018 extended through yesterday, 6 March 2018. The following chart shows the results of our manual forecasting exercise. 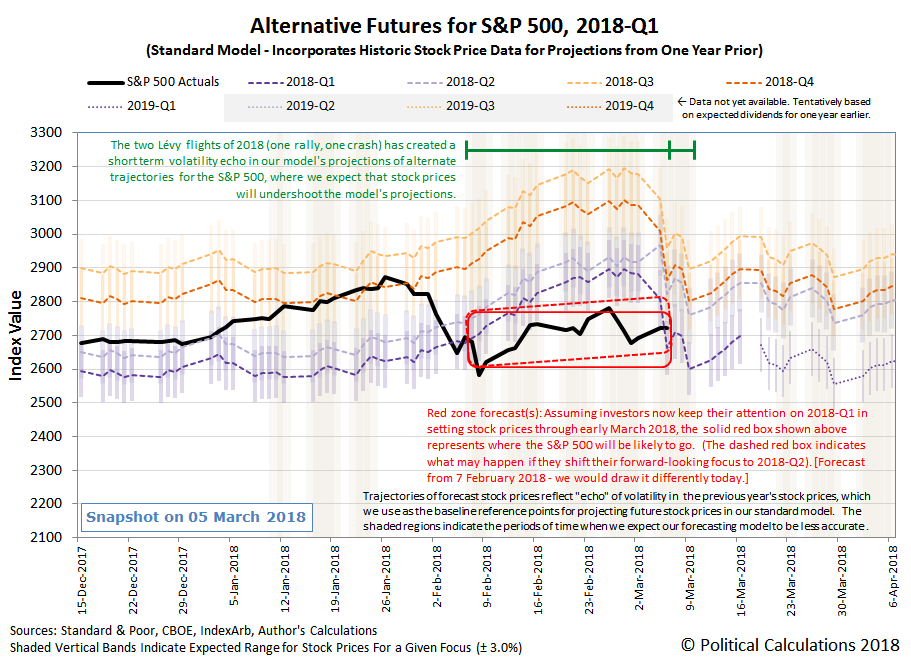 We've indicated in the chart above that we would draw the forecast range differently today, and truth be told, that text has appeared on all the intermediate charts that we've presented beginning with the one we featured back on 12 February 2018. Based on what we knew at that later date, we would have drawn the red-zone forecast boxes to cover a longer period of time into the future, and we would draw them to be wider to accommodate the elevated level of volatility that was clearly evident in stock prices.

And now, we've reached the end of the latest red zone forecast for the S&P 500, where strange times for the market appear to lie ahead, at least if the news headlines over the past week and a half are any indication....

Bad cop: Trump declares won't back down on tariffs, does not expect trade war

At The Big Picture, Barry Ritholtz found that numbers of positives and negatives for the U.S. economy and markets in the final week of February 2018 weighed in favor of the negatives.

We'll pick up the stock ticker tape again on Monday, 19 March 2018. By then, investors will have definitively shifted their forward-looking focus away from the current quarter of 2018-Q1 to .... Well, if you knew that, you would have a pretty good handle on where stock prices will go next, wouldn't you? We'll just have to see how much of a wild card the trade picture is for generating noise in the market!