Last week, the stock prices of one particular class of companies crashed after regulators at the U.S. Federal Energy Regulatory Commission acted to terminate a tax benefit that it had previously allowed.

Here's an excerpt from the FERC's official 15 March 2018 press release:

The U.S. Court of Appeals for the District of Columbia Circuit in United Airlines, Inc. v. FERC, (827 F.3d 122 (D.C. Cir. 2016) held that FERC failed to demonstrate there was no double recovery of income tax costs when permitting SFPP, L.P., an MLP, to recover both an income tax allowance and a return on equity determined by the discounted cash flow methodology.

The Commission today acted in response both to the court remand and comments filed in response to an inquiry issued after the court ruling. FERC will now revise its 2005 Policy Statement for Recovery of Income Tax Costs so that it no longer will allow MLPs to recover an income tax allowance in the cost of service.

Normally, the intersection of federal tax laws, regulations and accounting procedures would make most investors' eyes glaze over with extreme boredom, but the market's response to the FERC's announced change was both swift and dramatic.

MLPs are tax-exempt corporate structures that pay out profit to investors in dividend-style distributions. In 2016, a U.S. Appeals Court ruled that energy regulators were allowing these companies to benefit from a “double recovery” of taxes.

On Thursday, the U.S. Federal Energy Regulatory Commission (FERC) said the companies, largely oil and natural gas pipeline firms, will no longer be allowed to recover an income tax allowance as part of the fees they charge to shippers under a “cost of service” rate structure.

This could affect MLP earnings, and as a result shares stumbled. The Alerian MLP index, which tracks a number of pipeline firms, fell as much as 9.4 percent on Thursday to its lowest since February 2016.

The stock market tape for the Alerian MLP index (NYSE: AMLP) reveals the carnage for the nation's Master Limited Partnerships (MLP), many of which were specifically set up under that legal structure to support the distribution of natural gas and oil within the U.S.: 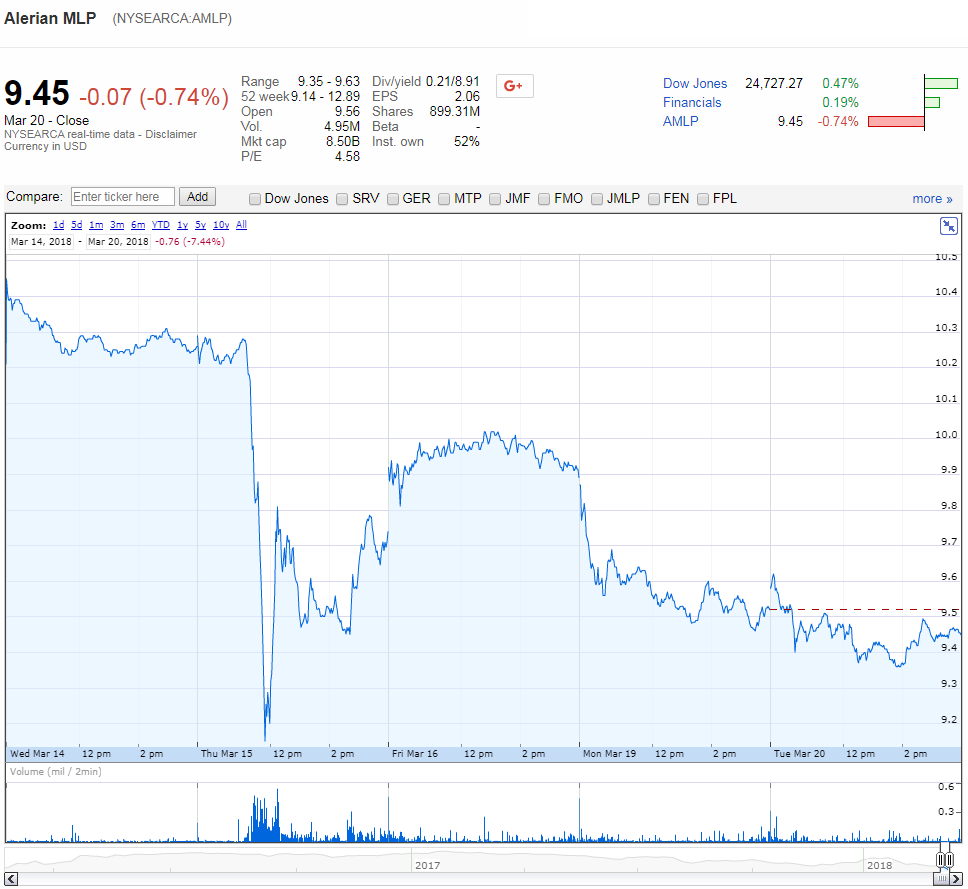 You can see almost the exact moment in time when the FERC made its announcement of its new policy on 15 March 2018, which looks like came out somewhere between 11:06 AM and 11:10 AM Eastern time.

For investors, the change in tax allowances means that companies structured as MLPs will have reduced revenues, which in turn, will reduce the amount of money available to pay what had been high-yielding dividends to their shareholders.

And though these companies have yet to announce changes in their dividend policies, their stock prices swiftly declined in anticipation of that outcome. One MLP, Williams Companies (NYSE: WMB) saw its share price drop by nearly 11% on 15 March 2018, which proved to be the biggest loss of any component company of the S&P 500 that day.

One question going forward is how many of these firms will seek to restructure themselves or that might seek to consolidate in light of the FERC's new tax allowance policy. What might at first seem like an arcane tax regulation change will likely have a significant impact on what the future will look like for the U.S. natural gas and oil pipeline industries.

And if changes in a corporate income tax allowance that affects a small number of companies can do that to their stock prices, imagine what new tax on total revenue like the EU's proposed 3% tax on the gross digital revenues of tech companies in the European Union like Amazon (NASDAQ: AMZN), Apple (NASDAQ: AAPL), Alphabet (NYSE: GOOGL), and Facebook (NYSE: FB) might do to their stock prices. And to the S&P 500, since these firms account for nearly 10% of the entire market cap of the stock market index.