What a difference a week makes!

Last week, we were on very firm ground in noting that President Trump's proposed tariffs were having very little impact on stock prices, where we closed our weekly observations with the following comment:

We're making a point of noting the major international trade-related headlines, where U.S. President Trump's planned tariffs are certainly getting lots of attention, but through the first half of March 2018, we'll agree with Goldman Sachs' assessment that stock prices really aren't reflecting much of a concern over the probability of a broad trade war. Despite what the headlines are indicating, what we are seeing so far is mostly consistent with the typical levels of noise that have historically characterized the day-to-day volatility of stock prices. We'll continue paying attention to both trade headlines and stock prices to see if that apparent investor response continues.

That remained through through Thursday, 22 March 2018, where we observed the investors complete their transition in shifting their forward-looking attention from 2018-Q2 just over a week ago to the much more distant future quarter of 2019-Q1. 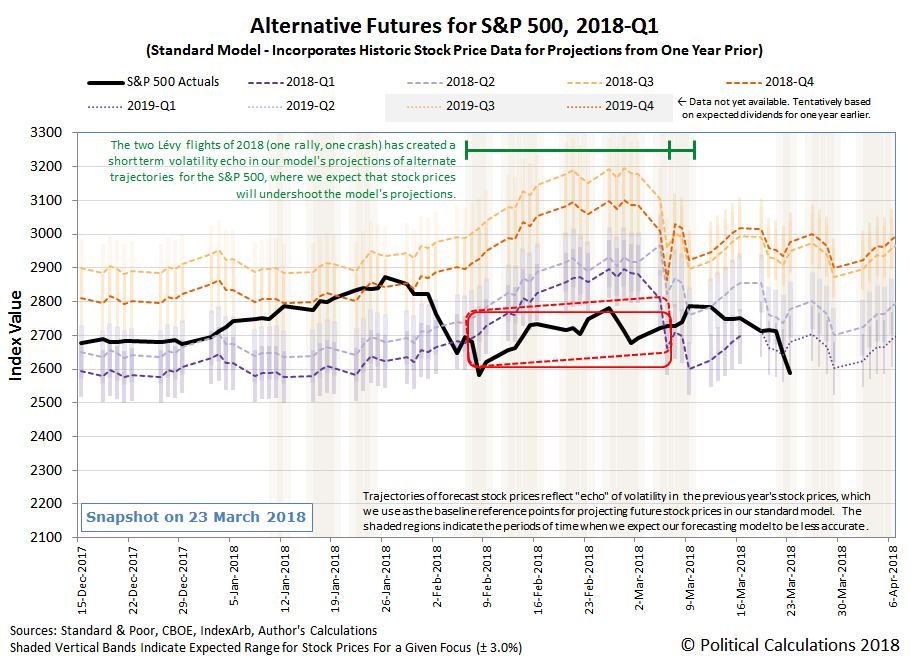 That transition marked, by our count, the fourth complete Lévy flight event for the U.S. stock market in 2018, which occur whenever investors shift their forward-looking focus from one distinct point of time in the future toward another, where differences in the change of the rate of growth of dividends per share expected at the different points of time are large enough to drive larger changes in stock prices than would be expected if they genuinely followed a "normal" random walk (they don't!) Here's our tally of the Lévy flight events that we've observed since 2018 began:

After 19 March 2018, we find that the trajectory of the S&P 500 has largely remained consistent with our dividend futures-based model's projection for stock prices that assumes that investors are predominantly focused on 2019-Q1 and the expectations associated with that point of time in the distant future as they make their current day investment decisions.

At least, through Thursday, 22 March 2018. On Friday, 23 March 2018, something remarkable happened to the S&P 500, where we can directly trace the impact of new information related to a trade war-related headline in prompting outsized noise event for the U.S. stock market. The following chart shows the trajectory of the S&P 500 on that day:

Here, we see that the S&P 500 showed typical levels of volatility, with stock prices hovering within about a half of a percent of its previous day's closing value of $2,643.60.

We've repeatedly observed that it takes investors approximately two to four minutes after unexpected news breaks for their response to that news to begin affecting stock prices. Since the S&P 500 began to break sharply downward after 2:42 PM Eastern time, that would put the beginning of the specific news event to which investors responded somewhere between 2:38 PM and 2:40 PM.

That event appears to be the wide publication of an Associated Press article that hit the nation's news wires within that very narrow window of time:

Doing some quick math, China's threatened tariffs on $3 billion worth of selected U.S. goods were sufficient to reduce the S&P 500's estimated market capitalization by more than $393 billion.

That's quite the scare multiple! At the very least, investors have sent a very loud and expensive message to both Washington D.C. and Beijing that a trade war is a lose-lose proposition.

And though the rest of the week's news headlines didn't have that kind of market-moving power, here they are, as we noted them. 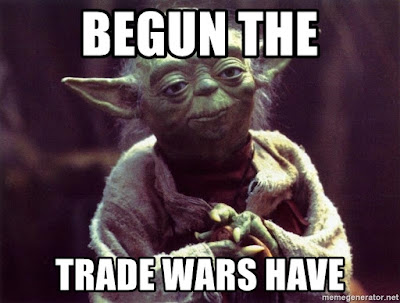 Elsewhere, Barry Ritholtz found that the week's positives outweighed the negatives for the U.S. economy and markets during the third full week of March 2018.

As we wrap up our summary of what happened for the S&P 500 in Week 3 of March 2018, we may very well have a new, negative noise event for investors to factor into their geopolitical calculations. Oil prices may be something very worthwhile to pay close attention to in this fourth and final week of March 2018.