Although the media reports that they spend much of their free time killing things, two-thirds of millennials appear to be unable to fully capitalize on their natural killer instincts enough to take on the risks of investing in the stock market to increase their wealth outside of having a job. 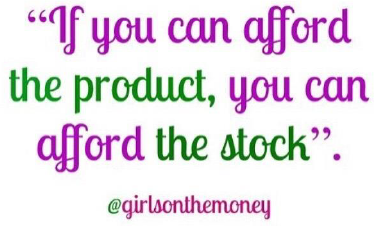 Whether that's because their parents failed to teach them to invest or because they find it too "scary and intimidating", it seems strange that so many Americans of the millennial generation haven't grasped that investing can be as easy as buying the products that you want to have and isn't much more expensive than that. In fact, to quote Girl$ On The Money's Mabel Nuñez from her presentation (HT: J. Money) at the LOLA Retreat money event for women that was held in New York City last month, "if you can afford the product, you can afford the stock".

But, if you're only a customer of what the company sells, you're missing out on the opportunity to make money from the company's success in providing the kinds of products and services that you and lots of other people like you are happy to buy at the prices at which they sell them. One way you can do that is to buy shares in the ownership of the companies whose products that you like to buy, which is what you're really getting when you invest your money in those companies' stocks. The stock market is simply the place where you can publicly buy, sell or trade those shares of ownership.

Let's say that you like to buy a particular retailer's apparel products. These kinds of businesses will be grouped in the stock market's Services sector, where you can find them listed under Apparel Stores.

We've gone ahead and pulled the list for the Apparel Stores whose shares of stock are available to be bought in the stock market, where we've focused on those company's who pay a dividend to the owners of the shares of stock that they have issued.

Now, let's put Mabel Nuñez' proposition to the test. Let's say that you happily paid $120 for shoes from Foot Locker (NYSE: FL), where you believe you got a good deal on them.

A single share of stock in Foot Locker cost $43.44 at the close of trading on Monday, 14 May 2018, so there's no doubt that if you could afford to have paid $120 for a pair of shoes, you probably wouldn't have had any trouble in buying a single share of stock in the company. In fact, you could have bought two shares and had change left over, even after paying any commissions or fees to a broker, which is what they call the salespeople of the stock market.

We focused on the dividend paying stocks among the apparel stores for a reason, which is because they provide an opportunity to get a fraction of the profits that the company earns and doesn't reinvest back into the business thanks to your ownership of it. In this example, that would mean that you would get $1.38 every year for every share of Foot Locker stock that you own.

This is where it gets interesting. What if you had the money to buy 100 shares of stock in Foot Locker? While those 100 shares would have cost you $4,344, they would also give you $138 that could pay for the $120 pair of shoes you liked so much in the first place, so not only could you get the shoes, you would have up to $18 left over. And you could potentially do that every year....

At this point, we should caution that increasing stock prices and dividends over time are not a guaranteed result, where companies that run into financial troubles will sometimes cut their dividends and will see their shares decline in value, which is a risk that comes along with being an owner. It is no different for people who own their own businesses, no matter how big or small that they might be - the value of their business and the income they have left over after paying all their bills and reinvesting in the business is what determines how much they get paid.

That risk can be minimized by diversifying the stocks you own, so that not all your investing eggs are in one basket, and also by periodically selling stocks that are facing such troubles and replacing them with the stocks of companies that have stronger businesses or growth prospects. Companies that are selling the kinds of goods and services that people like you are willing to buy at prices that you believe are a good deal.

Since we're just focusing on individual companies, we'll stop there for now, but there is so much more to investing. On the whole, it's a lot less scary and intimidating than many millennials would appear inclined to believe!