Political Calculations
Unexpectedly Intriguing!
June 12, 2018
Either GE Or Its Dividend, and Possibly Both, Are Set to Shrink

On Friday, 8 June 2018, General Electric (NYSE: GE) took a pass on cutting its dividend, as the company declared that it would sustain its current quarterly cash payouts to the company's shareholders at its current level of 12 cents per share.

In taking that action, GE's CEO John Flannery surprised the market by not taking the opportunity of cutting the company's dividends now, after having primed investors to expect such a move last month.

Not that investors aren't still expecting GE to cut its dividend. Although they breathed a sigh of relief and boosted GE's share price by 1% above its previous day's close at $13.93 per share, GE's market capitalization of $121 billion is consistent with investors still anticipating a 20-25% dividend cut in the future. 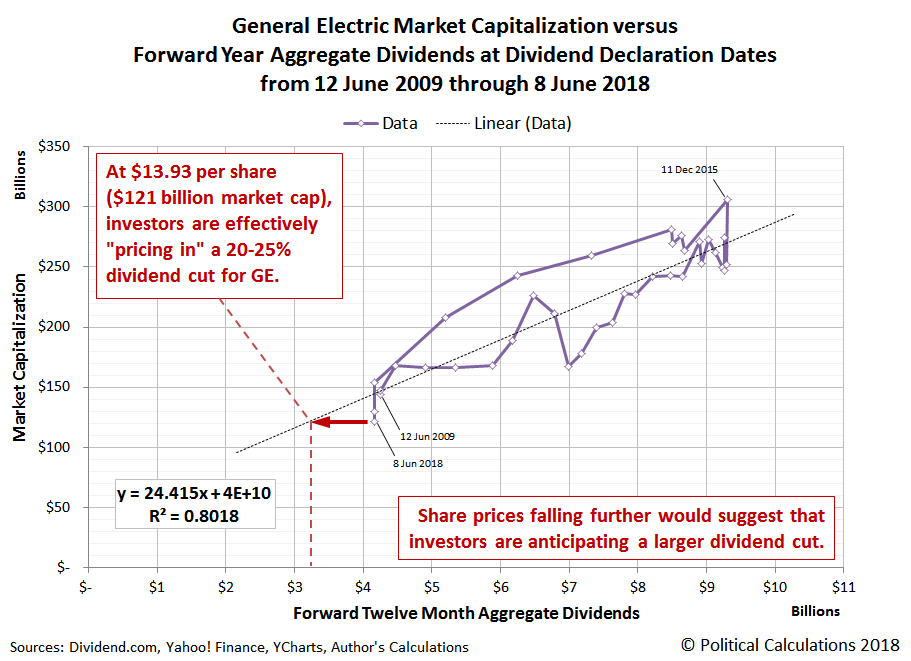 Alternatively, the chart above suggests that if GE can avoid cutting its dividend, its stock price is likely to rise from its current level.

That GE is still likely to cut its dividend in the future is underscored by recent bearish analysis by JP Morgan Stephen Tusa, who argues that "the bottom line is that we see the need to de-risk substantially, which includes the need for cash and a cut to the dividend to help with operational de-levering." Overall, Tusa sees GE needing some $30 billion in cash to pay down its corporate debt to more sustainable levels to avoid having its corporate credit rating cut.

If GE were to eliminate its dividend entirely, it would free up some $4 billion in cash annually to meet that need, where GE would have to continue selling off its assets to reduce its liabilities by the full $30 billion target identified by Tusa. Selling its stake in oilfield services firm Baker Hughes could raise $25 billion, where the remainder could be accomplished by the sales of other, smaller assets that the company is already in the process of selling.

No matter what, General Electric is set to become a very different, and smaller, company from what it has been. Either GE or its dividend, and quite possibly both, are still set to continue shrinking.