Political Calculations
Unexpectedly Intriguing!
July 18, 2018
The National Dividend Through May 2018

How well are typical American households faring through this point of time in 2018?

To answer that question, we're going to turn to a unique measure of the well-being of a nation's people called the "national dividend". The national dividend is an alternative way to measure of the economic well being of a nation's people that is primarily based upon the value of the things that they choose to consume in their households, which makes it very different and, by some accounts, a much more effective measure of their state than the more common measures that focus upon income or expenditures that apply at all levels of the economy, such as GDP, which have proved themselves to not be well suited for the task of assessing the economic welfare of the people themselves.

To get around that problem, we've developed the national dividend concept that was originally conceived by Irving Fisher back in 1906, but which fell by the wayside in the years that followed because of the difficulty in collecting the household consumption data needed to make the analysis possible. It wasn't until we got involved in 2015 that anybody thought it might even be possible to develop with the kind of data that has become available in recent decades, where we've been working to make the national dividend measure of economic well-being into a reality.

With that introduction now out of the way, let's update the U.S.' national dividend through the end of May 2018 following our previous snapshot that was taken for data available through September 2017. 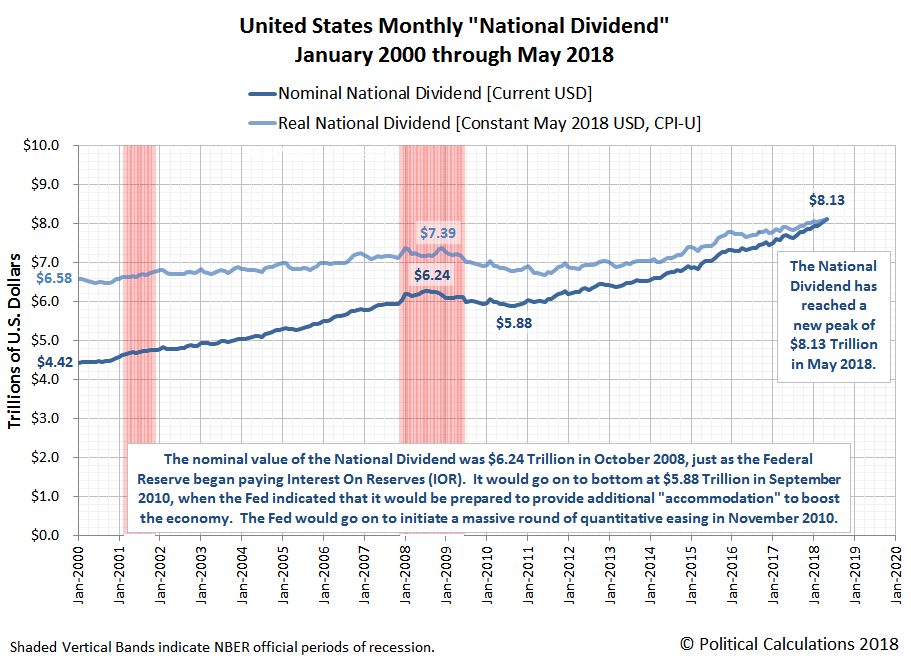 Through May 2018, the national dividend continues to indicate that America's households are enjoying a robust improvement in their overall economic welfare, having grown from a preliminary estimate of $7.63 trillion (or a revised $7.78 trillion) in September 2017 to a new high of $8.13 trillion through May 2018.

This is the first update that we've had since December 2017, where we've largely kept this analytical series on the back burner following Sentier Research's suspension of its monthly household income estimates data series from May 2017 to March 2018. With Sentier Research having resumed presenting their data series, we hope to present the national dividend on a more frequent basis.

We've incorporated the U.S. Census Bureau's April 2018 update to the estimated number of households in the U.S. in today's analysis, which covers data through March 2018. We're using projections of the number of households for April and May 2018, which we've based on recent historic trends, where we will subsequently revise this data as Census estimates become available.

If you look closer at the history of our chart, you'll see the very real impact to American households of the most inappropriately contractionary monetary policy that the Federal Reserve ever implemented outside of the Great Depression. If you want to find out more about that event, check out this very timely article at Forbes....