The following Sankey diagram visualizes the answers those questions in percentage terms for the average business operating in the United States, where all the indicated values are given as a percentage of total business revenue. 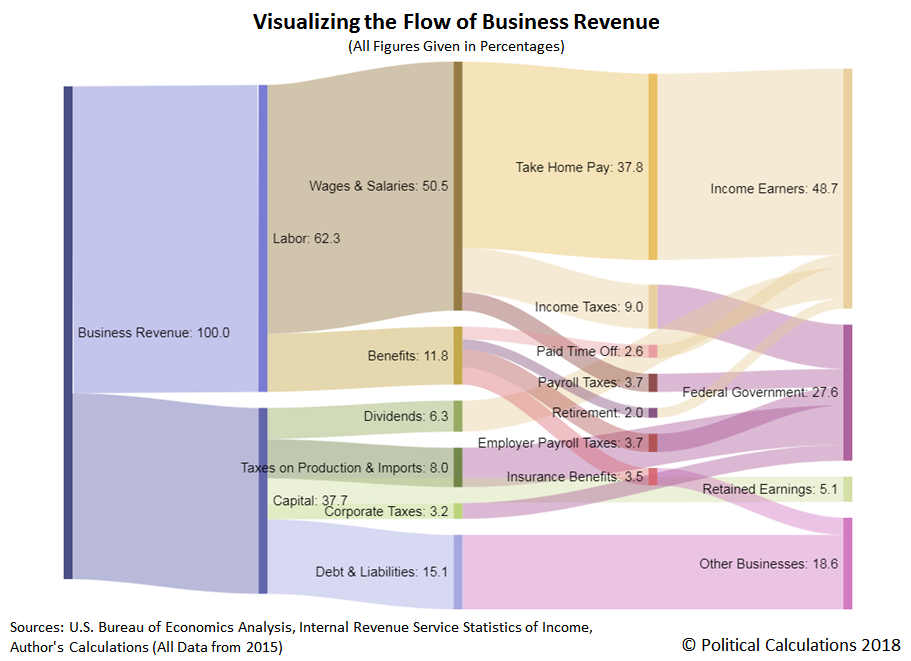 In the chart, where taxes are concerned, we're focusing on money that goes to the national U.S. government through federal withholding income taxes and payroll taxes, or that are directly paid to the federal government by U.S. businesses, where we're not considering either state-level taxes or local taxes. Consequently, the amount of money that goes to people who actually earn incomes is less than indicated.

That said, here are the answers to the four questions we asked at the beginning:

An important thing to keep in mind in considering these percentages is that they're based on figures that were captured for the entire U.S. economy. As such, the average flow they indicate will be skewed, much the same way that the average annual income of a line of 10 people queued up at a Starbucks would be if Amazon's Jeff Bezos was standing in it.

As an example of that effect, consider that the median income earner probably isn't taking home 6.3% of business revenue in the form of dividends. Much of that money is really going to business owners who choose to take their incomes in the form of dividends rather than as salaries, and also to investors, which includes a large number of former wage and salary earners who seek dividend income to support their retirement.

The chart also illustrates how the federal government taps into business revenues at multiple points to fund itself, which independently don't seem like they claim very high percentages, but when combined, reveals that it takes a larger share of business revenue than stays with businesses in the private sector.

For our part, this was an interesting exercise in data visualization, where the chart above is little more than a first cut at telling a bigger story. We'll be curious to see how others might model these kinds of flows.