If you consider at a long enough history of the North American West, you'll find that its story is one that is punctuated by severe, prolonged periods of drought.

By a "long enough history", we're referring to the thousands of years before the existence of the Americas was known to anyone outside of the Americas, where new research indicates that large regions of what is now part of the United States experienced multiple, decades-long droughts. 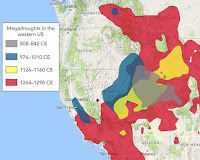 In the August issue of Physics Today, climate scientists Toby Ault and Scott St. George share a pair of startling research findings. Between roughly 800 and 1500 CE, the American West suffered a succession of decades-long droughts, much longer than anything we’ve endured in modern history. And statistical models suggest that, as the climate warms, such megadroughts are increasingly likely to return.

How can scientists be so sure about the duration and extent of droughts that happened long before the era of instrument-based precipitation records? As Ault and St. George explain, the annual growth rings of ancient trees contain a rich paleoclimatic record of precipitation and soil moisture patterns. The width of a tree ring gives clues as to how well nourished the tree was in a given year. The map shows four western US megadroughts predicted from tree-ring data.

The interesting part of their work came when the authors ran into a roadblock in using General Circulation Model (GCM) simulations to determine how the periods of North American megadroughts that are encoded in the historical record via tree rings, underwater tree stumps, archaeological artifacts and cores taken from sand dunes began, where they turned to mathematical modeling using empirical data to gain more insight into these events.

Unfortunately, the usual tools for unraveling the origins of megadrought have significant limitations. The history of megadrought in the western US represents just one realization of a vastly complex and chaotic system. We don’t have alternative histories to compare it with. GCM simulations afford us the flexibility to test different forcing scenarios, but they have shortcomings. Although some transient climate simulations produced by GCMs can now simulate more than a thousand years of climate evolution, that’s still too short to produce a statistically meaningful sample of megadroughts. Furthermore, many state-of-the-art GCMs still struggle to correctly simulate variability in the tropical Pacific Ocean, whose El Niño–Southern Oscillation exerts a strong influence on western drought.

Recently the two of us and several of our colleagues tried to work around those obstacles by using a statistical model to test whether megadroughts can occur in the western US simply by chance. Our strictly empirical model had only two inputs: soil moisture estimates based on observational records of temperature, precipitation, and other relevant variables; and ocean surface temperatures from instrumental measurements. It did not directly include any information from tree rings or other natural drought indicators.

We “trained” the model using data from the last half of the 20th century, which meant it did not include the influence of big eruptions, solar changes, and other climate forcings from more than a few decades ago. We also removed any trends that were potentially related to global warming. Because the model was simple and computationally efficient, we could produce thousands of simulations, each of which described month-by-month changes in the drought severity index across the American West with about 100 km spatial resolution over a period of 1000 simulated years.

Had our simulations produced no megadroughts, we would have concluded that those events are possible only when Earth’s climate undergoes a lasting and dramatic change. As shown in figure 3, however, our model produced simulated megadroughts that looked very much like the real thing. They were just as long, widespread, and severe as the worst event inferred from tree rings. The finding implies that megadroughts can occur in the western US even in a 20th-century-like climate—it would be merely a matter of time.

Since it overlaps much of the data that influenced Ault and St. George's study, we can get a sense of what the cost of a megadrought might be from the National Oceanic and Atmospheric Administration (NOAA) data on major weather-related economic losses, which lists 25 major drought events within the United States since 1980 where the annual estimated losses exceeded $1 billion. Altogether, these large droughts totaled an accumulated economic loss of $157.3 billion in unadjusted U.S. dollars. The NOAA indicates that the inflation-adjusted loss totaled $241 billion in terms of 2018 U.S. dollars.

During this period, the years from 2011 through 2014 represent an event that would qualify as a megadrought in terms of its scope, spanning numerous western states, and its severity. During this period of time, cumulative economic losses exceeded $56.4 billion, or about $62.4 billion in 2018 dollars, which works out to be a little over a quarter of all the annual billion dollar-plus inflation-adjusted economic losses attributed to the drought conditions that have been recorded since 1980. The following four animated maps depict the evolution of that drought over the years from 2011 through 2014.

As you might imagine, the agricultural sector of the U.S. economy bore the greatest brunt of these losses, accounting for anywhere from 55% to 75% of all the drought-related economic losses from 2011 through 2014. The following map helps illustrate where those accumulated nominal losses were the greatest during this period, which depending upon the size of the state's economy, could represent several percentage points of its GDP.

This period is also interesting in that farmers and ranchers who were negatively impacted by the widespread drought conditions during this period did not receive any financial relief from the U.S. government to cover their losses in the period from 1 October 2011 through 14 April 2014, because of the expiration of disaster relief provisions in the 2008 Farm Bill, where a new farm bill wasn't signed into law until 7 February 2014 because of budget debates between President Obama and the U.S. Congress in Washington D.C. Consequently, economic losses during these years were unnecessarily elevated over what they might otherwise have been, where the retroactive financial relief provided by the 2014 Farm Bill came too late to avoid the full magnitude of the losses that were incurred.

In that political sense, the United States and numerous other nations around the world still share something in common with the Roman Empire, where the fate of its political leaders often depended upon the amount of rainfall that ancient farms received.