Political Calculations
Unexpectedly Intriguing!
October 3, 2018
Dividends by the Numbers for September 2018 and 2018-Q3

September is typically the worst month of the year for tracking positive changes for dividends in the U.S. stock market. While the month of June can provide it with real competition, in most years, September ranks the lowest for the number of announced dividend increases.

Having now set the stage for what you're about to see, the following chart illustrates the number of dividend increases and decreases that have been declared in each month from January 2004 through September 2018. 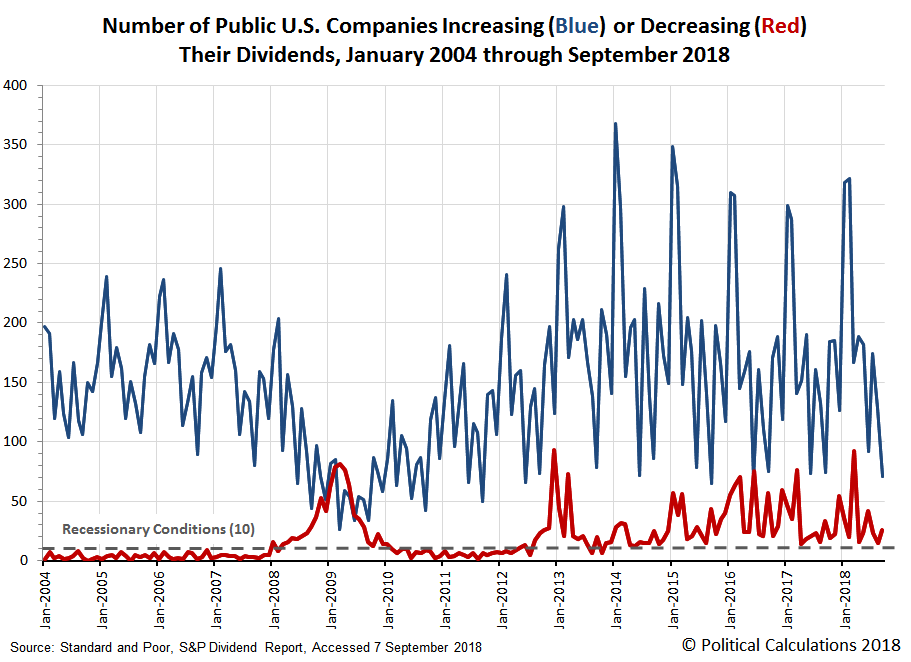 With the end of the third quarter of 2018, we suspect that Standard and Poor's report on September 2018's dividend cuts is double-counting a number of previously announced dividend cuts, because the reported figure of 26 cuts is much higher than the number of ordinary dividend cuts that we identified from our near real-time sources of dividend declarations, similar to what we observed for June 2018. We reached out to S&P's Howard Silverblatt, who provided a listing of recently recorded dividend cuts, which appears to confirm that is the case.

The following chart reveals that our sampled number of dividend cuts in 2018-Q3 is both much lower than what we sampled in the year-ago quarter of 2017-Q3 and also that for the first time in a very long time, the number of dividend cuts recorded among our sampling fell into the range that indicates the U.S. economy is not experiencing recessionary conditions. 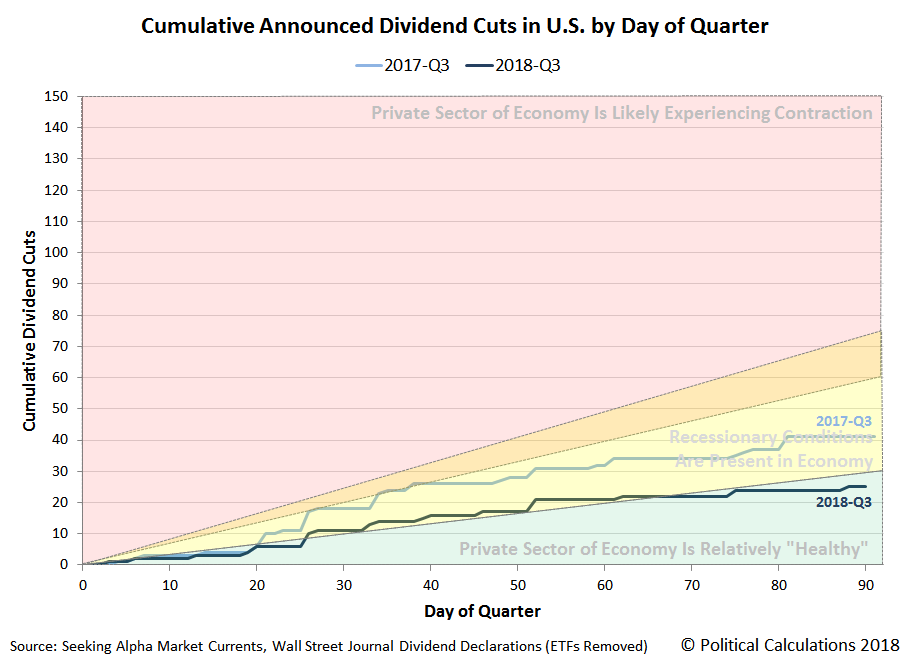 Here's the full listing of all 25 dividend cuts for ordinary U.S. stocks that we were able to independently verify through sampling our two main sources of dividend declarations during 2018-Q3. Only three of these dividend reductions were recorded during September 2018.

Compared to last month, we've shortened the list by one firm because we were able to confirm that a reduced dividend announced for Pentair (NYSE: PNR) was not a true dividend cut. Here, the company's spinoff of its electrical division into a separate entity, nVent Electric (NYSE: NVT), which also pays a dividend, was picked up as a dividend cut by the automated systems that generate the reports we track in real-time. The combined value of both companies' dividend payouts however appears to align with what Pentair paid its shareholders prior to the spinoff, where Pentair shareholders who now also own shares of nVent Electric as a result of the spinoff appear to have not seen a reduction in their quarterly dividend income.

Meanwhile, the duplicated appearance of Sabine Royalty Trust (NYSE: SBR) is not an accident. The oil royalty trust pays out dividends as a fixed percentage of its variable earnings on a monthly basis, where it reduced its payment in both of the two consecutive months of July and August 2018. That it didn't make the list a third time suggests that it very likely boosted its monthly dividend payout in September 2018.

From time to time, we like to promote the work of other bloggers who generate thought-provoking content, where today we're going to feature a video produced by the Dividend Guy, who converted an earlier article on the topic of dividend cuts in disguise.

While Mike is focusing on the issue of inflation eroding the inflation-adjusted value of dividends, which mainly affects those counting on dividend income in retirement, we would add that there's another, more serious situation that also needs to be considered by all investors when companies keep their dividend per share payouts steady over time.

That more serious situation arises when these companies engage in share buybacks, which also work to disguise dividend cuts. In this case, they are reducing their total aggregate dividend payouts to their shareholding owners, even though they are not reducing their dividends per share, which helps preserve their share prices. While there may sometimes be some tax avoidance strategy behind this kind of move that can benefit shareholders, more often than not, this kind of strategy is employed to preserve cash at a firm that is running into growth problems.

To tell which scenario applies, check the trend for the company's total cash flow - if it's growing, then the steady dividend policy combined with share buybacks are likely a tax-based move that benefits at least some shareholders without necessarily harming the interests of others. If its cash flow isn't growing, then start looking for problems with the company's business or its future growth prospects, because there will almost certainly be trouble brewing.