But now, millennials, or rather, that generation of people born in the years from 1981 through 1996, would appear to have turned their mindlessly destructive attention toward a new target: the Thankgiving turkey.

Small birds are having a big moment.

Tiny turkeys will increasingly grace Thanksgiving tables next week, thanks to the millennial generation's ongoing campaign to remake American gastronomy. The holiday depicted by Norman Rockwell—Grandma showing off a cooked bird so plump it weighs down a banquet plate—is still common. But smaller families, growing guilt over wasteful leftovers and a preference for free-range fowl have all played roles in the emergence of petite poultry as a holiday dinner centerpiece....

There are signs that wee birds are in greater demand. Inventories of whole hens, which are smaller than males, are down 8.3 percent from a year ago, the latest U.S. Department of Agriculture data show. Whole toms, the males, are up 6.9 percent.

Don’t call them capons. They're not castrated chickens. Nor are they chicks. They're not babies. They're just turkeys that weigh in the neighborhood of six pounds.

That's considerably smaller than the weight of adult turkeys commonly found in the American wild.

Are millennials such complete hipster douchebags that they would promote a radical selective breeding/genetic modification program for little more than what amounts to a personal fashion statement for the one day they might serve up their version of a traditional Thanksgiving dinner? And if so, how successful have they been at imposing their will upon the nation's turkey producers and all other Americans?

To find out the answer to that second question (the first was rhetorical), we turned to the U.S. Department of Agriculture's report on the total live weight of all turkeys produced in the U.S., where the following chart presents the annual totals for each year from 1970 through the preliminary estimate for 2018. 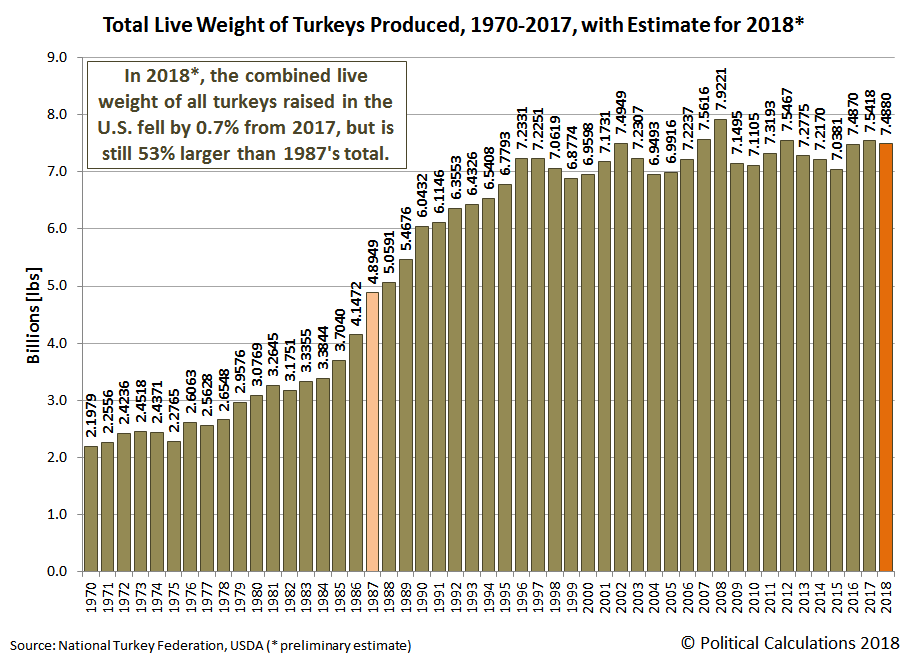 We see in this chart that the answer is "maybe", where the total aggregate live weight of all turkeys produced in the U.S. declined by 0.7% from their 2017 level to a preliminary estimate of 7.488 billion pounds in 2018. 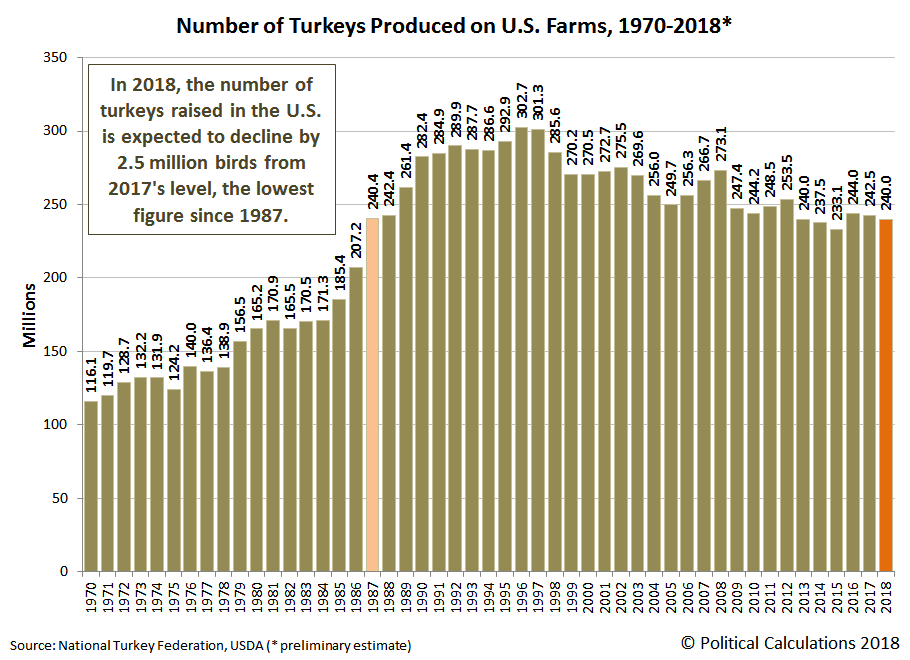 Here, we find that the number of turkeys raised in the U.S. has declined by 2.5 million year-over-year, where the preliminary estimate of the population of turkeys in the U.s. has fallen to 240 million, the lowest level recorded since 1987 outside of the period of the bird flu epidemic of 2014-2015 that whacked the farm-raised population of turkeys.

By itself, this decline suggests that turkeys are becoming less popular with Americans, where Millennials would perhaps be the likely culprits, but when taken with the data for the total aggregate live weight of turkeys produced in the U.S., it allows us to determine the average live weight of the American farm-raised turkey. 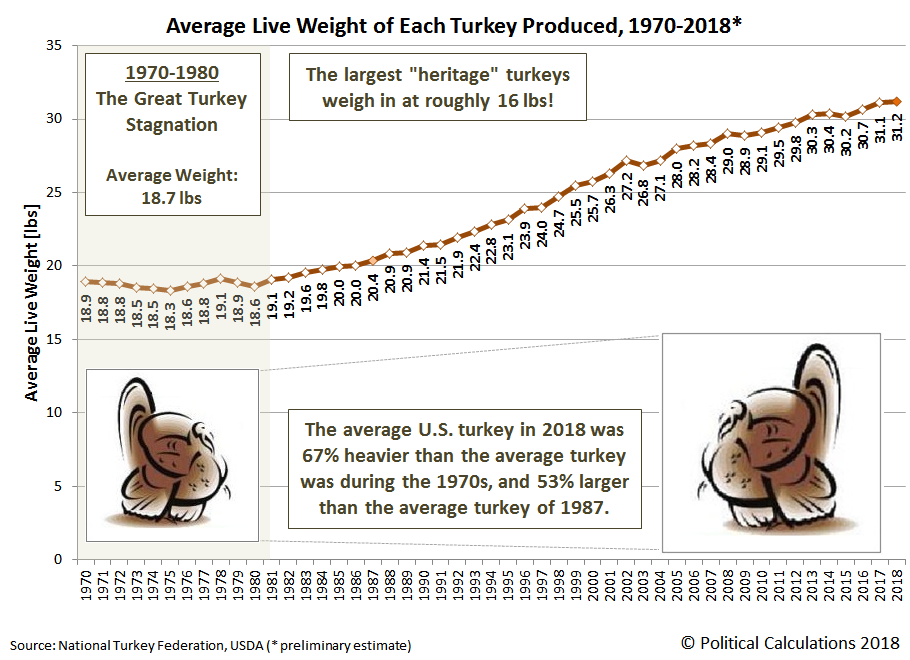 The comprehensive evidence indicates that Millennials are so-far failing to kill the Thanksgiving turkey. Going back to the Bloomberg article announcing the apparent Millennial desire for tiny turkeys, Scott Sechler, one of the breeders seeking to produce a sufficiently meaty small bird for the Millennial market, explained why that impact to the purchase weight of Ready-To-Cook turkeys now available for sale at your local grocery store has been so immeasurably small:

Still, 12- to 14-pound turkeys remain the biggest holiday seller, Sechler said. That may be because some millennials are "still going to Mom's," he said.

So says the man whose future livelihood depends upon his keeping an accurate pulse of this particular target demographic.