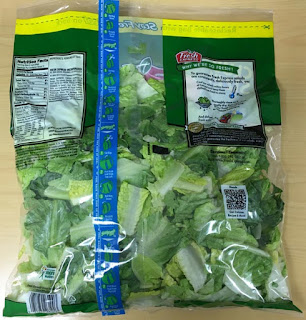 For American salad lovers, the U.S. Food and Drug Adminstration's warning on the eve of Thanksgiving for all consumers to throw out all their romaine lettuce, less they risk becoming infected with a dangerous strain of Escherichia coli (E. coli) bacteria that had sickened several dozen people in several U.S. states and Canada in October and early November, was bad news.

What made it scary news however is that other than having been traced to romaine lettuce, the FDA had no idea where this latest E. coli contamination event had originated. And with that being the case, all romaine lettuce from all sources was suspect. Because it couldn't isolate the source, the FDA chose to respond to the outbreak by commanding Americans to effectively throw the baby out with the bathwater in the name of safety.

Because the Yuma, Arizona growing region supplies approximately 82% of all the nation's lettuce consumed in the period from late-November to early-March each year, the FDA's precautionary warning proved to be a very wasteful event, since none of the romaine lettuce that was harvested in this region was contaminated with the Shiga toxin-producing O157:H7 E. coli strain.

From both the consumer's and the grower's perspectives, it would have been much better if the FDA could have narrowed its focus much faster than it achieved with its current arsenal of technological resources.

Believe it or not, the technology behind Bitcoin may provide a much more effective and efficient means of tracing outbreaks back to their sources.

Blockchain makes a supply chain more transparent at an all-new level. It also empowers the entire chain to be more responsive to any food safety disasters. Massive organizations such as Nestlé and Unilever are considering blockchain technologies for that reason.

Walmart, which sells 20 per cent of all food in the U.S., has just completed two blockchain pilot projects. Prior to using blockchain, Walmart conducted a traceback test on mangoes in one of its stores. It took six days, 18 hours, and 26 minutes to trace mangoes back to its original farm.

By using blockchain, Walmart can provide all the information the consumer wants in 2.2 seconds. During an outbreak of disease or contamination, six days is an eternity. A company can save lives by using blockchain technologies.

Blockchain also allows specific products to be traced at any given time, which would help to reduce food waste. For instance, contaminated products can be traced easily and quickly, while safe foods would remain on the shelves and not be sent to landfills.

Going from six-to-seven days of uncertainty in tracing the origin of an E. coli outbreak to 2.2 seconds would represent a major gain to all American consumers, food producers, distributors, and grocers.

Bitcoin may be a bust, but the decentalized ledger accounting made possible by blockchain technology has potential for practical use in the real world. The romaine lettuce scare of Thanksgiving 2018 demonstrates the need - how long might it now take for a viable blockchain solution to be developed and implemented?