In recent years, U.S. exports have typically peaked in the months of October through December because these months coincide with the harvesting of the U.S. soybean crop, which has become the nation's single largest export product to China.

But not in 2018, because of the retaliatory tariffs that China's government has placed upon U.S.-grown soybeans as part of its trade war strategy with the U.S., which have led China's soybean buyers to effectively boycott the 2018 crop. The following chart shows the dramatic plunge in the year-over-year rate of growth in the value of U.S. exports to China that is a direct consequence of China's trade war strategy. 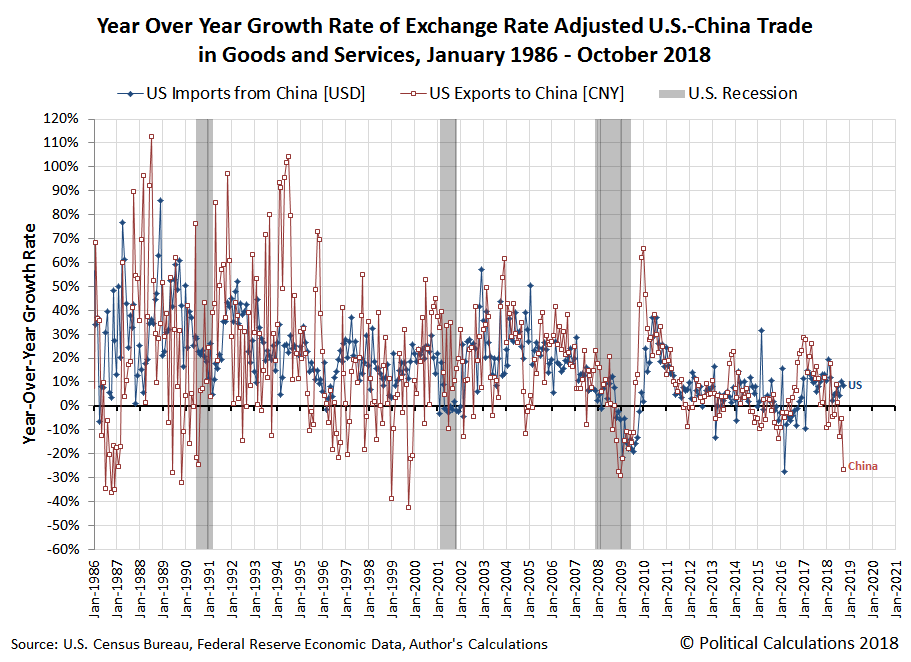 In the absence of the trade war, such a plunge into negative growth territory would be a clear indication that China's economy is experiencing deep recessionary conditions. China's economy is indeed decelerating and appears to be facing a growing threat of deflation that would be consistent with some degree of contraction occurring within the country's economy, but we believe the negative impact indicated in the chart is being exaggerated by the impact of China's tariffs on U.S. goods.

Perhaps a better question to ask is why don't we see a similar phenomenon develop in response to the tariffs imposed by the U.S. on the goods that China exports to the United States? The chart above confirms that the rate of growth of value of goods that the U.S. is importing from China is positive, which suggests that U.S. tariffs are having very little impact on U.S. demand for goods produced in China.

The answer to that question has a great deal to do with the strategy the U.S. has pursued in selectively imposing tariffs on Chinese goods. Benedikt Zoller-Rydzek and Gabriel Felbermayr of the European Netork for Economic and Fiscal Policy Research (econPOL) have analyzed the U.S. government's tariff strategy and found a strong explanation for the apparent lack of impact (emphasis ours):

On September 24th 2018, the United States introduced import tariffs on a wide range of Chinese products. The tariffs will affect US imports from China with a value that exceeds USD 250 billion - around 50% of all imports. In this analysis we show that, contrary to public opinion, the greatest share of the tariff burden falls not on American consumers or firms, but on Chinese exporters. We calibrate a simple economic model and find that a 25 percentage point increase in tariffs raises US consumer prices on all affected Chinese products by only 4.5% on average, while the producer price of Chinese firms declines by 20.5%. The US government has strategically levied import duties on goods with high import elasticities, which transfers a great share of the tariff burden on to Chinese exporters.

Altogether, these estimates suggest that Chinese firms are paying for about 75% of the additional cost that the U.S. government's tariffs have added on top of the cost of Chinese produced goods, insulating U.S. consumers from paying the full cost of the U.S.-imposed tariffs. That additional cost is then contributing to the increased level of economic distress that has gained ground in China's economy throughout much of 2018.

That is why the 90-day truce on new tariffs negotiated between China Premier Xi and U.S. President Trump, shaky though it may be, is still a big deal. Since the deal, China's government has indicated it would allow the following steps to be taken:

We'll have more to say on that last story in the very near future, where we think that the story is being driven in part by the backfiring of one aspect of the Chinese government's trade war strategy.

We'll close with an update to our chart showing the overall impact of the U.S.-China trade war to date to the overall level of goods and services traded between the two nations. Through October 2018, the gap between the pre-trade war trend and the trailing twelve month average of the value of goods exchanged between the U.S. and China has widened to $1.6 billion, which has primarily been driven by China's effective boycott of U.S.-grown soybeans.