The third week of January 2019 saw the S&P 500 (Index: SPX) rise sharply, buoyed by the capitulation of the Fed's interest rate hike-loving hawks and the actions the Chinese government is taking to stimulate its economy.

The following chart shows the trajectory of the S&P 500 during the week that was.... 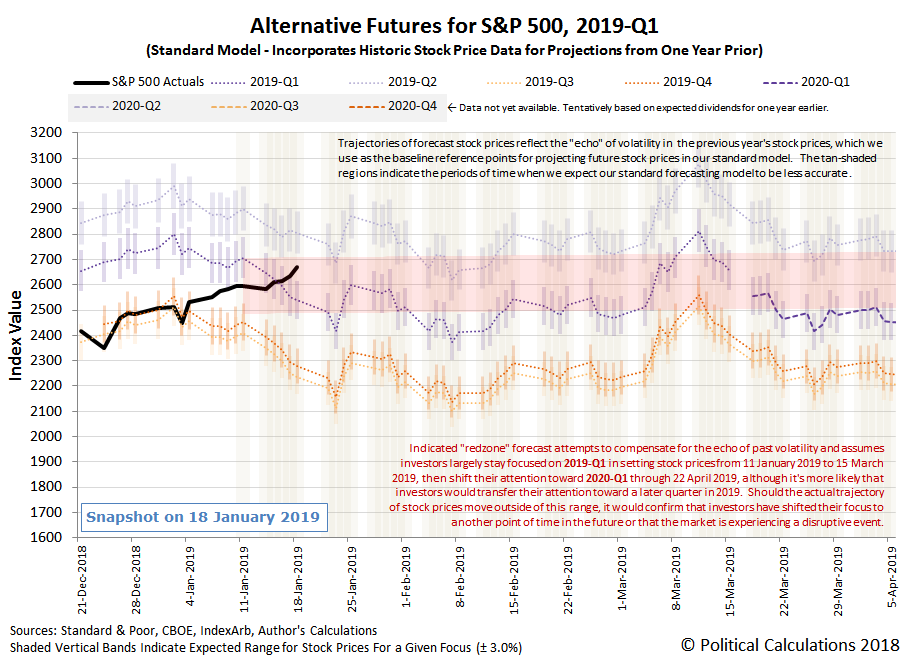 In Week 3 of January 2019, the S&P 500 generally tracked upward within the range indicated by the redzone forecast shown on the chart, which assumes that investors will largely maintain their forward-looking focus on the current quarter of 2019-Q1 through much of the quarter.

But what if that changes? We've already completed one Lévy flight event in 2019, which coincided with investors shifting their attention from the distant future quarters of 2019-Q3/Q4 back to the present quarter of 2019-Q1, so what would it mean if investors collectively refocus their attention toward a different point of time in the future and cause a new Lévy flight event to take place?

The dividend futures-based model we use to develop the alternate futures forecast chart gives us an idea of where the ceiling and the floor for the S&P 500 are at this time, assuming no major changes in expectations for future dividends in 2019 and no market-disrupting noise events.

What events could prompt investors to shift their forward-looking focus to any of these points of time? The list could be as long as your imagination, but news events regarding more Chinese government stimulus actions, a trade deal between the U.S. and China, upside surprises for future earnings, et cetera. The random onset of market-moving news events is what gives the stock market its quantum random walk characteristics.

Speaking of which, here are the bigger headlines that we noted for the trading week ending 18 January 2019, where next week's list should be shorter because of the market's closure for the Martin Luther King Day holiday.

Elsewhere, Barry Ritholtz identified the week's positives and negatives for markets and the economy.

Sharp-eyed readers will recognize that we've adjusted the range of the vertical scale on the alternate futures chart and that the redzone forecast, along with several of the other trajectories, has been angled upward with respect to last week's version. This change has occurred because there was a positive change in the S&P 500's quarterly dividends expected for 2019-Q2, which increased from $14.40 per share to $14.65 per share on 17 January 2019. Let's not forget that the level of stock prices are still primarily driven by basic fundamentals!