The near-real time sources that we track for dividend cut announcements is signaling that something wicked is happening within the U.S. oil and gas industry.

Setting the scene for context, the fourth quarter of 2018 ended with an ominous undertone in an otherwise positive year for dividend paying stocks in the United States:

By far and away, the oil and gas industry saw the greatest amount of distress during the fourth quarter of 2018, accounting for 63% of our sample and coinciding with a significant decline in oil prices during the quarter as global demand diminished. The financial sector, including Real Estate Investment Trusts (REITs), came in second with 17.4% of the dividend cuts in our sample, where the Fed's rate hikes negatively impacted eight of these interest rate-sensitive firms. Food producer and the manufacturing sector each recorded 2 dividend cutting firms each (manufacturing included the highly distressed GE), while the technology, mining, consumer goods and utility industries rounded out our sample with just one dividend cut recorded in each.

Now that January 2019 is nearly complete, we thought it might be worthwhile to check our two main sources for near-real time sample of dividend cut announcements to see how things are faring so far in the first quarter of 2019.

Compared to the first quarter of 2018, we find that the pace of dividend cut announcements is coming in above the level we recorded through the same point of time of the current quarter. 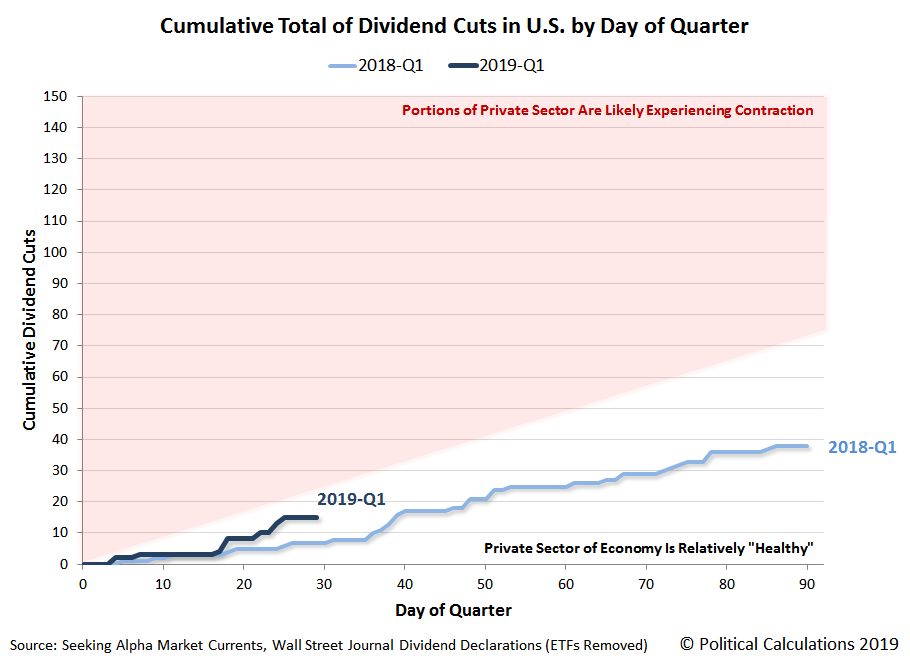 What really stands out in the underlying data however is that all of the firms in our sample that have declared dividend reductions in January 2019 are in the oil and gas sector of the U.S. economy. Here's the list of firms and links to their announcements.

This concentration of dividend cuts within the oil and gas industry is largely a result of an economic situation that has been developing in the global economy since late 2017, where several large economies have been experiencing a marked deceleration in economic growth, such as China and the Eurozone, which noticeably deepened in the last quarter of 2018.

Stimulated by tax cuts passed in late 2017, the U.S. economy was generally able to avoid a similar economic deterioration throughout much of 2018, but not entirely. The global economic deceleration has reduced the demand for oil and gas, which in turn, has lead to a steep decline in the price of U.S.-produced oil and gas products. Lower revenues have shrunk profits and cash flow in the industry, prompting the elevated level of dividend cuts we've seen in both the fourth quarter of 2018 and in January 2019.

Pointing to potential ripple effects from the intrusion of the global economy's distress into U.S. oil-producing states, the increased level of distress in the industry also helps explain something we've observed in state-level housing markets in the U.S., where the oil-producing states of Texas, North Dakota, and Louisiana have seen particularly sharp declines in existing home sales since September 2018, coinciding with the downturn in the health of the oil and gas industry in the last quarter of the year.

Do you suppose the Fed is taking these recent developments into consideration at its meeting today?

We'll follow up with our regular Dividends by the Numbers series when the data for the entire U.S. stock market sometime next week.

Update 1 February 2019: Expanding the list to include some late additions for the month....

Finally tally for our sample of dividend cutters for January 2019: 18 firms, 16 in the oil and gas sector, 1 in the finance sector, and 1 in consumer goods.