Political Calculations
Unexpectedly Intriguing!
March 18, 2019
The S&P 500 Survives Quadruple Witching, But What Next?

Now the big question becomes "how long might that last?" After all, the quadruple witching event on Friday, 15 March 2019 means that the dividend futures contracts for 2019-Q1 have now expired, which puts 2019-Q1 in the rear view mirror, at least as far as its dividend futures are concerned, which was the principal assumption behind the redzone forecast we added to our spaghetti forecast chart for the S&P 500 earlier this quarter. 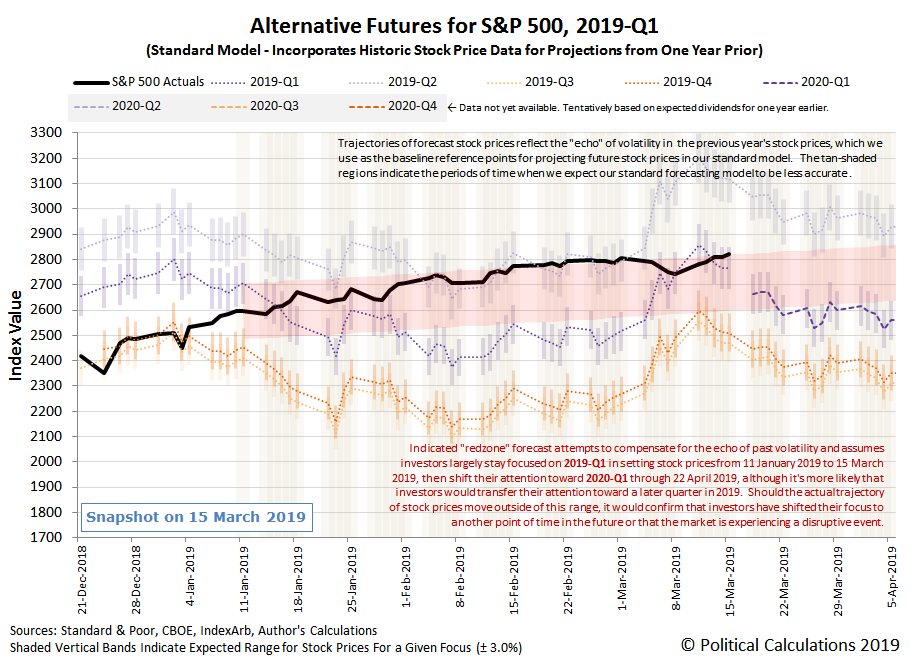 With the current level of the S&P 500 right at the upper edge of our redzone forecast, its current level is currently consistent with the last two of the four possibilities that we outlined in our last edition.

In that last scenario, through 15 March 2019, the level of the S&P 500 would suggest that investors are splitting their forward-looking attention between 2019-Q2 and 2019-Q3, with a slightly heavier weighting toward the more distant future quarter.

Remember, it wasn't long after the S&P 500 reached its all-time high closing value on 20 September 2018 that our dividend futures-based model indicated that investors suddenly began shifting their attention from 2019-Q1 toward 2019-Q3, forcing the market into the early stages of what would become a correction.

2019-Q3 has become relevant for investors once again because if the Fed might consider hiking interest rates during 2019, they will most likely do so during this future quarter according to a recent Reuters poll. Should investors have reason to more fully focus their attention on this future quarter, the S&P 500 would be in for a rougher ride, as we also outlined in our previous edition:

The Federal Reserve's Open Market Committee will meet later this week, where we will soon have a better idea of what they are thinking. In the meantime, let's catch up with the major market-moving market headlines since our last edition....

For the bigger picture, Barry Ritholtz identified 7 positives and 6 negatives in the news of the week that was!