Back in 2010, we introduced a new way to visualize how out of balance the U.S. government's spending had become with respect to the typical income earned by U.S. households.

To do that, we plotted the U.S. government's spending per household against median household income, but that wasn't all. We also estimated how high federal spending could be with respect to the household income measure to keep the government's budget in balance, which we featured as the "Zero Deficit Line".

Want to see how that looks with eight additional years of data? Here you go!... 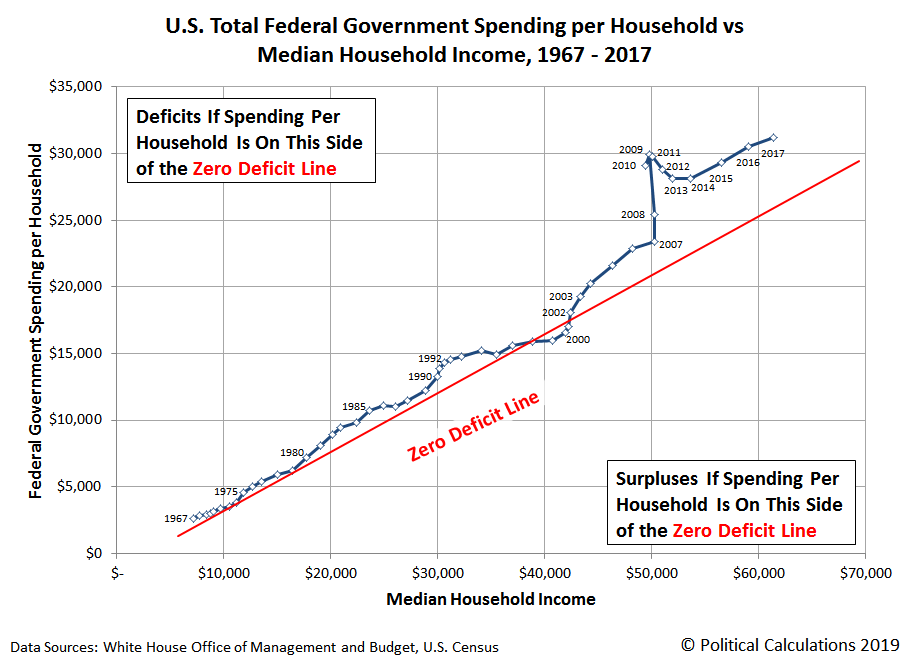 The chart now covers a five decade long period from 1967 through 2017, where we're not yet able to present the data for 2018 because the U.S. Census Bureau won't publish its estimate of household income and median household income for that year until September (to be fair, they just collected that data last month!)

Although not as bad as in 2009, the U.S. government's spending is still pretty far out of whack, holding well above the level the Zero Deficit Line indicates would be affordable for typical American households.

But we notice that the ZDL isn't necessarily capturing the full story, which we can see when we plot the same U.S. government spending per household and the government's tax revenues per household against Median Household Income. 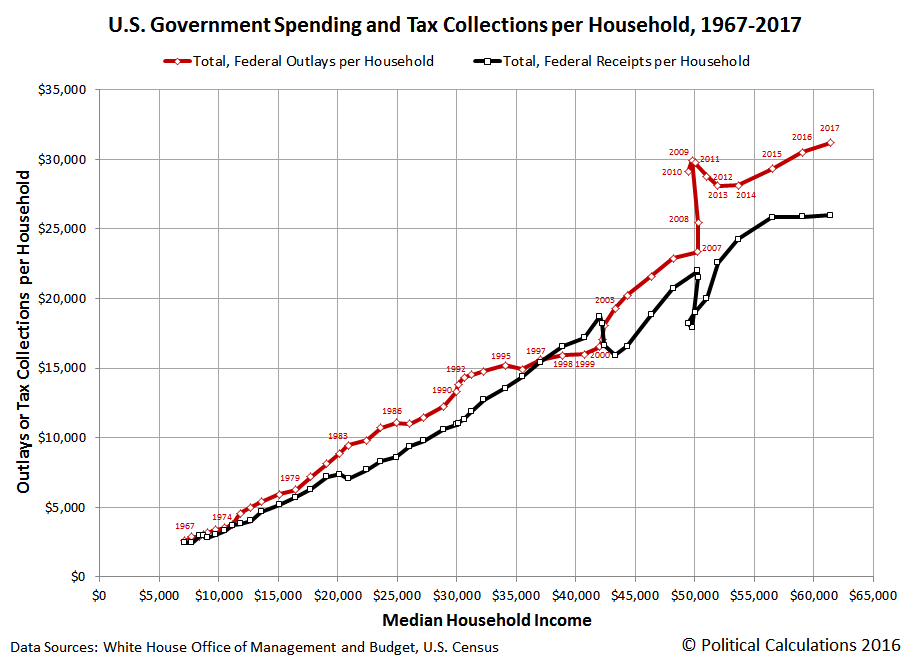 The difference between the Zero Deficit Line and U.S. government spending per household isn't capturing the full extent to which that spending exceeds the levels that would be affordable for American households because tax revenues have not kept pace with the ZDL since 2015. That's mainly because of what the New York Times described as the "most important least-noticed economic event of the decade", which coincidentally had also escaped the contemporary notice of the New York Times, which was very heavily invested in boosting their preferred successor to President Obama at the time, for whom that real economic distress would be a defeating distraction.

Two years later, they finally acknowledged it and called it an "invisible recession", or a mini-recession, but it really wasn't all that invisible at the time it was happening if you knew where to look for it. It was very good news when it was finally clear it was ending.

The bad news however is that the lagging effect of that event on tax revenues means that the gap between excessive spending and the Zero Deficit Line has grown wider than it indicates. When the data for U.S. households in 2018 becomes available later this year, we'll revisit the ZDL again.