Global financial markets experienced something of a "volatile shift" on Thursday, 23 May 2019, sending bond yields falling as the yield of the 10-Year Treasury dropped below the yield of the 3-Month Treasury as the inversion of the U.S. treasury yield curve suddenly expanded.

For the S&P 500 (Index: SPX), that shock prompted investors to once again draw in their focus from 2020-Q4 toward the nearer term futures of 2019-Q3 and Q4, where the prospects of a Federal Reserve rate cut in 2019 increased in response. The following chart from the CME Group's FedWatch Tool shows are now betting on future rate cuts happening sooner rather than later, which is a change in their forward-looking expectations since last week.

Meanwhile, our spaghetti forecast chart shows the impact for the S&P 500, where we now find the level of the index falling about halfway between the levels the dividend futures-based model on which it based indicates would apply if investors were either focused exclusively on 2020-Q4, as they were as recently as the week before, or on 2019-Q3/Q4, for which our model forecasts nearly identical trajectories for the level of the S&P 500. 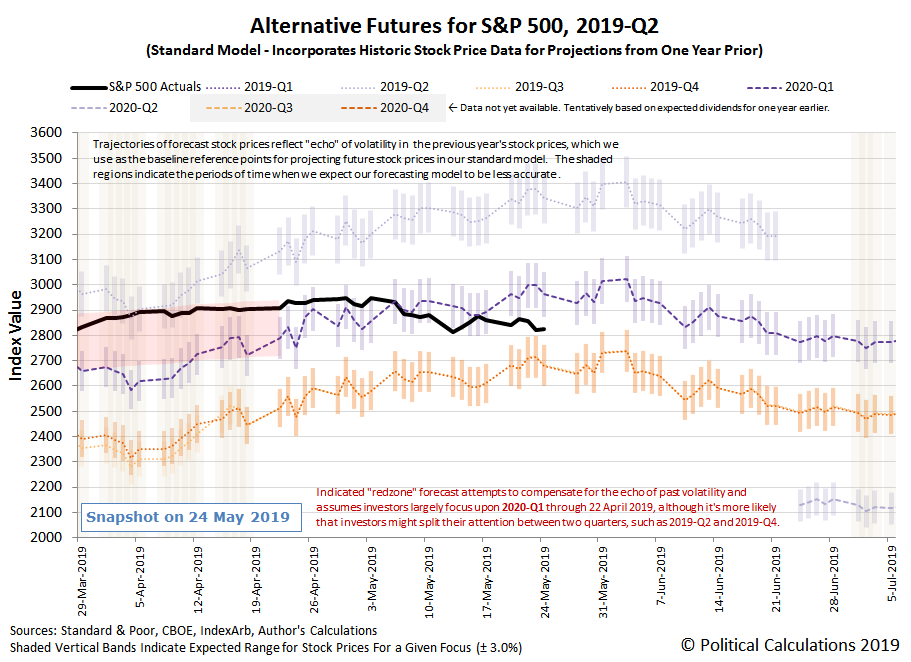 That brings up an interesting possibility. What if the dividend futures-based model we use in forecasting the alternative futures for the S&P 500 captured stock market investors reacting to the volatile shifts before bond market investors caught on to it? As you can see in the chart above, it shows the shift taking place as a growing deviation from the trajectory the model indicates the S&P 500 would have taken if investors had remained tightly focused on the future quarter of 2020-Q1 in setting stock prices beginning from a week beforehand, which could potentially explain why stock prices then didn't fall by as much as the "violent treasury move" in the bond markets suggests they should have when that adjustment finally arrived.

That may be attributable to the higher-than-average level of new information feeding into the market during the trading week ending on Friday, 24 May 2019, where the last day of the trading week ahead of the U.S. Memorial Day holiday was the slowest news day for finding market moving headlines during the week that was.

That's far from all the news affecting markets and the U.S. economy during the week. If you're looking for a bigger picture than the items we highlighted, check out Barry Ritholtz' listing of the week's five positives and five negatives that he found among the week's markets and economy-related news!