Political Calculations
Unexpectedly Intriguing!
02 July 2019
Dividends by the Numbers for June 2019 and 2019-Q2

June 2019 marked the end of a mixed quarter for dividend paying firms in the U.S. stock market in 2019-Q2, where the quarter featured both fewer dividend increases (bad) and fewer dividend cuts (good) than in the previous month and quarter.

The following chart visualizes the number of dividend increases and decreases in each month from January 2004 through June 2019. 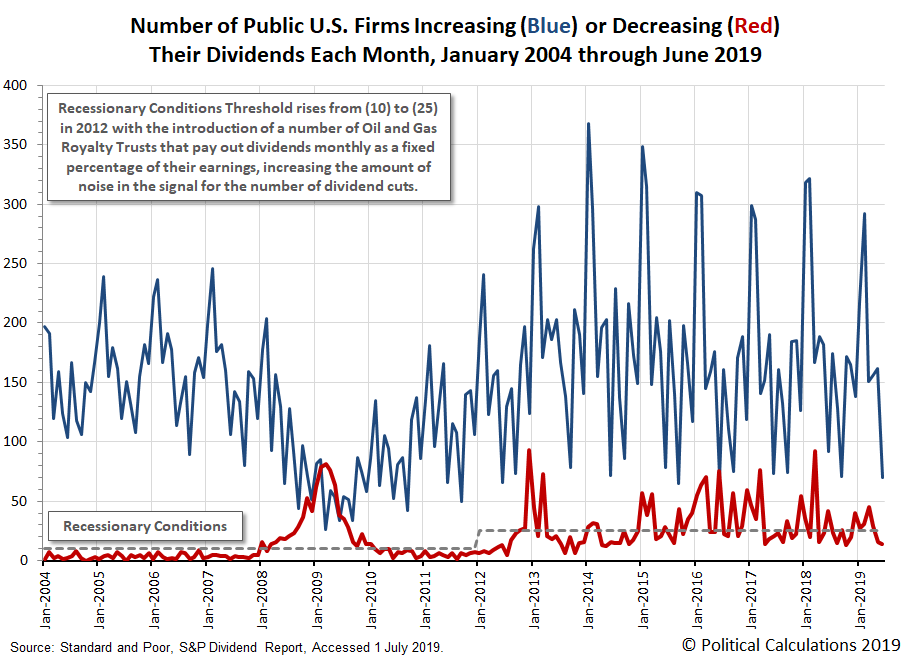 Standard and Poor reported the month's and quarter's metadata for dividends in the U.S. stock market:

For the second calendar quarter of 2019 ending on Friday, 28 June 2019, Standard and Poor tallied the following numbers for dividend rises and reductions:

The combination of fewer quarter-over-quarter and year-over-year dividend increases and dividend decreases represents a mixed outcome for the U.S. stock market. What it indicates is that the market went through a rough patch in late 2018/early 2019, which depressed the number of dividend increases in the just ended quarter of 2019-Q2, even though fewer companies were distressed enough to have to announce new dividend cuts.

That's particularly true for firms in the oil and gas industry, where falling prices led to falling revenues and profits during that time. Since then, increased geopolitical concerns have boosted oil and gas prices, but not so strongly that these firms are boosting their dividend payouts, mainly as global demand has decreased. The oil and gas industry will be an important sector to watch during 2019-Q3.

Likewise, financial firms, including Real Estate Investment Trusts (REITs), will also be a key industry to monitor in the months ahead because of the negative influence of the Fed's latest series of rate hikes, which have negatively impacted interest rate-sensitive firms in this sector. Because short term rates remain elevated, even as longer term rates have fallen with slowing economies around the world, this sector accounts for a significant portion of distressed firms that have announced dividend cuts in recent months.

Right now, investors expect the U.S. Federal Reserve will be cutting short term rates at least three times during the next three quarters to mitigate the problems its series of rate hikes combined with its quantitative tightening policies have created. We'll find out in the months ahead whether they acted either quickly enough or decisively enough to reverse the problems caused by their policies in the markets.