New York Fed president John Williams gave a prepared speech on Thursday, 18 July 2019. In the speech, he argued the Fed should do two things with its monetary policy learned from model simulations when it takes action to head off an economic downturn when interest rates are already low or are near what he calls the Zero Lower Bound (ZLB):

The first: don’t keep your powder dry—that is, move more quickly to add monetary stimulus than you otherwise might. When the ZLB is nowhere in view, one can afford to move slowly and take a “wait and see” approach to gain additional clarity about potentially adverse economic developments. But not when interest rates are in the vicinity of the ZLB. In that case, you want to do the opposite, and vaccinate against further ills. When you only have so much stimulus at your disposal, it pays to act quickly to lower rates at the first sign of economic distress.

This brings me to my second conclusion, which is to keep interest rates lower for longer. The expectation of lower interest rates in the future lowers yields on bonds and thereby fosters more favorable financial conditions overall. This will allow the stimulus to pick up steam, support economic growth over the medium term, and allow inflation to rise.

Investors interpreted those statements as calling for a more aggressive series of rate cuts than the expectations Fed officials have set forward to date, which for a moment, caused bond yields to fall, the value of the dollar to drop, and stock prices to sharply rise, at least until the New York Fed was forced to step in to "clarify" Williams' comments.

For the S&P 500 (Index: SPX), Williams' speech had the effect of focusing investors on 2020-Q1 more closely, with the probability of a fourth rate hike spiking over 50% on 18 July 2019. A day later, those odds dropped back below 50%, as indicated by the CME Group's FedWatch Tool:

That stock market investors have more closely tightened their focus on 2020-Q1 can be seen in our alternative futures 'spaghetti forecast' chart, which projects the potential future levels of the S&P 500 based on dividend futures-based model. 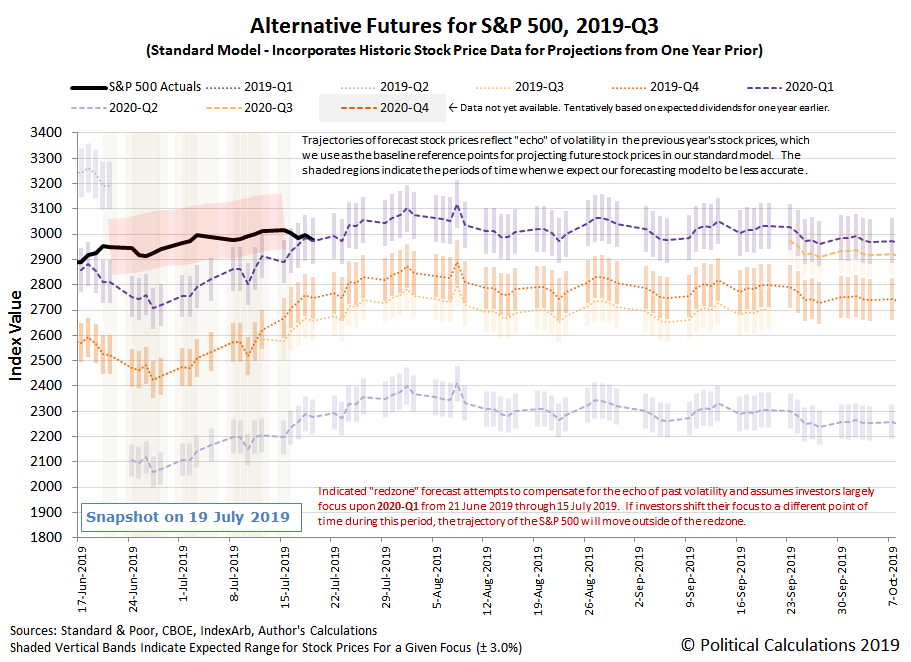 Even though investors maintained their forward-looking focus on 2020-Q1 and the expectations associated with that future point of time in setting current day stock prices, we believe the market is currently at a heightened risk of having investors shift their focus to other points of time in the future, where shifts toward any other quarter before 2020-Q3 would be accompanied by a significant decline in stock prices, with a shift toward 2020-Q2 being the largest and most negative. Such a shift would be driven by investors' response to the random onset of new information, which provides the random element in the market's quantum random walk.

Speaking of the onset of new information, here are the headlines that influenced investors during the third week of July 2019:

Barry Ritholtz weighed the news of the week negatively, finding 6 positives and 7 negatives.