From time to time, we'll conclude our more remarkable posts with the phrase "Welcome back to the cutting edge!" We're going to do that again today.

The reason we'll do that today is because of a new paper that was published just 20 days ago that describes cognitive decision making as the collapse of a quantum superstate. Phys.org's Christopher Packham provides the background for the application of "Quantum Random Walks" to decision making.

Decision making in an enormous range of tasks involves the accumulation of evidence in support of different hypotheses. One of the enduring models of evidence accumulation is the Markov random walk (MRW) theory, which assigns a probability to each hypothesis. In an MRW model of decision making, when deciding between two hypotheses, the cumulative evidence for and against each hypothesis reaches different levels at different times, moving particle-like from state to state and only occupying a single definite evidence level at any given point.

That new theory has a direct practical application, because it describes much of the behavior we've directly observed in how investors collectively set stock prices.

To see what we mean, let's update and animate alternative futures chart, which projects the likely trajectories that stock prices will follow based upon how far forward in time investors are collectively looking when they make their current day investment decisions, where we'll pick up the action beginning one month ago.

Each of the alternative future trajectories in the chart above represent a specific hypothesis, which is given by the acceleration, or change in the year over year growth rate, of the trailing year dividends per share expected to be paid out by the S&P 500 by the end of the indicated quarter.

At the beginning of the animation, we see that investors were tightly focused on 2015-Q3 on 29 July 2015, which makes sense because investors had strong reason to believe that the U.S. Federal Reserve was on track to begin hiking short term interest rates by the end of the quarter in September 2015, thanks to the Federal Open Market Committee's meeting and announcement issued that day. Thus, the trajectory indicated for 2015-Q3 represents the hypothesis that the Federal Reserve would hold to that policy.

Over the next week, the closing value of the S&P 500 closely tracked that trajectory, until moving higher on Monday, 10 August 2015, boosted by the speculative prospect that China, which announced disappointing economic data that day, would soon act to provide new stimulus measures for that nation's economy.

Stock prices remained elevated throughout the rest of that week as China made good on that speculation, as it announced the surprise devaluation of its currency on 11 August 2015 and by other measures that carried through 17 August 2015. Throughout this period, stock prices remained elevated just above the upper edge of the typical range of day-to-day volatility of stock prices that we would expect would apply for investors remaining focused on 2015-Q3. 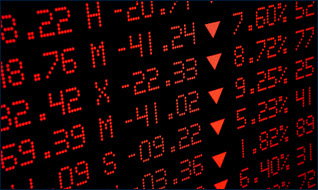 That positive speculation began to deflate on 18 August 2015 as China's stock market began to decline, as China's government began to back off from enforcing its previous extraordinary measures to arrest its decline earlier in the summer.

That action also coincided with the two-year anniversary of the so-called "taper tantrum" in the U.S. stock and bond markets, which would appear to be relevant since we used historical stock prices from this period as the baseline from which to project the likely trajectories shown in our chart above. Which we began doing on 28 July 2015 because the period was much less volatile that the one-year ago period that we would normally use to forecast the future likely trajectories of stock prices in our standard model of how stock prices work.

But then, on Monday, 24 August 2015, stock prices closed far lower than would be consistent with investors remaining focused on 2015-Q3 alone. Instead, stock prices plunged to a level that was much more heavily weighted toward 2016-Q1, which would be consistent with the hypothesis that the Federal Reserve would back off its plans to hike short term interest rates in the U.S. until that time at the earliest based on the continuing deterioration in China's stock markets.

On Tuesday, 26 August 2015, a sizeable rally in the U.S. stock market throughout much of that day "went up in smoke", as stock prices closed that day at a level that was fully consistent with investors having shifted their forward looking focus to 2016-Q1, in effect, collectively betting that a September 2015 rate hike in the U.S. would now be off the table. Coincidentally that day, Federal Reserve Bank of New York president William Dudley said that a September 2015 rate hike was "less compelling".

The downward swinging pendulum of investor expectations for when the Fed would seek to hike interest rates reversed on the next day with the release of positive economic news, giving more strength to the hypothesis that the Fed would hike rates in 2015-Q3. Overall however, stock prices moved to be about halfway between the levels that would be fully consistent with either 2015-Q3 and 2016-Q1, suggesting that investors gave equal weighting to the difference between these two future quarters in setting stock prices.

The positive momentum continued on 27 August 2015, with the significant upward revision of U.S. GDP recorded in the second quarter of 2015. That news strengthened the view among U.S. investors that the Fed would hold to its September rate hike plans, with the S&P 500 closing in on a level that would be more heavily weighted in favor of that hypothesis.

On Friday, 28 August 2015, there was very little movement in stock prices, but that would be expected for investors having focused once more on the likelihood that the Fed would indeed hike interest rates in September 2015, a view given great emphasis during the day by Stanley Fischer, the Number Two official at the U.S. Federal Reserve. 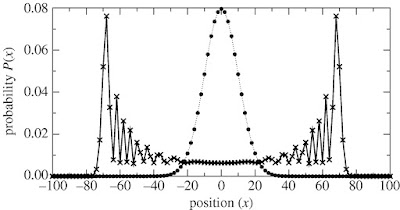 There are four things we really need to point out about the movement of stock prices during the period from the close of trading on 21 August 2015 through 28 August 2015. First, the concept of a quantum random walk goes a very long way toward explaining why stock prices just simply don't jump straight from one quantum level to another. The uncertainty that investors have regarding the likelihood of future events can restrain the potential extent of such movements.

Second, the quantum levels themselves are not random. They're based on the real and quantifiable expectations for the change in the growth rate of dividends per share that will be paid out at specific points of time in the future, which are projected on top of where stock prices are and have been. That's important because it is the relative distance between the quantum levels that exist when investors are choosing between the hypotheses that apply at different points of time in the future that determines whether stock prices follow a true random walk-style Brownian Motion, or go into a full Lévy Flight such as we observed in the last week.

Third, as stock prices change, so does the likely trajectory of stock prices in the future. Given the math involved, we now see the echo of the China-driven stock market crash in September in our animated chart above.

However, that doesn't mean that stock prices will follow that trajectory. In general, the echoes of past volatility do not tend to affect the trajectory of current day stock prices, although in rare cases, they can. What provides the potential for determining whether they might is the amount of money that might have been tied up in investments with fixed maturity dates, such as options contracts or bonds, which would come due when such echoes appear in our model.

But whether they do have any real world impact depends on what the investment climate looks like when they do come due. It is always the prospects for the future that determine the actual trajectory of stock prices.

Fourth, the existence of the quantum random walk phenomenon helps explain why stock returns have fat tail distributions. To the extent those distributions primarily resemble bell curves is an indication of the extent to which investors collectively tend to focus on one potential future, or investment-driving hypothesis, at a time as they make investing decisions.