The toll of the U.S.-China tariff war continued to grow in May 2019, with the gap between the pre-trade war trend and the trailing twelve month average of the total valuation of goods and services directly traded between the two nations widening to $8.3 billion for the month. Since both nations first slapped tariffs on each others goods back in March 2018, the cumulative loss in the value of goods exported between both nations now totals $42.9 billion.

The year-over-year growth rate of each nation's exports to each other continues to fall in negative territory, which in previous occurrences, has coincided with periods of sharply slowing economic growth or recessions. 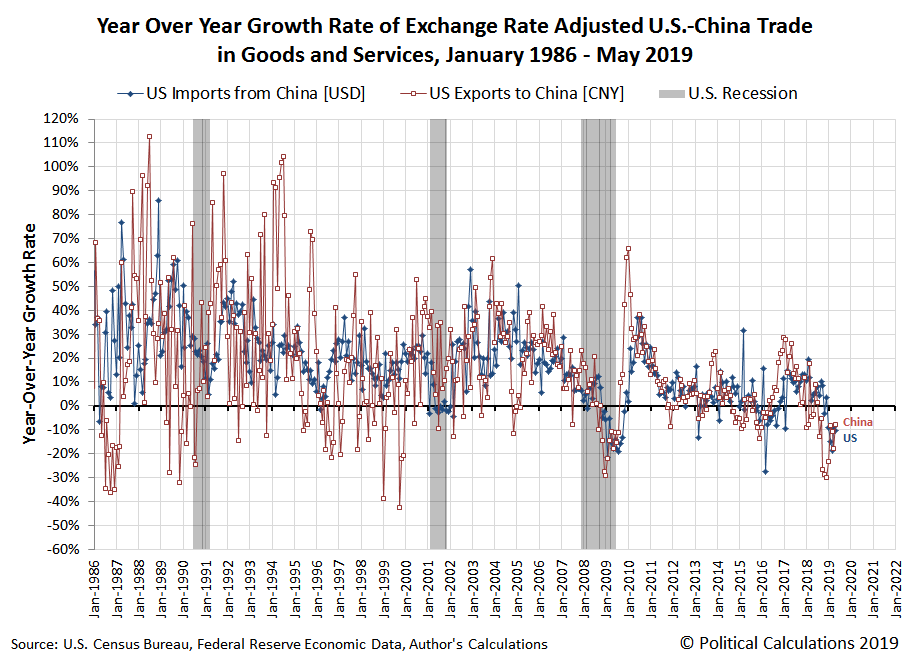 The charts above are based on international trade data reported by the U.S. Census Bureau, which were recently updated to include May 2019. A Reuters poll of China's exporters for June 2019 indicates that the decline in China's exports extends far beyond just the U.S.:

Imports are expected to have fallen for a second straight month, pointing to continued weakness in domestic demand and highlighting the need for Beijing to roll out more economic support measures.

If Friday’s trade data are in line with the downbeat forecasts or worse, it could spark concerns about a sharper-than-expected slowdown in China and the risk of a global recession.

China’s June exports are expected to have declined 2 percent from a year earlier, according to the median estimate of 34 economists in a Reuters poll, compared with a 1.1% gain in May....


Some analysts had attributed the unexpected rise in shipments in May to a rush by Chinese exporters to beat additional U.S. tariffs being threatened by Washington.

China's economy is likely to turn in its lowest economic growth numbers for the last 30 years in 2019, while one of China's leading exporters indicates the tariff war is taking a heavy toll on Chinese manufacturers as firms seek to move production to other nations to avoid the tariffs.