A month ago, we projected that California's total preliminary Point-In-Time Count for its homeless population would fall within a range between 149,000 and 155,000. With updated reporting of the 2019 census of California's homeless population now covering 35 of 40 regions within the state, we can now update that projection which we believe will likely now fall within the top half of that range, between 153,400 and 155,400. 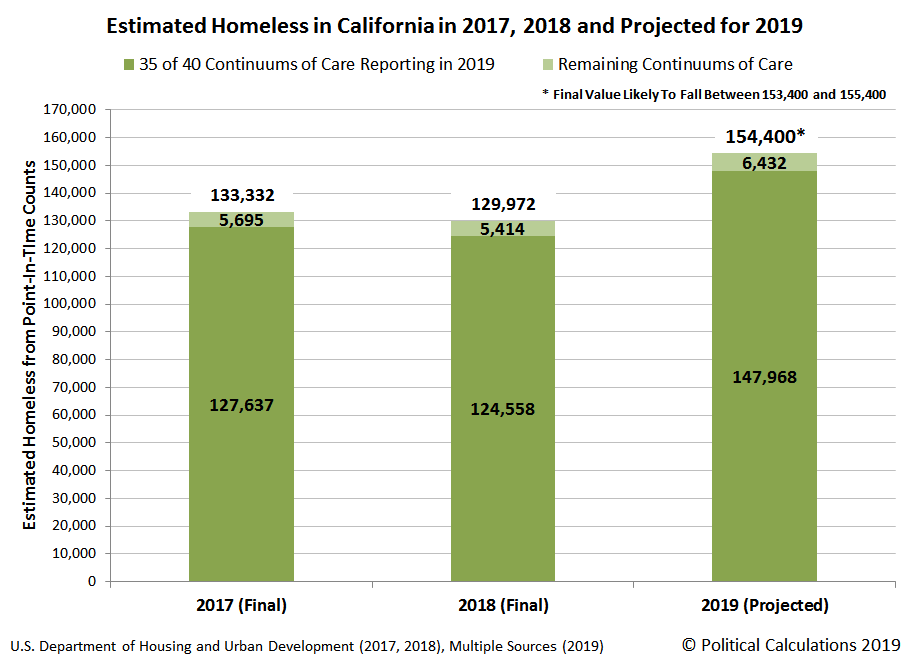 The five areas that have not yet reported their 2019 Point-In-Time homeless count figures include the Colusa-Glenn-Trinity tri-county region, El Dorado County, Mendocino County, Monterey-San Benito counties, and Napa County.

Assuming that these five remaining regions for which preliminary data is not yet available will have zero change from their previous estimates of their homeless population, the minimum number of homeless in California will rise to 153,400 after rounding to the nearest hundred. If these five regions have the same 19% increase recorded in the other 35 regions within the state, the number of homeless in California will rise to 154,400 (the number indicated on the chart above). If 154,400 is the midpoint of a reasonable range for the preliminary count to now fall, the top end of that range would slightly increase from our previous estimate of 155,000 to 155,400.

Based on past history, we believe the homeless counts for Los Angeles County and San Francisco will be revised downward, as analysts make corrections for double-counting and other errors in the preliminary figures reported for these high population areas. We continue to anticipate the final estimate of California's homeless count in 2019 will exceed 150,000.

For historic data, the U.S. Department of Housing and Urban Development provides an Excel Spreadsheet with data from the annual Point-In-Time Estimates by Continuum Of Care from 2007 through 2018, where this data was last updated on 11 December 2018.