Going into the end of July 2019, investors expected the U.S. Federal Reserve would cut short term interest rates by a quarter point, which they anticipated would be the first of a series of at least three rate cuts between now and the end of 2020-Q1.

While the Fed delivered on a quarter-point rate cut on Wednesday, 31 July 2019, investor expectations for the future were shaken when Fed Chair Jerome Powell uttered the words "it's not the beginning of a long series of rate cuts" at the press conference following the announcement of the rate cut, which immediately caused investors to shift their attention toward the nearer term future as the odds of additional rate cuts in upcoming quarters came into question.

That shift in expectations kicked the S&P 500 (Index: SPX) onto a new, negative Lévy flight, the fourth for 2019, as investors appear to have shifted their focus from considering whether the Fed would cut rates a third time in 2020-Q1 to whether they might cut the Federal Funds Rate at all in 2019-Q4. 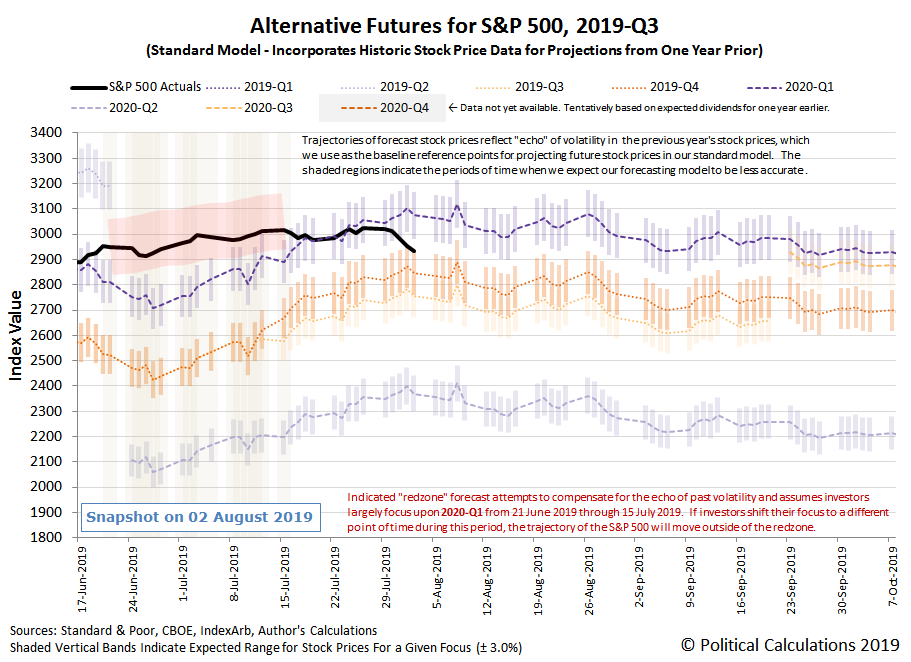 While Powell's words started the S&P 500 on its latest quantum random walk, President Trump's surprise action to impose new tariffs on Chinese exports to the U.S. whipsawed the market and prompted investors to focus greater attention on the nearer term quarters, where suddenly, the probability of additional Fed rate cuts being announced during them rebounded.

You can see some of that activity in the animated table below, where we're experimenting with overlaying the CME Group's FedWatch Tool's indicated probabilities of rate cuts at various upcoming Fed meetings from the market close on Wednesday, 31 July 2019 with where they ended the week on Friday, 2 August 2019:

Here are the major market-moving headlines that stood out to us during the week that was, which was pretty quiet until the Fed shook up the market's expectations on Wednesday, 31 July 2019:

If those headlines aren't enough for you, Barry Ritholtz succinctly summarized no fewer than 8 positives and 8 negatives he found during the week's economics and market-related news flow.