Prompted by China's latest escalation of its trade war with the United States, with China's central bank allowing the Chinese yuan to decline in value relative to the U.S. dollar with the apparent blessing of top Chinese government officials, the S&P 500 (Index: SPX) suffered a 2.98% drop on Monday, 5 August 2019, with the index closing the day at $2,844.74. 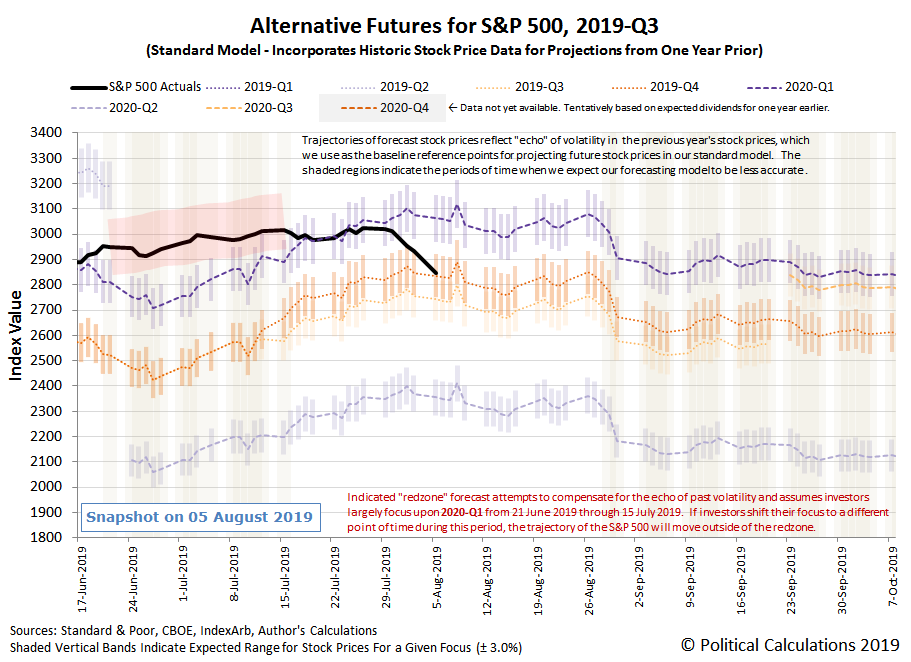 That large percentage change qualifies the stock market's volatility on Monday, 5 August 2019 as interesting, where we consider an interesting level of volatility as occurring whenever the closing daily value of stock prices changes by more than 2% from the previous trading day's closing value, for statistical reasons.

But with a change in value of nearly 3% from the previous day's close, that represents an even more interesting threshold for "interesting", as that level falls more than three standard deviations outside of the mean day-to-day change recorded in the S&P 500 over every trading day from 3 January 1950 through 5 August 2019, where only 1.4% of all 17,510 trading days recorded during this period have seen similarly large changes from the previous day's closing value, which are roughly equally split between increases and decreases. 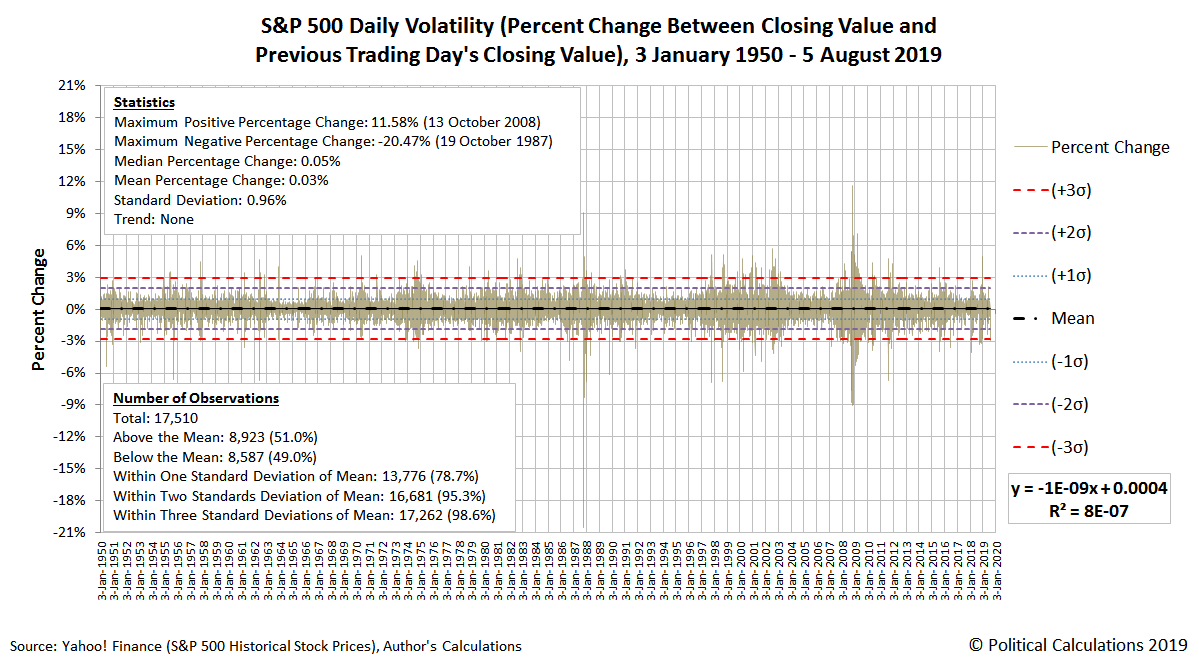 Focusing on just the decreases, there have been just 131 recorded in the more than 69 years from 3 January 1950 through 5 August 2019. We've recorded the data for each the S&P 500's worst ever one day declines recorded during the modern era of the U.S. stock market in the following dynamic table, where you can click the column headings for Date, Open, High, Low, Close, and Percent Change from Previous Close, you can sort the data from either high-to-low, or from low-to high. If you're accessing this article from a site that republishes our RSS news feed, please click through to our site to access a working version of the dynamic table.

The nearly 3% drop in the S&P 500's value on Monday, 5 August 2019 pales in comparison to the worst ever single day decline of 20.47% that was recorded back on Monday, 19 October 1987, which earned that day the title of "Black Monday", the single worst day ever recorded in U.S. stock market history.

Note that many of these relatively rare large one-day declines have tended to be clustered together in time. Whether that happens now in 2019 will depend on the flow of new information that might cause investors to shift their attention to other points of time in the future, where an additional 3% drop from its current level would coincide with investors shifting their attention to the current quarter of 2019-Q3. And as you can see from our first chart, any news that might fix the attention of investors on 2020-Q2 would coincide with a much, much larger crash in stock prices.

That assumes, of course, that there is no erosion in the expectations in the S&P 500's dividends per share at these future points of time, which would amplify the indicated potential declines.