We often use the phrase "Lévy flight events" to describe the outsized movements of stock prices, but we've never really addressed the reason why we use that terminology!

Let's start by looking at the day-to-day volatility of stock prices for the S&P 500 (Index: SPX) since 3 January 1950. In the following chart, we've shown that volatility as the percentage change from the previous trading day's closing value for the index, where we've also presented the mean and standard deviation of that variation all the way through the close of trading on Friday, 20 September 2019. 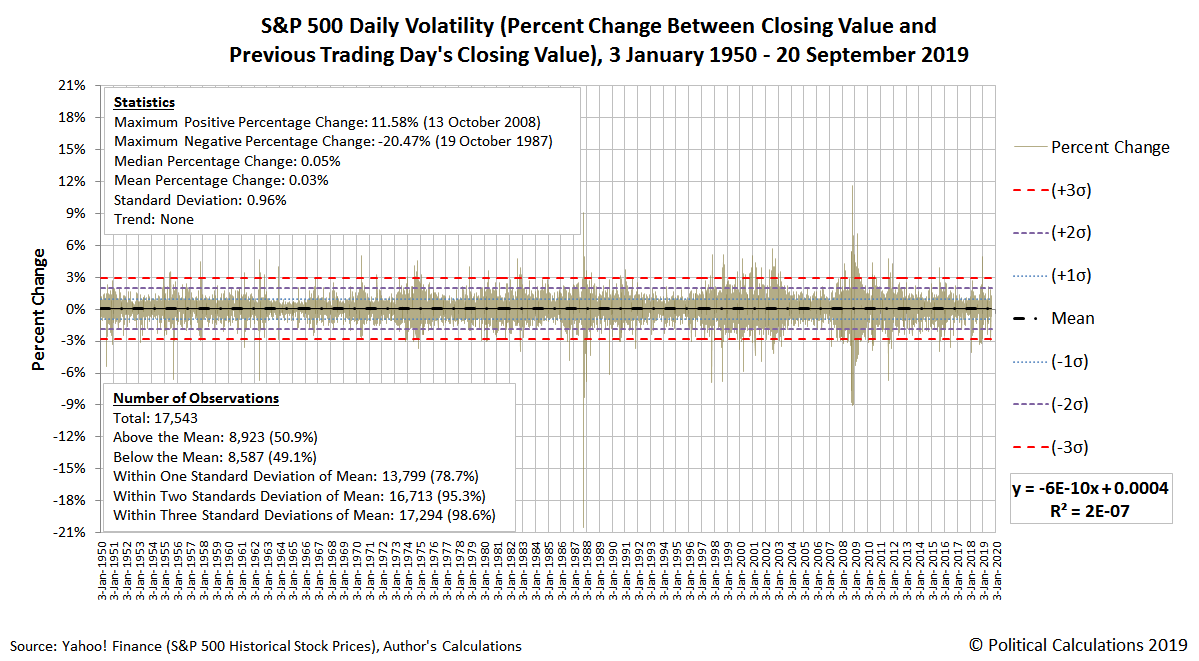 If the volatility of stock prices followed a normal Gaussian distribution, we would expect that:

Already, you can see that the day-to-day variation in stock prices isn't normal, or rather, is not well described by normal Gaussian distribution. While there are about as many observations between two and three standard deviations of the mean as we would expect in that scenario, there are way more observations within just one standard deviation of the mean than we would ever expect if stock prices were really normally distributed.

Additional discrepancies also show up the farther away from the mean you get. There are more outsized changes than if a normal distribution applied, which is to say that the real world distribution of stock price volatility has fatter tails than would be expected in such a Gaussian distribution.

There are other kinds of stable distributions that also have a central tendency of for variation in data to appear near the mean that do a better job of describing the variation in stock prices. One of these was developed by French mathematician Paul Lévy and is now known as the Lévy distribution. 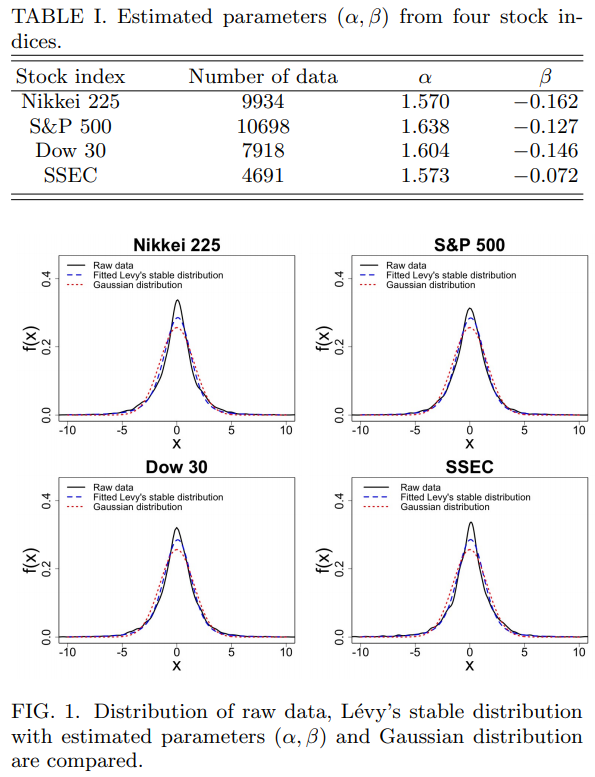 For all four stock market indices, the Lévy distribution outperforms the normal Gaussian distribution in describing the variation of stock prices. What's more, Fukunaga and Umeno find all four indices share very similar parameter values for their Lévy distributions in their period of interest from 2 January 1975 to their arbitrary cutoff date of 31 May 2017.

The parameters (α, β) show a similar value regardless of the stock index. The stability parameter α of all the stock indices were around α = 1.6 which seems to be universal, and lower than the Gaussian distribution corresponding to α = 2. As β has a negative value, it is shown that the stock market has a skewness. Then, the parameters fluctuate by dividing the analyzing time-windows. There is a correlation between the price and (α, β), especially when the financial crisis occurred.

And that's why we use the phrase "Lévy flight events" whenever we discuss days where stock prices changed by very large percentages from the previous day's closing value.