Political Calculations
Unexpectedly Intriguing!
October 16, 2019
Inside the Decline of the Out-Of-Pocket Cost of Health Insurance in 2018

Americans collectively spent over $447.5 billion of their own money to cover the cost of unsubsidized health insurance in 2018, an increase of 0.8% from the more than $443.8 billion spent in 2017. At an average annual cost of $3,405 per household consumer unit however, 2018's spending represents the first year over year decline in this category of consumer expenditures since 1996, falling from 2017's average cost per household consumer unit of $3,414. 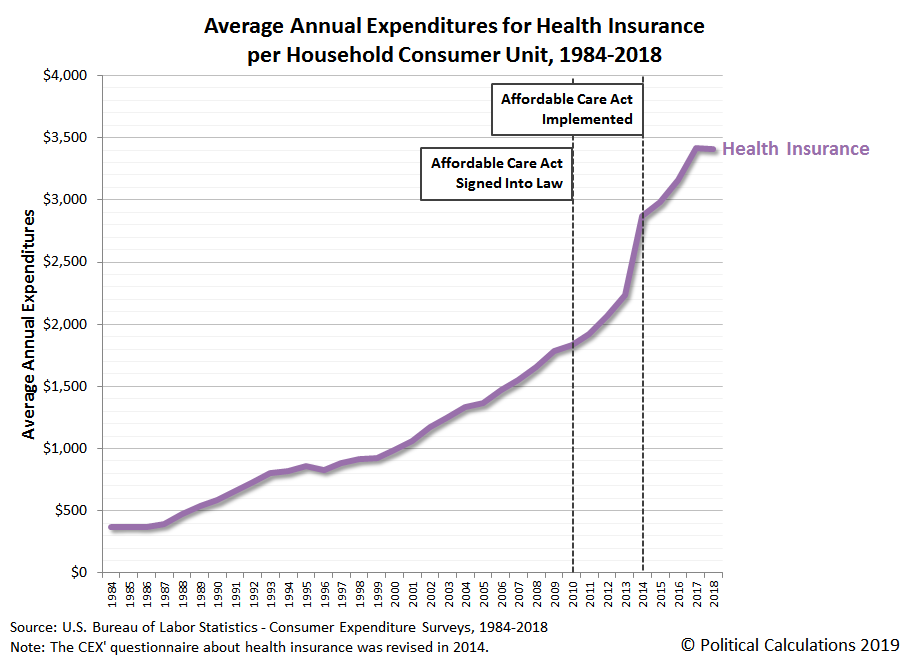 This data comes from Consumer Expenditure Survey (CEX), which shows the continuing effect of the skyrocketing cost of health insurance caused by the passage and implementation of the Affordable Care Act during the Obama administration. In this case, the rapid escalation of health insurance costs to higher income earning households that could previously afford coverage may be prompting them to choose to become uninsured, which would contribute to the indicated reduction in average cost.

From 2017 to 2018, the number of individual uninsured Americans rose by 1.9 million, from 25.6 million to 27.5 million, which the U.S. Census Bureau reveals a very large portion of this increase was uniquely concentrated in households earning well above the median household income of $61,392 for 2018:

Between 2017 and 2018, overall health insurance coverage decreased 1.0 percentage point for people in families with income from 300 to 399 percent of poverty and 0.8 percentage points for people in families with income at or above 400 percent of poverty. During this time, the overall health insurance coverage rate did not statistically change for any other income-to-poverty group.

Here's how that translates into the number of affected individuals:

Households in this category, which includes many headed by small business owners and self-employed income earners who don't have access to other employer-provided health insurance coverage, are largely choosing to go from paying top dollar or near-top dollar for health insurance to no such coverage, even though they would still be subject to additional income taxes from the Affordable Care Act's mandate penalty. For these higher income earning households, since the rising cost of coverage they must pay has been driven up by the requirements of the Affordable Care Act to the point where it far exceeds the value of tax subsidies available to them, dropping the amount they pay for family coverage from nearly $20,000 to $0 per household is having a noticeable effect on the overall average cost paid out of pocket by all American households for health insurance, which is being captured by the CEX data for 2018.

The Trump administration has introduced reforms aimed at arresting the skyrocketing cost of health insurance for these households in late 2018 to address their specific needs, which may not show an effect until the 2019 data becomes available.