The S&P 500 (Index: SPX) toyed with reaching a new all-time high on Friday, 25 October 2019, buoyed up by positive earnings reports and news reports the U.S. and China were close to hammering out the details of the 'Phase 1" trade deal. Toyed with, but ultimately retreated below its current record high to close out the week at 3,022.55.

That buoyancy was enough to push the S&P 500 up to the top edge of our dynamic redzone forecast range, which assumes that investors would be splitting their forward-looking attention about 50/50 between the current quarter of 2019-Q4 and the following quarter of 2020-Q1 through 8 March 2019. We think this level is consistent with investors putting a heavier weight on 2020-Q1 and the expectations associated with it in making their current day investment decisions, although the mixed earnings news coming out now for U.S. firms is responsible for holding a significant portion of their attention on the current quarter of 2019-Q4. 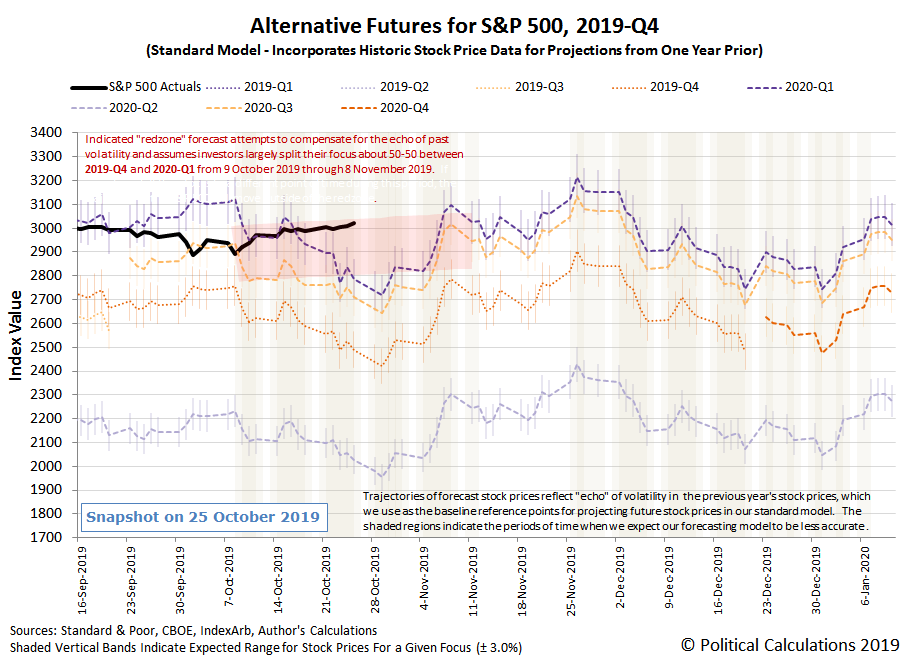 Meanwhile, investors because they are betting the Federal Reserve will act next week to cut the Federal Funds Rate by another quarter point, which appears to be the last rate change they are now anticipating in 2019. The CME Group's FedWatch Tool is forecasting about a 46% chance of the Fed cutting rates by another quarter point at the Federal Open Market Committee's 18 March 2020 meeting, where the odds of that happening have been fluctuating around the 50% mark in recent weeks, which is why we believe 2020-Q1 is commanding a larger share of the forward-looking focus of investors at this time. 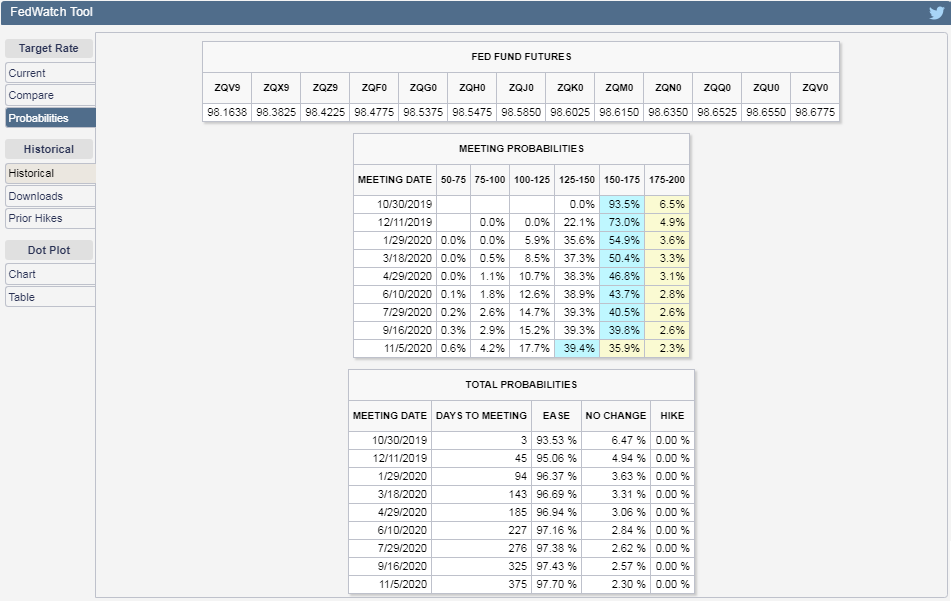 The rate change probabilities projected by the FedWatch tool after the Fed's upcoming 20 April 2020 meeting were not available until after the market closed on 25 October 2019. This additional information indicates a greater than 50% probability of another quarter point rate cut occurring as early as the end of 2020-Q2, which rises to more than a two-thirds by early November in 2020-Q4.

This past week has also seen considerable activity with the S&P 500's quarterly dividend futures, which has shifted several of the trajectories presented in our alternate futures chart above, in addition to our dynamic redzone forecast which is defined by those alternate future trajectories.

Here are the news headlines that caught our attention for their market moving potential in the fourth week of October 2019, which was a relatively quiet week since the Fed's minions have been silenced by the communications blackout period preceding the FOMC's two day meeting in the final week of October 2019.

If you would like to see the bigger picture beyond the headlines we've presented, Barry Ritholtz identified six positives and six negatives in the past week's economics and market-related news.