The stock prices of Boeing (NYSE: BA) and Spirit AeroSystems (NYSE: SPR) tend to be strangely synchronized. Which makes sense because Spirit AeroSystems is a major supplier to Boeing, but the last few months have seen the trajectories of the two companies' stock prices take significantly diverging paths, only to recouple once more.

Let's start by reviewing the path that each company's stock price has taken since mid-October 2018, shortly before the first crash of Boeing's 737-MAX commercial transport aircraft on 29 October 2018: 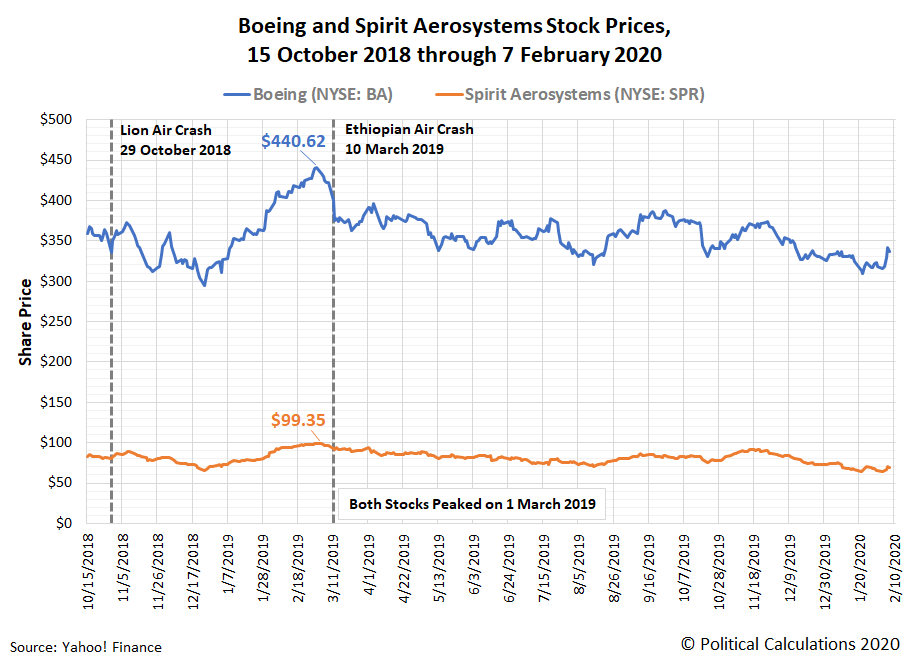 Both firms' stock prices peaked on 1 March 2019, with Boeing at $440.62 per share and Spirit AeroSystems at $99.35 per share. Alas, while you can get a sense that both companies' stock prices have generally risen and fallen together, the linear scale of the chart doesn't do justice to describing how closely synchronized both stock prices have been with respect to one another, while showing the data using a logarithmic scale wouldn't improve that situation.

But when we present show each company's stock price as a percentage of their 1 March 2019 peak values however, the synchronization between the two leaps out: 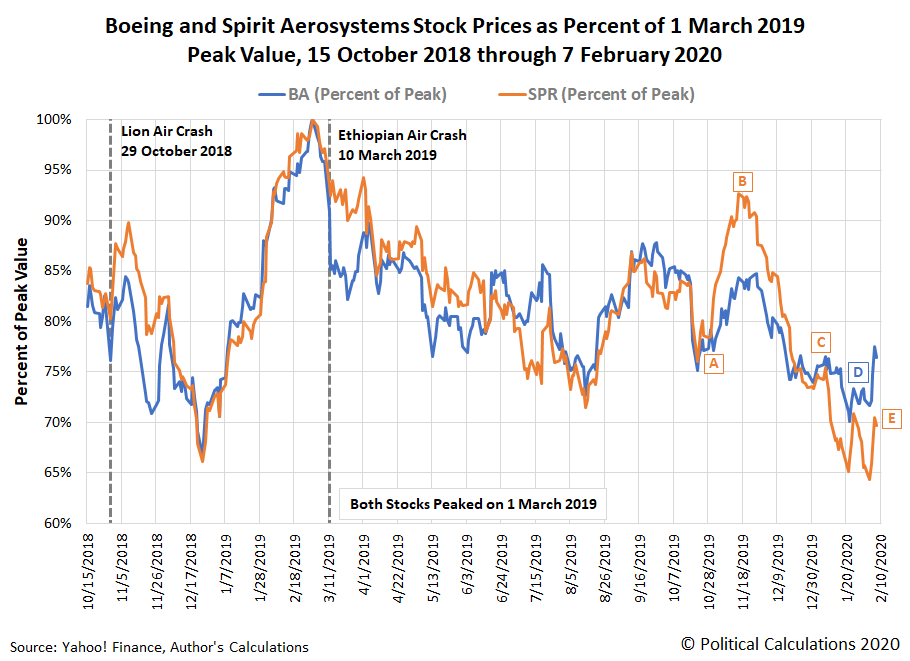 Here, we find that in percentage terms, both companies stock prices have generally held with within several percentage points of one another in the period from 15 October 2018 through 31 October 2019, but there have diverged significantly in the period since. The following list of news headlines corresponds with the boxed letters indicated on the chart and describes the reasons for the divergences:

The halt of 737 MAX component production at Spirit AeroSystems has caused SPR's stock price to fall several percentage points below BA's stock price, which is a new divergence. Since SPR has cut its dividend, the question now becomes "Will Boeing be following suit?"

Since the company has taken on billions of new debt, and has not yet determined when it might be able to finally resume new 737 MAX deliveries, pressure will build for Boeing to cut its dividend to preserve its operating cash flows. We suspect that reality may soon lead investors to bid down Boeing's stock price in anticipation of that change, which would re-synchronize BA's stock with SPR's.

On the other hand, if Boeing finally gets its operations in order and gets the FAA to buy into its recovery plans, the stock prices of both companies would benefit. It's all a question of timing for which of these scenarios might play out first.

Meanwhile, all of that is separate from the effect of China's coronavirus epidemic on both companies' supply chains and customer demand, which will also affect their potential recovery paths. Given the importance of aerospace production to the U.S. economy, Boeing's continuing 737 MAX problems look like they will be a source of drag for some time.