On Thursday evening, 19 March 2020, the California's governor ordered businesses to close across the state and for residents to stay at home in an effort to prevent the further spread of the SARS-COV-2 coronavirus. By Friday evening, 20 March 2020, four other state governors had followed suit in New York, Connecticut, Illinois, and Pennsylvania, instantly throwing the U.S. economy into a national recession. At this writing, these states will soon be followed by New Jersey in imposing restrictions on the movements of their residents, putting one-in-five Americans under such orders. 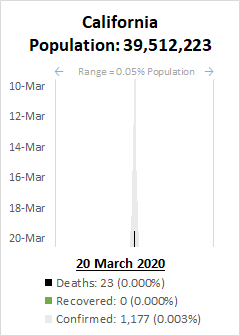 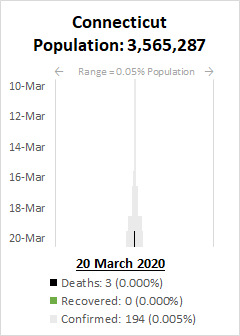 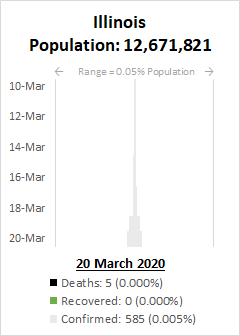 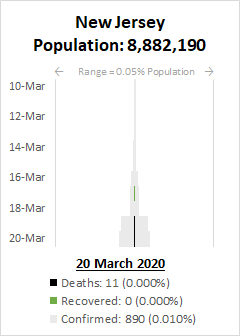 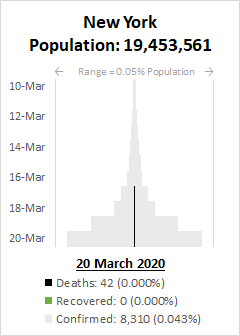 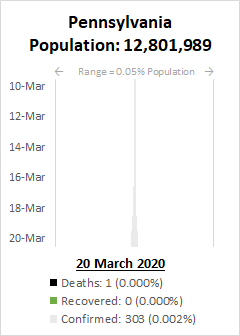 For this skyline chart presentation, the horizontal scale of the individual tower charts has been indexed to the same scale, representing 0.05% of each state's population, with the charts indicating each state's confirmed cases, recovered patients, and deaths as a percentage of the state's population. The data for each is taken directly from Johns Hopkins' CSSE time series datasets.

We should note that at this point, the progression charts for each state represent more the rapid expansion of testing than the speed of the spread of new viral infections, where the limited number of tests whose results have been reported don't represent a random sampling, but instead the results of testing that has been prioritized to focus on patients already suspected of having been infected.

Update: Here's a very large chart showing the tower charts for all 50 states, and also the territories of the District of Columbia and Puerto Rico: