The response to the coronavirus pandemic in the U.S. sank the S&P 500 on Friday, 20 March 2020, where after having been flat for most the day, the deteriorating outlook for the U.S. economy was aided by New York Governor Andrew Cuomo's order to close non-essential businesses and for New York residents to stay at home, rattling traders and investors. The S&P 500 went on to close the day at 2,304.92.

The action is significant because with California having ordered its residents to stay at home on Thursday evening, the statewide economy shutdowns will effectively swing the U.S. economy instantly into recession.

The outlook for S&P 500 dividends continued to deteriorate, with the future quarters of 2020-Q2 through 2021-Q1 seeing declines in expected payouts. With the closing of the futures contract period for 2020-Q1, that quarter saw a boost, but that's looking backwards, not forwards. The following chart shows where the expectations for S&P 500 quarterly dividends stands as of the close of trading on Friday, 20 March 2020. If you've seen last week's edition of our S&P 500 chaos series, but without the daily updates, please note we were forced to change the vertical scale of the chart to accommodate the deterioration in expectations for dividends.

We were also forced to reset the vertical scale of the alternative futures chart. Here's the chart as updated through the close of trading on Friday, 20 March 2020: 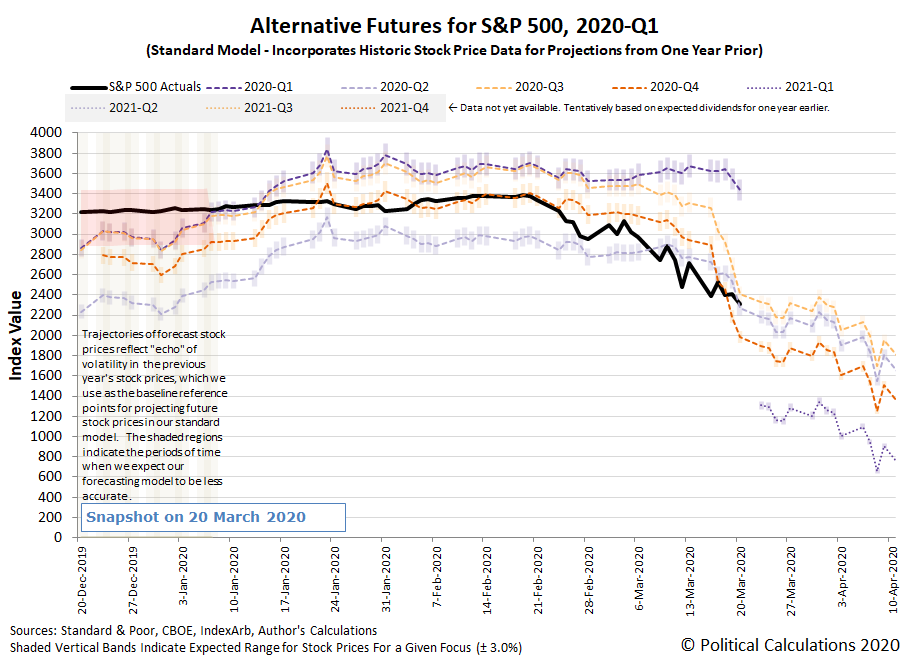 The actual trajectory of the S&P 500 is consistent with investors focusing on 2020-Q2 in setting stock prices, which is nearly a best case scenario given how much dividend futures have fallen.

As for why that's happening, here's the more significant headlines we flagged throughout the entire past week. There's been quite a lot of significant news:

These are the headlines that stood out to us for their market moving potential. Elsewhere, Barry Ritholtz rounds up the positives and negatives he found to be notable in the past week's economics and market-related news.

You may want to bookmark the original version of the article that appears on our site, since we'll be attaching daily updates while the market's volatility remains elevated. If you're reading this article on a site that republishes our RSS news feed, you'll only see the article as it appeared whenever the editor of the site where you saw it pulled it from the news stream!

The positive event was the Fed's announcement on Sunday, 22 March 2020 that it would enter uncharted territory in supplying liquidity to corporations, where there has been the equivalent of a run on the proverbial bank, particularly by firms seeking to secure cash to stay afloat in a world impacted by government-ordered coronavirus economic shutdowns.

The negative event was the U.S. Democrat party leadership's decision to play games and use emergency legislation to cram through their nakedly partisan agenda, adding new demands at the last minute and derailing a $1 trillion relief bill for U.S. businesses that had up to that point had been put together with strong bipartisan support.

All this had happened before the market opened today. Gotta give credit to ZeroHedge's impromptu event analysis: 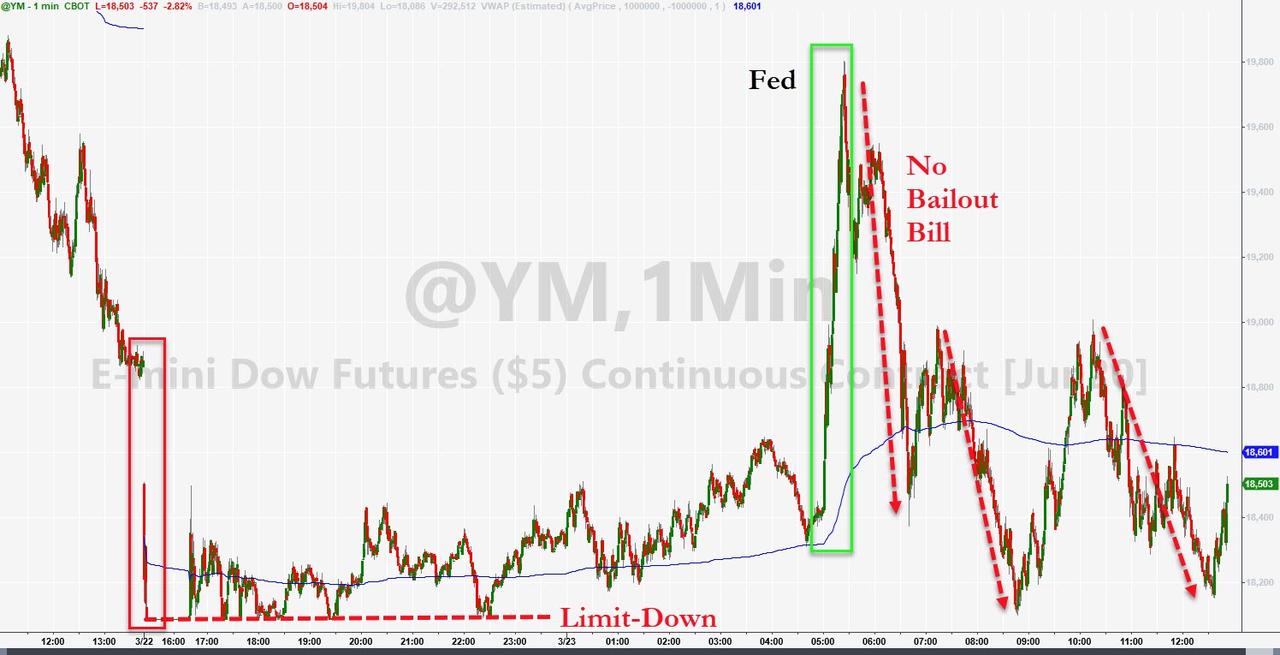 Dividend futures for 2020-Q2 dropped from the $13.75 that was recorded last Friday to $12.40 today, with other future quarters seeing relatively little to no changes. The S&P 500's drop on the day seemed to be more consistent with investors focusing on 2020-Q3 in making their current day investment decisions, as suggested by the alternative futures spaghetti forecast chart. Click on the images below for larger versions of the charts. 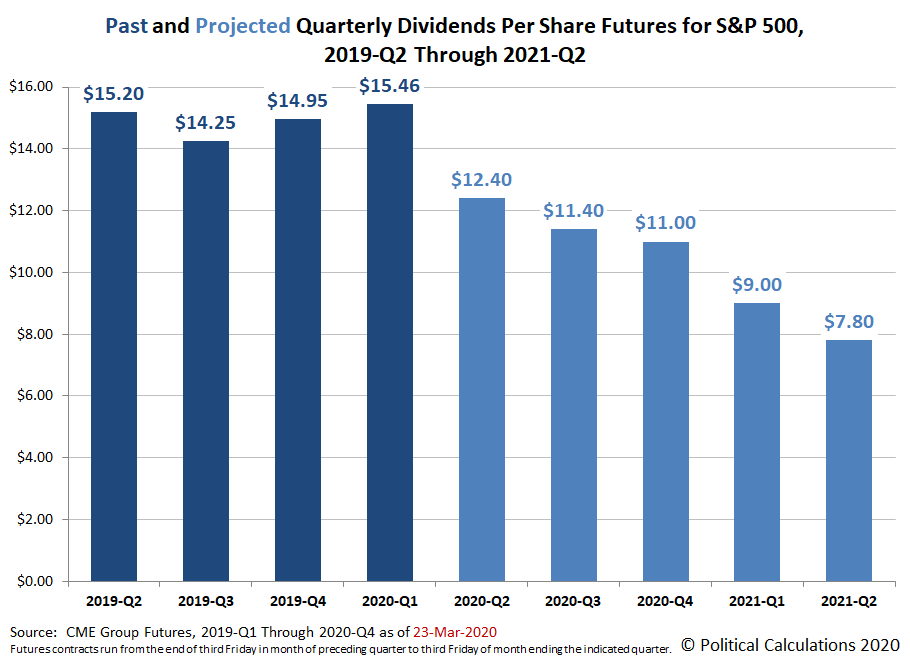 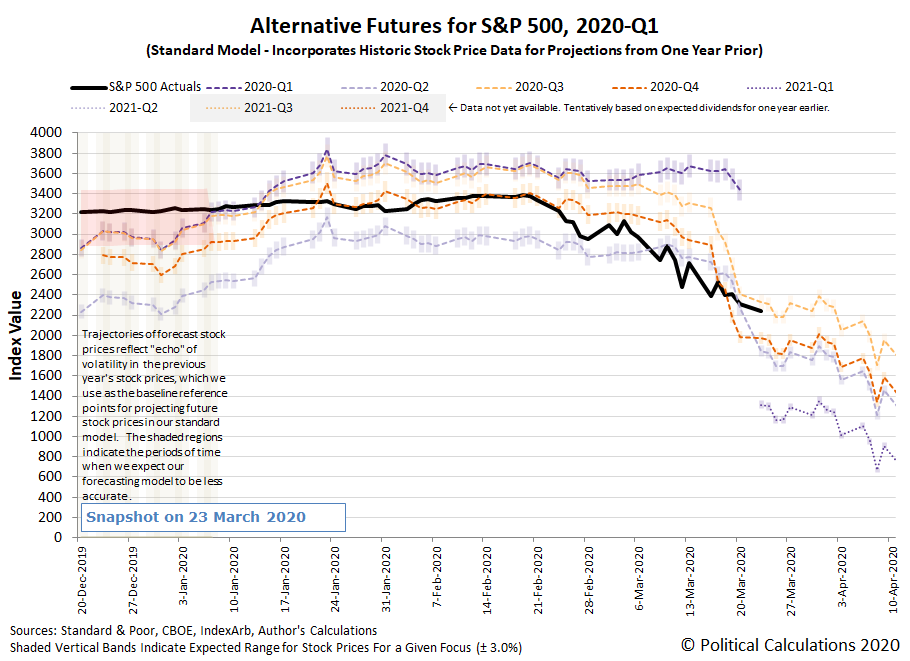 Speaking of which, it appears they are closer to having the CME Group FedWatch Tool back in service. We think they still need to sort out how they'll adapt it to handle potential negative rates, but for now, it indicates that the Federal Funds Rate won't be rising above the 0-0.25% range anytime in the tool's foreseeable future.

Update 24 March 2020, 6:00 PM Eastern: The biggest positive news on the day was the Fed's and the ECB's actions to alleviate the major shortage of U.S. dollars that has developed in the world economy.

Investors were also optimistic regarding a now $2 trillion relief bill that congressional leaders and the Trump administration claim is close at hand, but nothing passed out the Congress before the closing bell for the day.

Still, even without that relief bill moving forward, it's impressive to see the power of large buckets of money to generate a phenomenal level of upward speculation in stock prices, which gave the Dow Jones Industrial average its strongest one-day performance since 1933. For the S&P 500, we can see the effect of the speculative boost in its rising above all of the potential trajectories associated with the expectations for dividends in each upcoming future quarter we're currently tracking in the alternative futures chart: 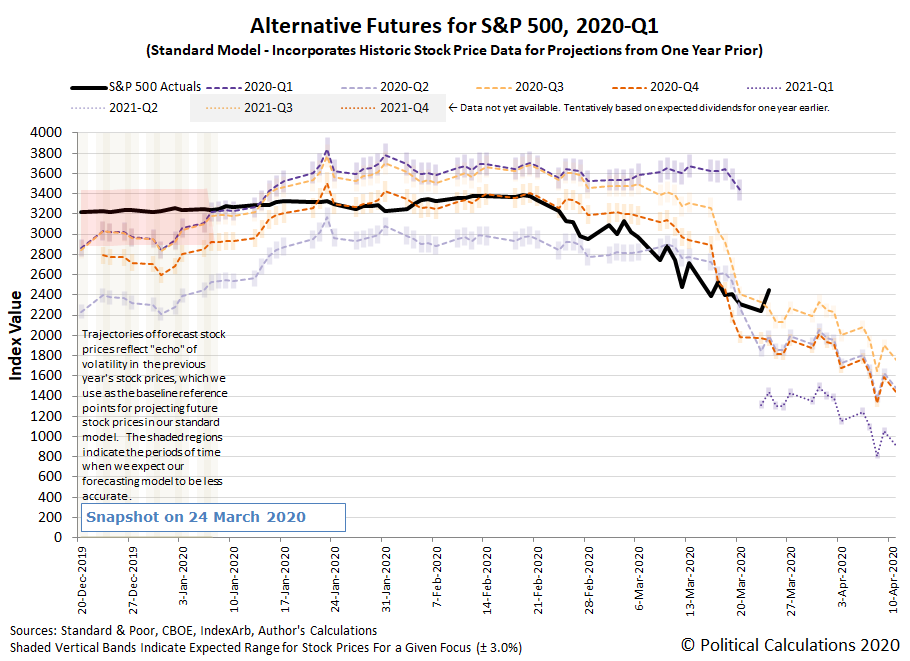 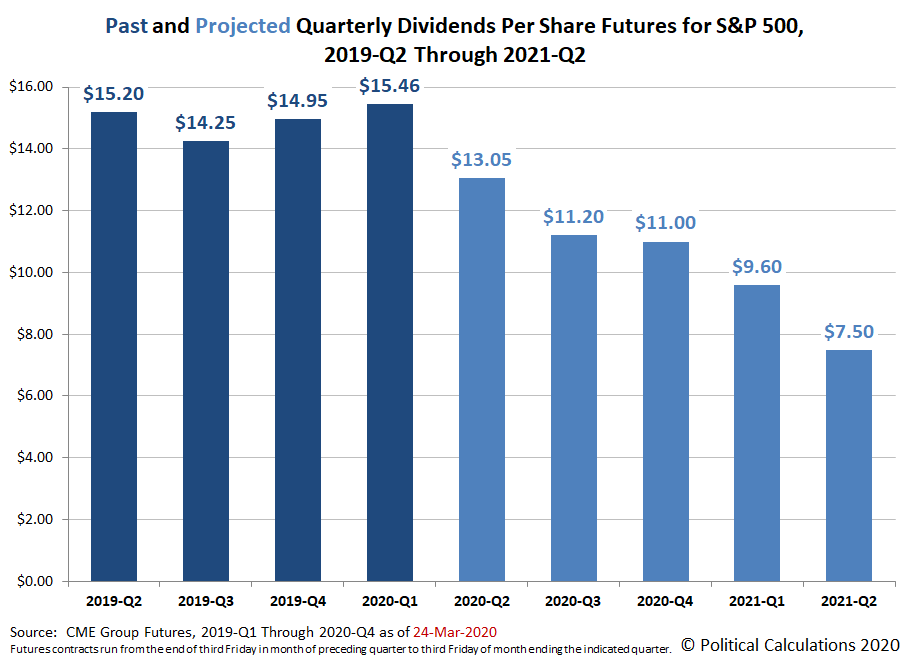 And speculation it is for now, because though the outlooks for expected future dividends in 2020-Q2 and 2020-Q4 both rebounded today, as shown in the update to the dividend futures chart, they are still well below where the S&P 500 is.

Two things can happen. First, in the best case scenario, the expectations for future dividends continue to rise, providing support for the level of the S&P 500. To the extent that outcome simply relies on companies not cutting dividends as much as investors had come to expect, it may even be likely - that's why we've made such a big deal out of the Fed's support in supplying much needed cash liquidity to corporations starving for it, and why we indicated the Fed and other central bank actions to supply it was needed to put a floor under stock prices.

The second thing that can happen is that the level of expected future dividends doesn't recover to what it had been, which would put the S&P 500 at risk of experiencing a Wile E Coyote moment as soon as investors look down and realize that support isn't there.

Which scenario will play out is what makes watching the S&P 500 so interesting!

In a sign that politicians are the worst people to turn to for fast, competent action in a crisis, a deal for a $2 trillion relief bill was announced, which then promptly went nowhere. That was the biggest news for the day, which saw stock prices rise on news of the deal, with gains mostly evaporating by the time markets closed, with the S&P 500 only picking up a little over 1% to end the day at 2,475.56.

The bad news is that projected dividends for 2020-Q2 lost what they had gained yesterday, with the level the S&P 500 looking more like unsupported speculation. These two stories are visually depicted in the following two charts: 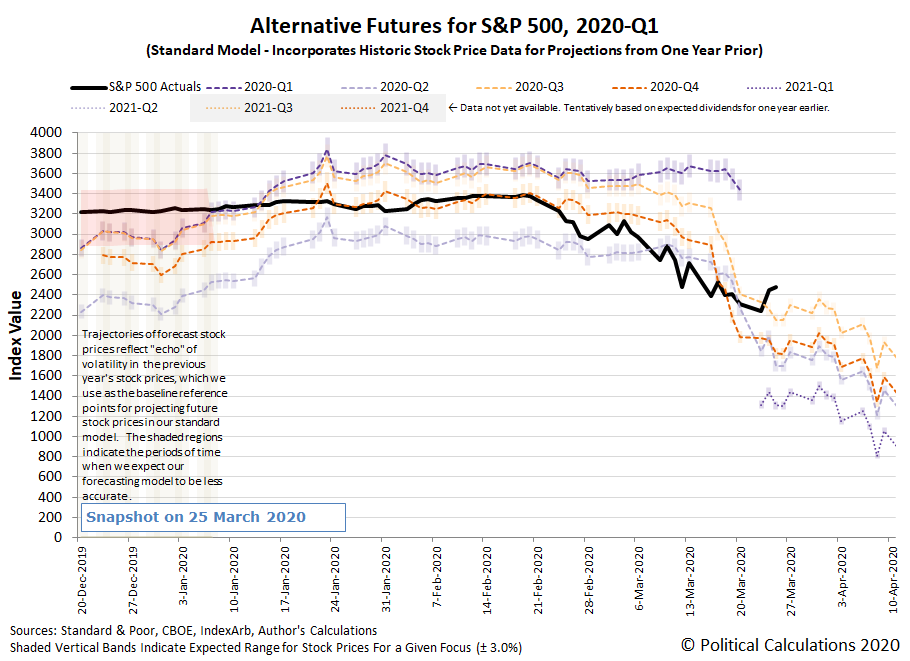 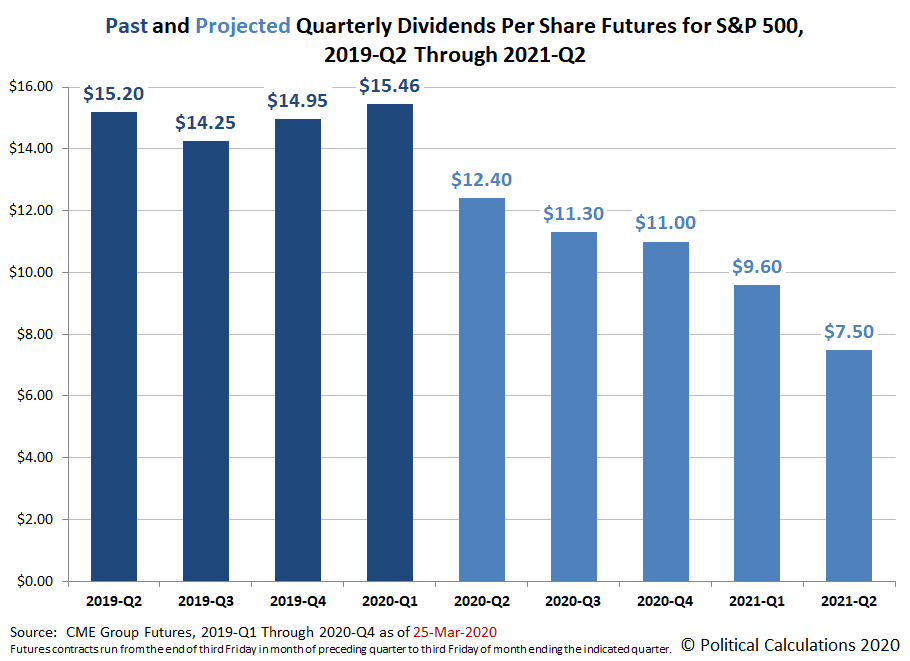 If investors were counting on momentum from Capitol Hill to carry stock prices significantly higher, they didn't get any today.

That large increase in a market experiencing low liquidity continued the speculative bounce in stock prices, where dividend futures didn't change much from the previous day. You can follow this action in the two charts below, where we've done something special with the alternative futures forecast chart. 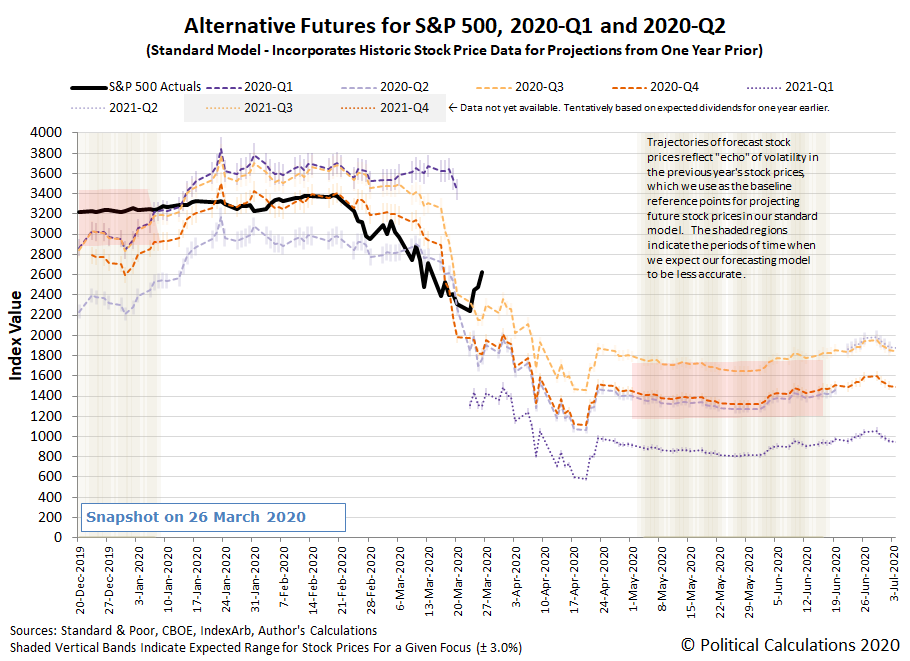 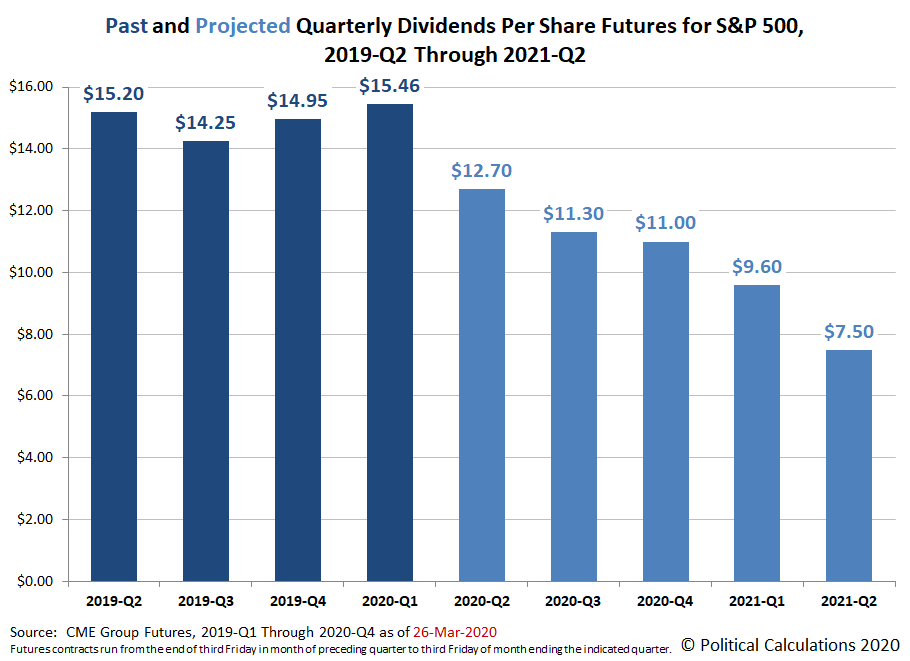 As you can see, we've expanded the timeline of the alternative futures forecast chart to extend through 2020-Q2, so you can finally see what we've been watching develop past the edge of our 2020-Q1 over the last few weeks. The concern we have is that the forecast level of future stock prices, which is directly affected by expectations for future dividends in the dividend-futures based model, is showing that investors are not factoring in any improvement in the outlook for dividends at this time. Unless that changes soon, we think stock prices will be at high risk of resuming a significant decline until they reach a level where they are once again coupled with fundamentals.

We'll catch up with whatever happens on Friday early next week!