Political Calculations
Unexpectedly Intriguing!
02 April 2020
Dividends By The Numbers In March 2020 and 2020-Q1

Buckle up. Recounting dividends by the numbers for the U.S. stock market for March 2020 and 2020-Q1 is going to be a rough ride, so let's get straight to the dividend metadata. 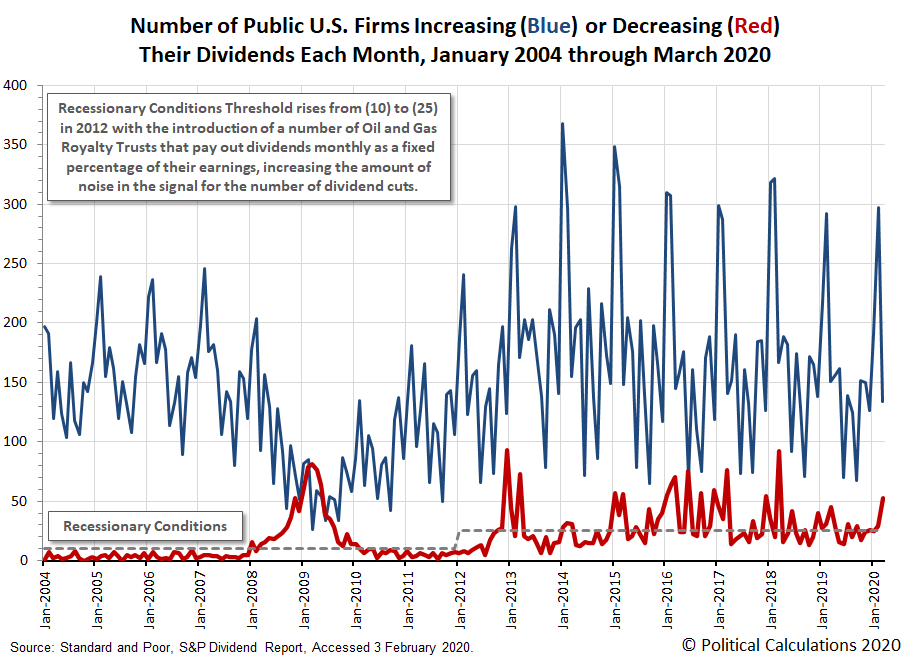 Now that we're on the cusp of what the NBER will almost certainly declare to be a national recession because of the coronavirus pandemic, where we think they will set February 2020 as its Month 0 (the month in which the previous period of economic expansion peaked), we would suggest that a threshold of 50 dividend cuts occurring within a single month is consistent with at least some degree of economic contraction occurring within the modern national U.S. economy.

That distinction differs from the above chart's indication of recessionary conditions being present in the economy mainly in terms of scope and scale, where instead of a single industry or region being affected, the larger value indicates that multiple industries and regions are experiencing negative economic conditions.

Back on point, here is the short summary of the dividend numbers for the entire quarter of 2020-Q1:

We also track dividend cuts and suspensions in near real time, where our ongoing sampling helps pinpoint the timing for when the U.S. economy took a sharp turn toward economic contraction: 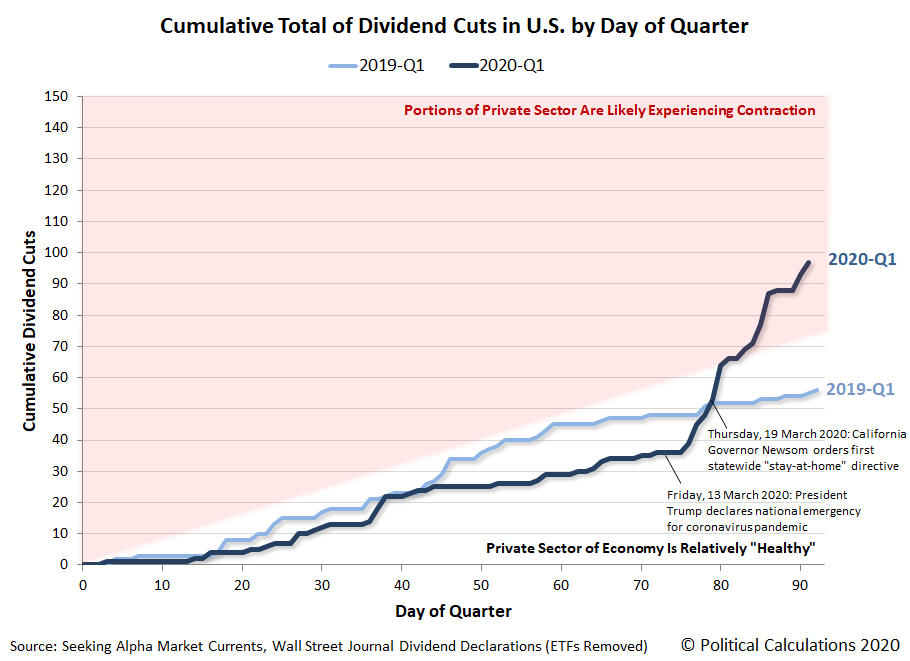 Here's the full list of dividend cut and suspension announcements we pulled from our near real time sampling for the entire quarter, where the total of 98 exceeds the combined number of dividend cuts and omissions reported by Standard and Poor for 2020-Q1 because we also flagged announcements of dividend cuts that haven't yet been officially declared, where the firms in question have only announced they are planning to suspend future dividend payments. Clicking the links for the company names will take you to our source for their respective announcements. Please note in the following list that several firms pay variable dividends on a monthly basis, particularly in the oil and gas industry, where these firms may appear more than once in the following listing which covers the three calendar months of 2020-Q1, which we're not differentiating because the distinction has become irrelevant in the current situation.

Having identified the firms, we can identify the economic sectors that are bearing the brunt of conditions that lead to dividend cuts. The following chart reveals the most negatively impacted industries: 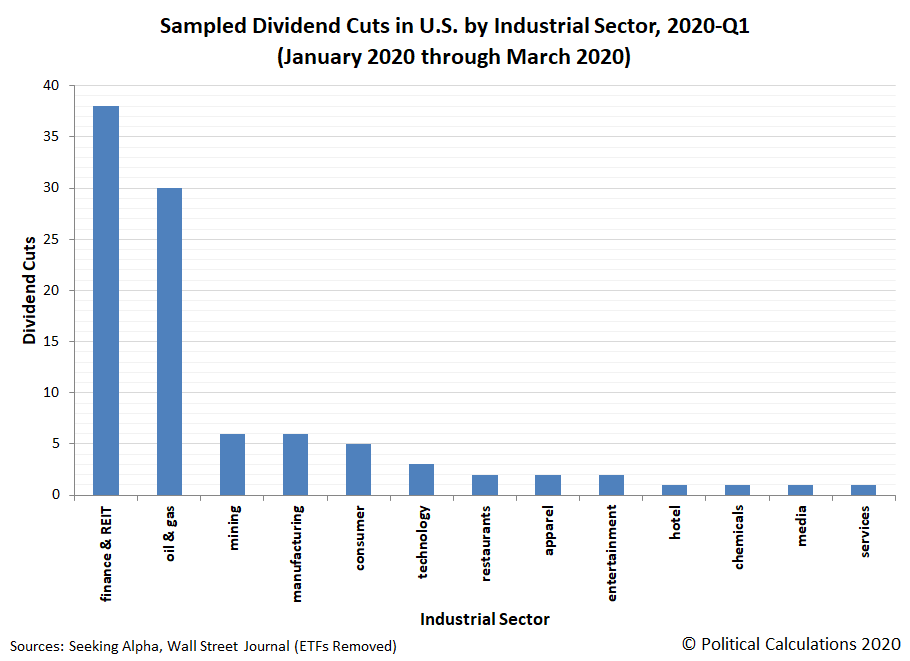 The sector encompassing financial industry firms and Real Estate Investment Trusts (REITs) has been the most negatively impacted by the coronavirus epidemic in the U.S. and its related economic shutdowns. Of the 38 firms in this sector announcing dividend cuts, 23 have acted since 19 March 2020 when California's governor implemented the first statewide order in the U.S. to close businesses and for residents to stay-at-home. These orders are disproportionately impacting mortgage, hotel, shopping center, and restaurant REITs, where this business structure has become popular within these industries in recent years.

The oil and gas sector is the second most-negatively affected industrial sector, with 29 cuts in total. Those cuts have come less in part because of reduced travel stemming from the business closures and stay-at-home orders, but more because of a price war that erupted between Saudi Arabia and Russia, which have both sharply increased production in bids to gain market share as demand plummeted, sending oil prices sharply downward.

The dividend cuts in the remaining industries show the breadth of affected sectors. In total, of the 97 dividend cut and suspension announcements we counted in the quarter's sampling, 45 have come since 19 March 2020.

Perhaps the most remarkable thing about the current economic situation is that 2020-Q1 had been on track to be a strong quarter compared to the year-ago quarter of 2019-Q1 until the coronavirus pandemic disrupted how people live and do business.