Political Calculations
Unexpectedly Intriguing!
15 May 2020
The Coronavirus and Atmospheric CO2 in April 2020

In April 2020, the trailing twelve month average of the year-over-year change in the atmospheric concentration of carbon dioxide measured at the Mauna Loa Observatory ticked very slightly down from last month. The following chart shows the historical trend for this measurement from January 1960 through April 2020: 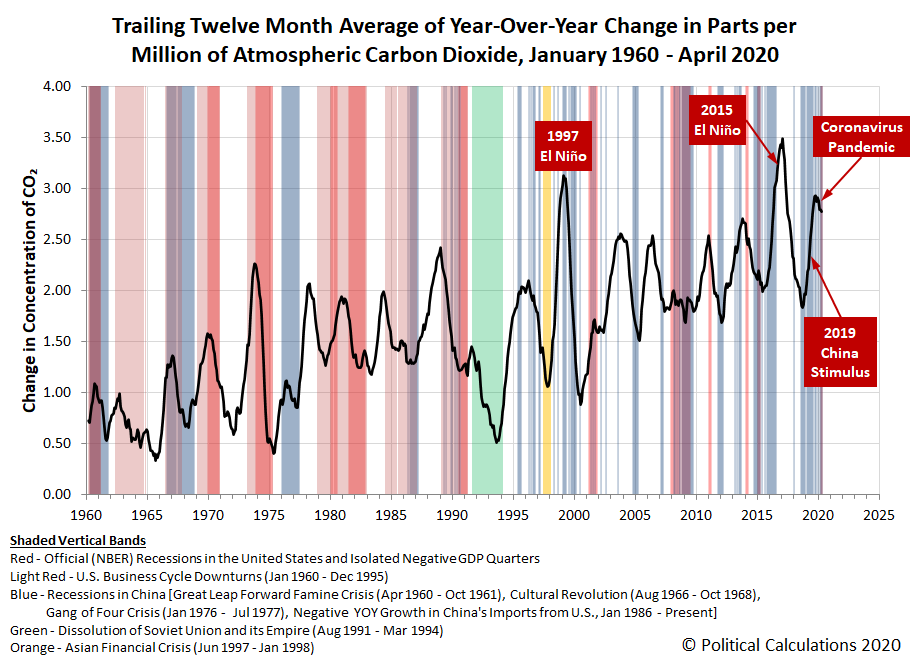 In looking at the data presented on this chart the colored vertical bands correspond with the major historical and economic events listed at the bottom of the chart. Compared to the previous version we last presented in March 2020, we've provided some additional annotations to provide some context for some of the more recent events that affected atmospheric carbon dioxide levels, including the 1997 and 2015 natural El Niño events that coincided with exceptionally large wildfires in Indonesia, which greatly increased the rate at which CO₂ was injected into the Earth's air during these periods.

We've also highlighted 2019 for China's economic stimulus efforts, where China's political leaders accelerated the construction of coal-fired power plants within the country as they attempted to offset the negative economic impact of the U.S.-China trade war, with the effect of raising both the floor and the ceiling for human-generated carbon dioxide emissions. China is, by a very wide margin, the largest national contributor to global CO₂ emissions, with an impact that extends beyond its borders if you factor in its funding and construction of coal-fired power plants in nations it has targeted through its "Belt and Road" trade initiative.

We've also pointed to the period since December 2019 as the global coronavirus recession, although that event isn't the only contributor to the falling rate of growth of atmospheric CO₂ during this time. The end of large wildfires in Australia would also have an impact by removing this source from adding to CO₂ levels in the Earth's air, though scientists don't expect to start seeing that effect in the observations at Mauna Loa until the latter half of 2020.

The following chart shows the year-over-year change in atmospheric carbon dioxide levels the trailing year average shown in the previous chart is based upon. 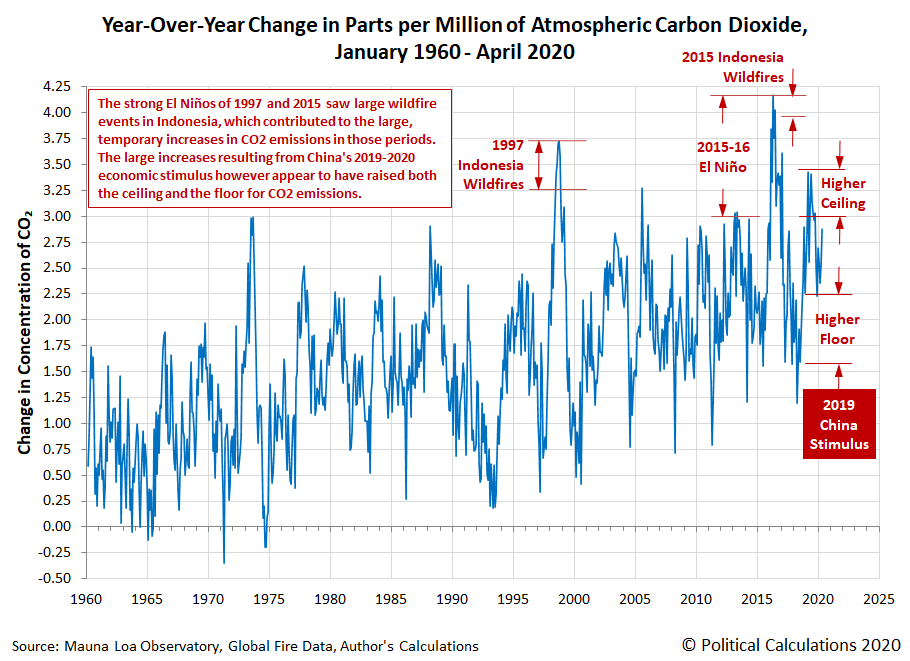 Since ending its own economic lockdown in February 2020, China's carbon dioxide emissions have been increasing, which will offset the reductions in CO₂ emissions now occurring in North America and in Europe resulting from the economic lockdowns imposed by governments across much of these regions.