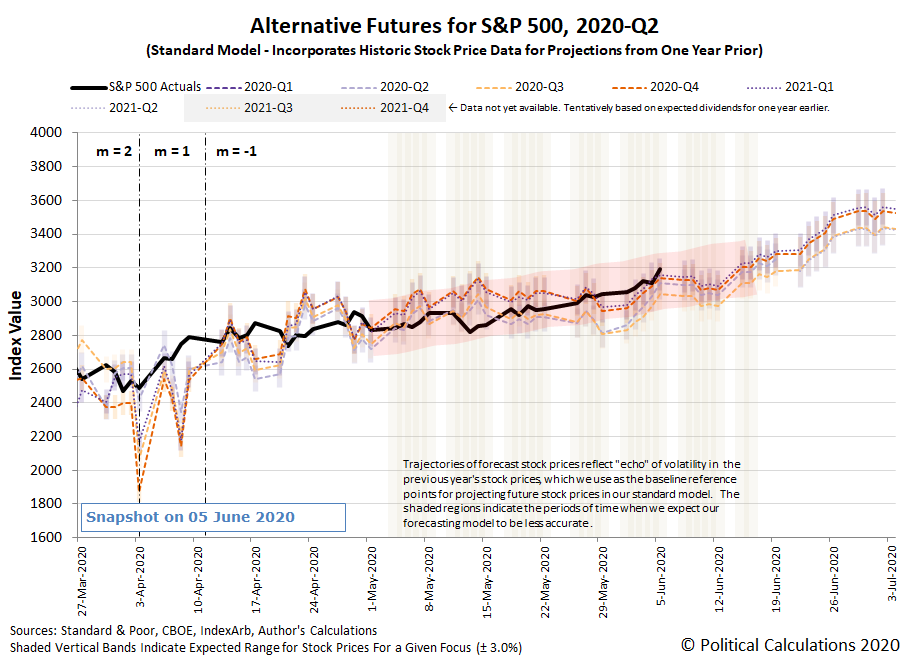 What made the May 2020 jobs report so surprising is that it showed a substantial gain in jobs when significant losses had been expected. That surprisingly positive outcome has already begun altering the outlook for the S&P 500, where we saw some initial movement away from expectations of potentially negative interest rates compared to what we observed last week. 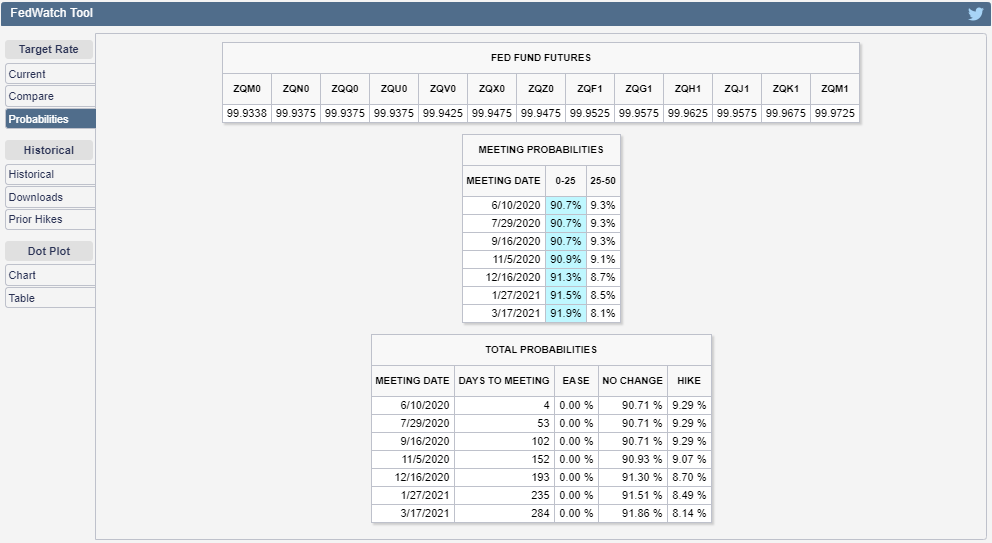 Since the CME Group's FedWatch tool has not been adapted to handle the potential for a negative Federal Funds Rate (FFR), the right way to read the probability shown for the lowest "0-25" basis point range is that investors are giving 91% probability the FFR will be at that level or less as of the close of trading on 5 June 2020, lower odds than the were expecting a week ago.

There was also a significant improvement in the outlook for expected future dividends over what we saw last week. 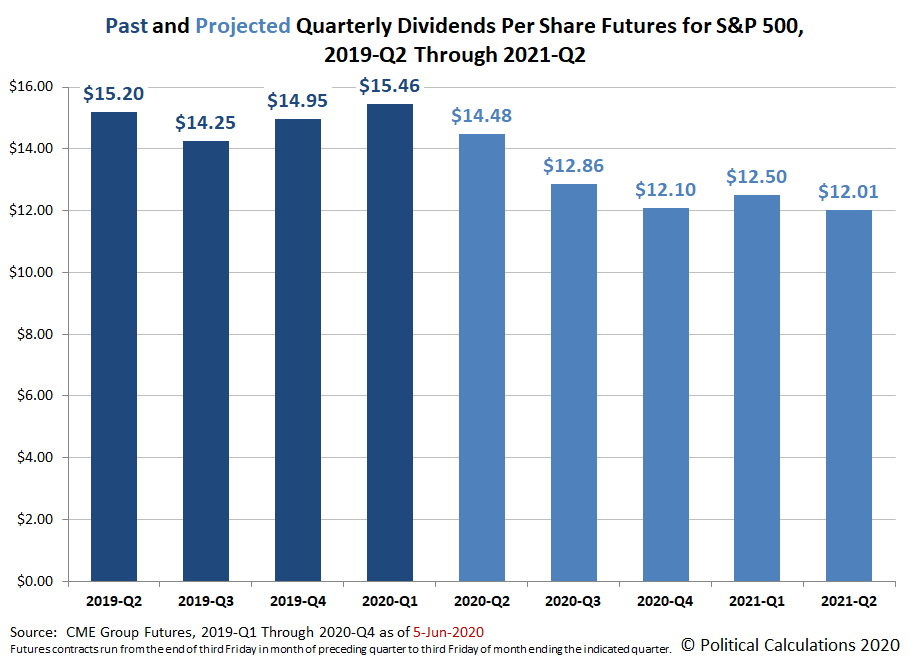 Though it still appears negative, we may be seeing the value of the amplification factor starting to move in a positive direction, which if it continues to become positive, would be a sign the market is leaving the upside down for a more normal right side up relationship in how stock prices work.

What happens next is unlikely to involve a smooth transition from the current regime, as expectations will be affected by the random onset of new information. Speaking of which, here are the market-moving headlines from the week that was, where you might be surprised to find it wasn't just the U.S. jobs market that offered unexpectedly positive news for investors on Friday, 5 June 2020:

Elsewhere, Barry Ritholtz lays out the positives and negatives he found in the past week's markets and economy news.

Since we've been discussing how this week's expectations for the Federal Funds Rate and the S&P 500's dividends have changed from last week, here's our analysis from last week. For other recent and related analysis, please follow the links to our S&P 500 chaos series.

We think today's rout may primarily be the result of delayed fallout from the Federal Reserve's "commitment" to hold the Federal Funds Rate at the zero bound range (between 0% and 0.25%) for the next two years, where investors had been expecting the potential for negative rates. In effect, investors are realizing the Fed's monetary policy will be less expansionary than what they were expecting, with the result being that stock prices are falling, just as considered in the "what if" scenario we presented back on 26 May 2020.

At the same time, the U.S. is seeing a new increase in coronavirus infections, primarily in states that had not been part of the initial wave of infections, which will delay the recovery of key parts of the economy, with the aerospace industry and airlines especially hard hit, where we may soon seen greatly expanded layoffs.

The effects of this one-two punch can be seen in the S&P 500's dividend futures, where distant future quarters fell today, and also in the alternative futures chart, which saw the S&P 500 drop below the bottom end of our redzone forecast, which potentially indicates our "what if" scenario was correct. 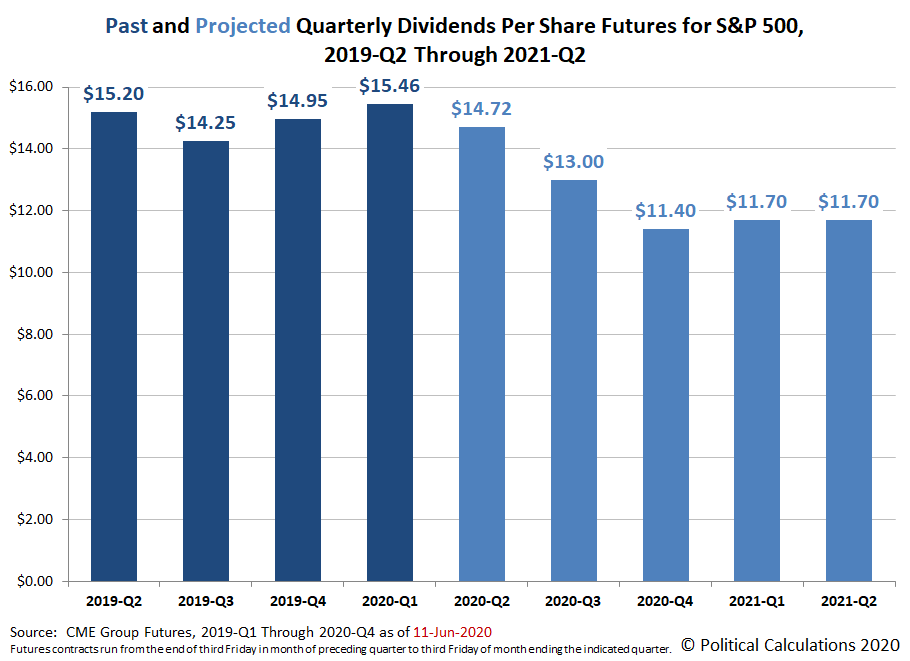 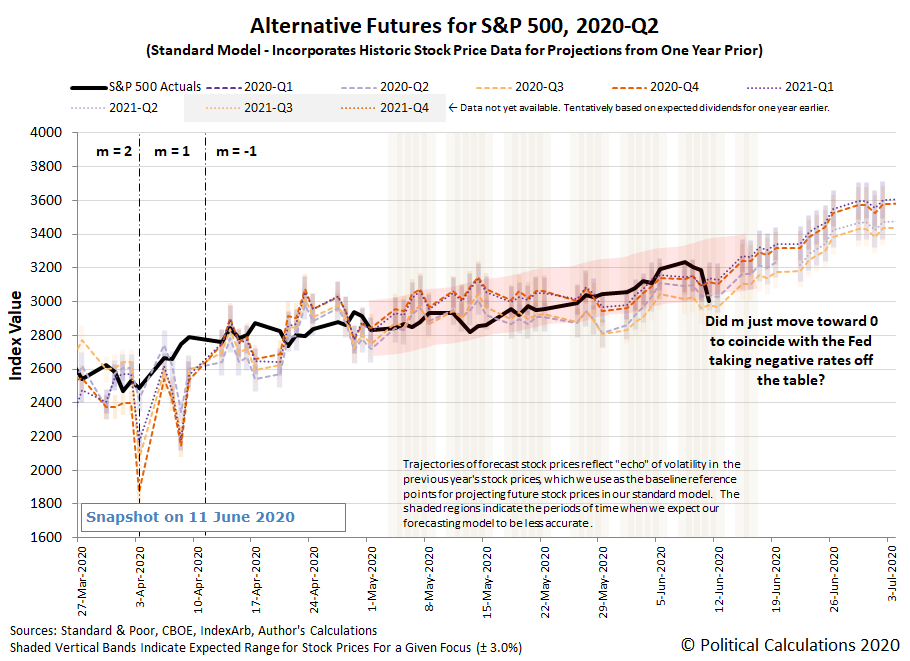 We'll cover however the week closes on early Monday, 15 June 2020 in the next regular edition of our S&P 500 chaos series.