U.S. exports to China jumped in April 2020, following the Chinese government's reopening of China's economy after having closed it for weeks to arrest the outbreak of what has become the global SARS-CoV-2 coronavirus pandemic.

Meanwhile, with its exposure to the global coronavirus pandemic lagging months behind China's, much of the U.S. economy was locked down by state and local government officials beginning in March 2020, triggering a national recession. The lockdowns sharply reduced economic activity throughout April 2020, including reducing imports from China.

Both these factors have shown up in trade data tracked by the U.S. Census Bureau, where the following charts shows the year over year change in the exchange rate adjusted value of goods exchanged between the U.S. and China. 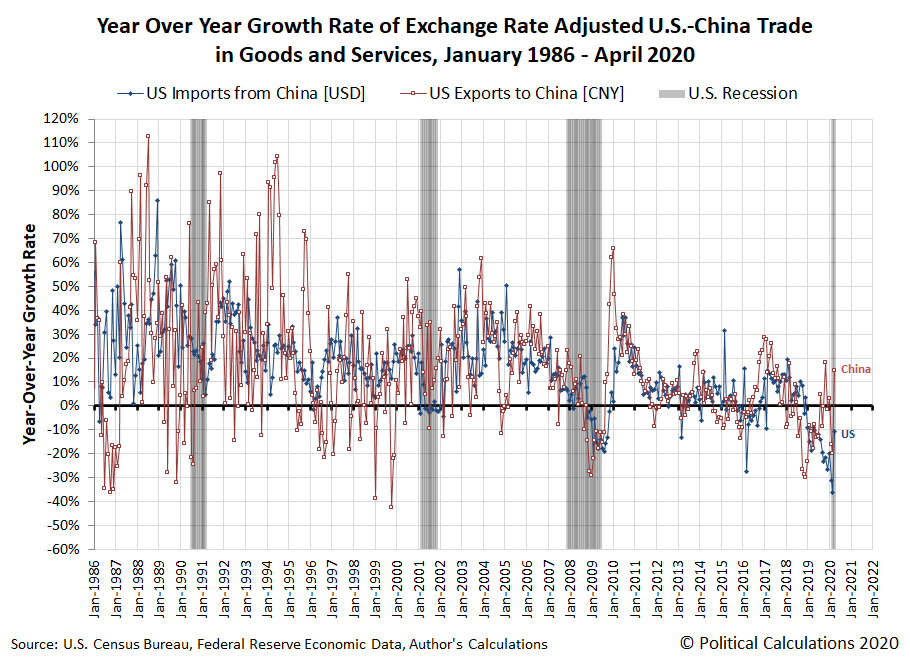 On a side note, this is our first chart showing the official onset of the Coronavirus Recession. Previously, we called the national recession on 21 March 2020. For the record, it took the National Bureau of Economic Research another 78 days to get around to officially declaring February 2020 as "Month 0" of the coronavirus recession, or rather, the peak of the U.S. economy's previous period of expansion, with March 2020 as its first month.

Getting back to the trade story, with January 2020's 'Phase 1' trade deal, the volume of trade between the U.S. and China should have begun recovering back in February. Instead, it plunged through March 2020 as a result of the coronavirus pandemic starting in China, but has started rebounding in April with the reopening of China's economy, although the total value of goods and services traded between the U.S. and China in April 2020 was $3 billion lower than April 2019's level. 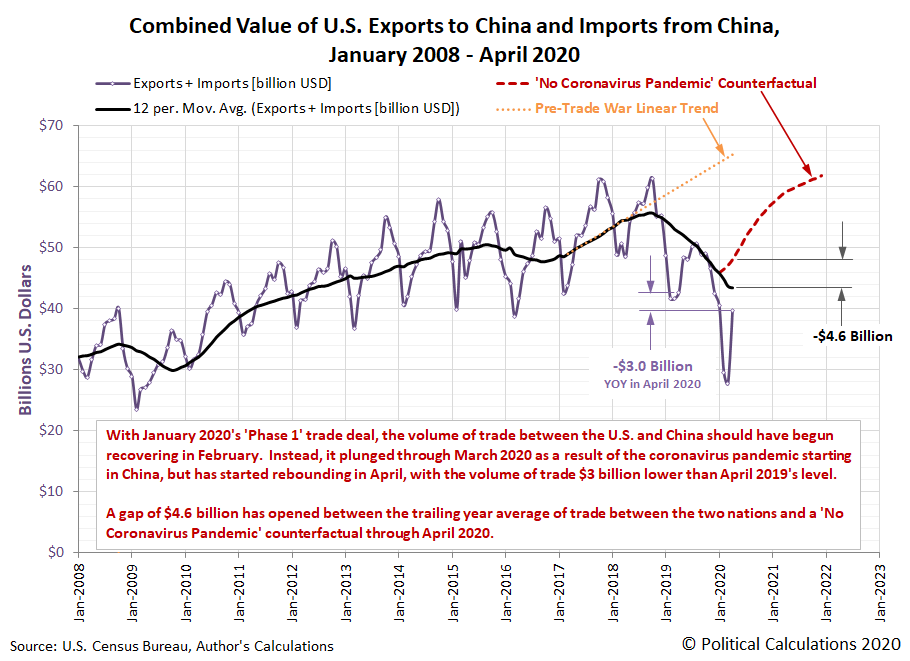 Overall, we find a gap of $4.6 billion has opened between the trailing year average of trade between the two nations and a 'No Coronavirus Pandemic' counterfactual through April 2020.

U.S. exports of pork to China surged in April 2020, partly due to January 2020's 'Phase 1' trade deal and also because of high demand, where China's epidemic of African Swine Fever has killed millions of China's domestic hog population in 2019, creating a severe meat shortage in that country.

Looking forward, we wonder to what extent the surge in U.S. exports to China in April 2020 might be attributed to shipments that had been bottlenecked to that country while its economy was closed. April 2020's surge may be short lived.