Political Calculations
Unexpectedly Intriguing!
July 6, 2020
The S&P 500 Returns to the Right Side Up

It's amazing what you can do with just four additional days worth of data!

Last week, we presented two new potential scenarios to explain why the S&P 500 (Index: SPX) has been behaving as it has in recent weeks. This week, thanks to having four extra days worth of data, we can now narrow the picture down to a single scenario that explains the S&P 500's trajectory.

Here's that single scenario, presented in a single chart: 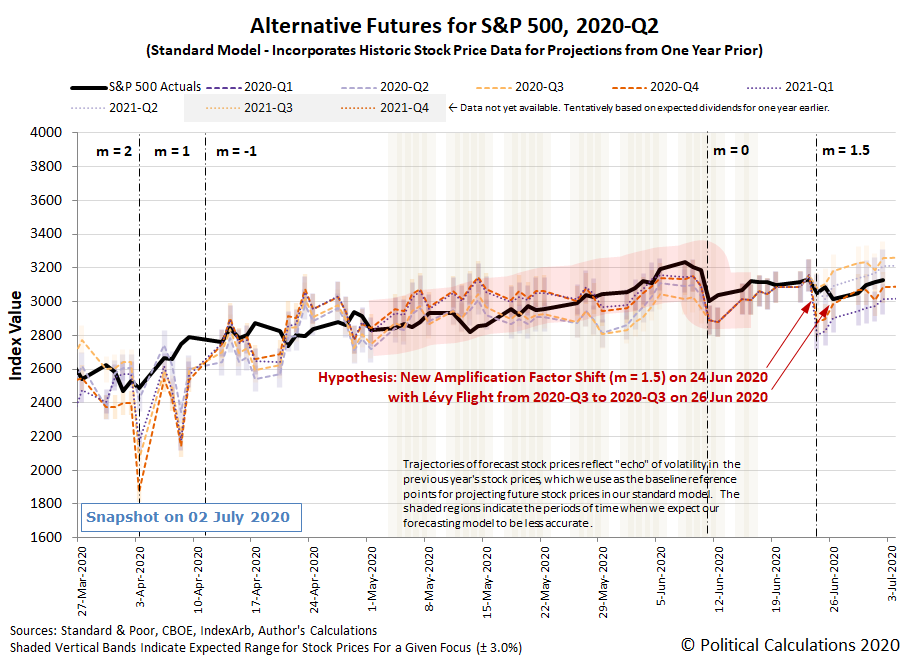 Going back to 11 June 2020, when the S&P 500 suddenly plunged by 5.9%, we think the hypothesis that this outcome was influenced by the combined effect of two significant shifts in investor expectations was correct. The first part of the shift occurred as investors incorporated the new expectation that the Federal Reserve's monetary policies going forward would be less expansionary than they had previously anticipated, which the dividend futures model captures as a change in the value of the amplification factor, which went from a value of -1 to approximately zero.

The second part of the shift occurred simultaneously, as investors also shifted their forward-looking time horizon to focus away from 2020-Q4, where their attention had been steadily held since 1 May 2020, to instead focus on the nearer term quarter of 2020-Q3 in a new Lévy Flight event.

Those two conditions then held until 24 June 2020, when it appears that investors once again adjusted their expectations of the future for the Fed's monetary policies be even less expansionary. When that happened, we can see the trajectory for the S&P 500 following the dividend futures-based model's projection for investors focusing their attention on 2020-Q3, which is what allows us to confirm the Lévy Flight event from 11 June 2020. If investors had instead been consistently focused on 2020-Q4, the decline of the S&P 500 on 24 June 2020 would have been more severe.

Instead, we see the trajectory of the S&P 500 follow the projected path associated with investors focusing their forward-looking attention on 2020-Q3 for another day, followed by a relatively small Lévy Flight event on Friday, 26 June 2020, when investors appear to have shifted their focus from 2020-Q3 outward to the more distant future quarter of 2020-Q4.

That's where the additional four days worth of data come in handy. During the Fourth of July holiday-shortened trading week ending on 2 July 2020, the trajectory of the S&P 500 generally followed the projected path associated with investors continuing to focus upon 2020-Q4 through the rest of the week, falling well within its expected range and allowing us to confirm the second Lévy Flight event of June 2020.

Which is all pretty cool for explaining what happened during the last month of the best quarter the S&P 500 has had since 1998. And, if we're right, there may be an extra bonus. The S&P 500 would also appear to be leaving the upside down and returning to the right side up, which is a more normal state of affairs for how stock prices behave.

As for what the potential future for the S&P 500 looks like with the return to the right side up, assuming it holds, we're afraid you'll have to wait until next week when we roll out the alternative futures chart for 2020-Q3. Until then, here are the market moving headlines we tagged during the comparatively uneventful week that was for the index!

It may have been a short trading week, but it didn't lack for headlines. Still, if you're looking for even more news to understand the context of what happened in the stock markets, Barry Ritholtz breaks down the positives and negatives he found in the week's markets and economy news.