Political Calculations
Unexpectedly Intriguing!
September 7, 2020
The Week the Market Rally's Lack of Breadth Caught Up to the S&P 500

Over the last several weeks, the S&P 500 (Index: SPX) has been on a tear, setting records on an almost daily basis despite lacking breadth, with the biggest rises in stock prices concentrated in the technology sector.

Until last week, when what we've described as a bubble in stock prices appears to sudden pop after spiking up to hit an all-time high.

Remarkably, the S&P 500 waited to exit the redzone forecast range we've been focused upon for the last six weeks in the alternative futures chart. 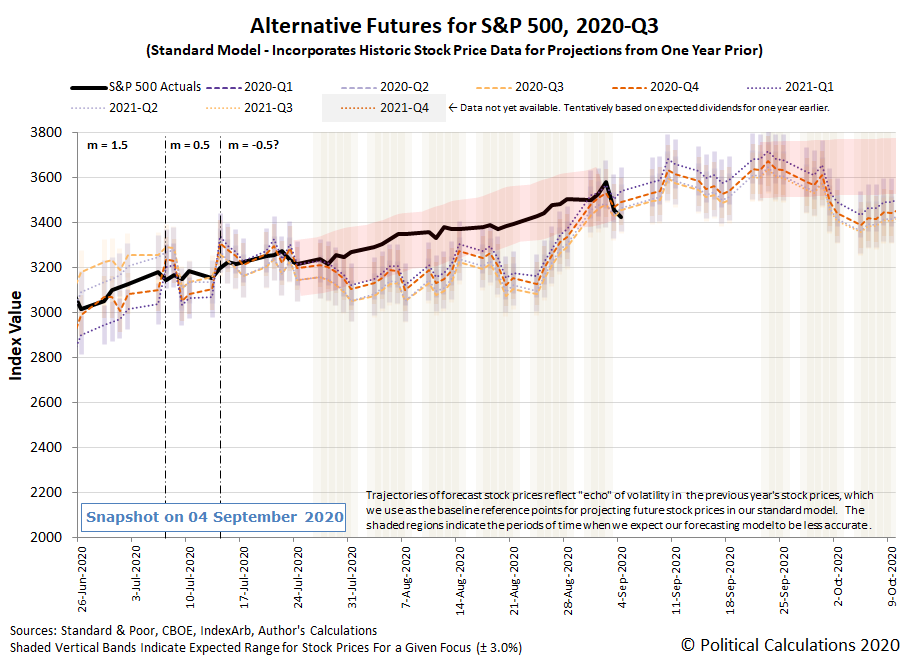 The week preceding the Labor Day holiday in the U.S. was also the one when we finally got better insight into what was one of the biggest factors of the stock market rally over the past several months. It turns out that Japanese investment bank SoftBank has been engaged in a series of trades in the options market for tech stocks that were large enough to swing the entire market, while also explaining why the market's months-long rally has been so concentrated in these issues.

Much of the story turns out to be pretty technical, where ZeroHedge deserves a lot of credit for following the breadcrumbs. Here are links to the more significant parts of their coverage from the past week:

The WSJ and the FT have also jumped in with their own coverage.

From our perspective, we associate this kind of market activity with the kind of rapid, quantum-like changes in the level of stock prices, so it is interesting to see what appears to be just that kind of action happen when SoftBank's role in fueling the tech rally was exposed and apparently suddenly curtailed, with investors seeming to suddenly change their forward-looking focus from the distant future quarter of 2020-Q4 inward toward the near-term future of 2020-Q3, as suggested in the alternative futures chart.

That wasn't the only news of the week, where we fished the following headlines for their market-moving potential from the week's newstream.

Elsewhere, Barry Ritholtz' summarized the positives and negatives he found in the rest of the pre-Labor Day holiday week's economics and markets news.

The big question we have for the holiday-shorted trading week ahead is whether last week's surprise volatility will continue.