Political Calculations
Unexpectedly Intriguing!
20 October 2020
To Whom Does the U.S. Government Owe Money?

Earlier this year, we found the U.S. Federal Reserve had become the U.S. government's new sugar daddy. As of 30 September 2020, we find that the Federal Reserve directly holds over $4.445 trillion in U.S. Treasury securities, up $2.338 trillion from the $2.108 trillion it held a year earlier. Uncle Sam's new friendly neighborhood loan shark lent 47% of all the dollars the government borrowed during its 2020 fiscal year.

In becoming the U.S. government's primary creditor, the Fed has widened its margin over Uncle Sam's former top lender, Social Security's Old Age and Survivors Insurance Trust Fund, which has only loaned the U.S. government 1 out every 10 dollars it has borrowed.

The following chart tallies the shares of money the U.S. government has borrowed from its major worldwide creditors. Please click here to access the full size version of the chart. 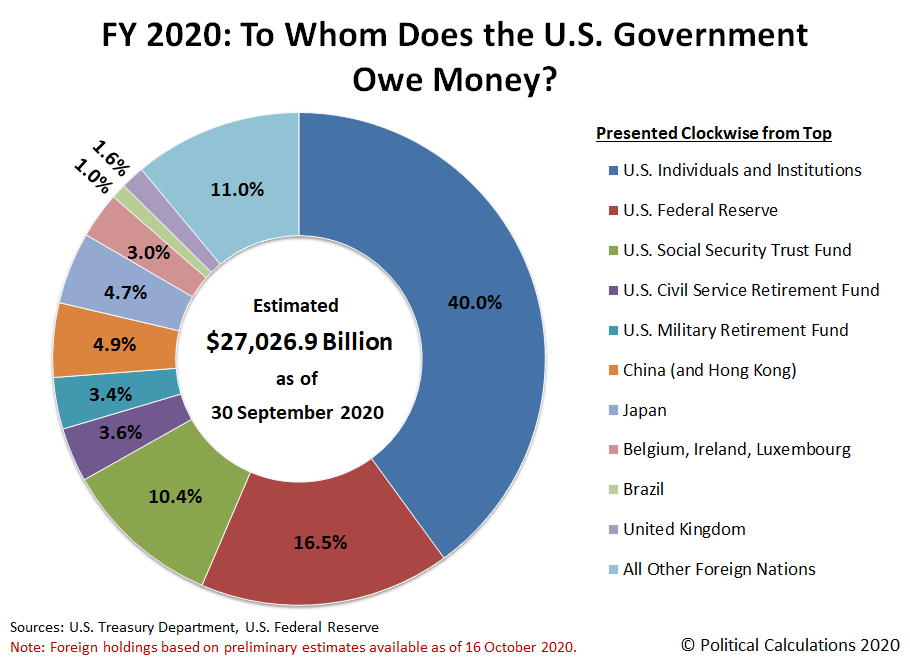 With the Fed having taken such a dominant lender role in financing the U.S. government's spending, the relative share of money borrowed from foreign entities has decreased. That share has fallen from 30% of the total public debt outstanding in 2019 to 26% in 2020. Japan has become the largest foreign creditor to the U.S. government, as China seeks to reduce its holdings of U.S. government-issued debt.

We had to wait until the U.S. Treasury Department issued its September 2020 monthly treasury statement some four days late on 16 October 2020 to get the latest debt holdings for Social Security and other trust funds operated by the U.S. government. The data for major foreign holders of U.S. government-issued debt is preliminary (or rather, only up-to-date through August 2020) and will be subject to revision over many months ahead.