Political Calculations
Unexpectedly Intriguing!
January 26, 2021
Disorder in the S&P 500 During the Coronavirus Recession

From time to time, we take on the challenge of telling a very big story with a single chart. Today, we're taking on the economic story of the coronavirus recession in the United States, as seen through the lens of the relationship between the S&P 500 (Index: SPX) and its trailing year dividends per share. Here's the chart. 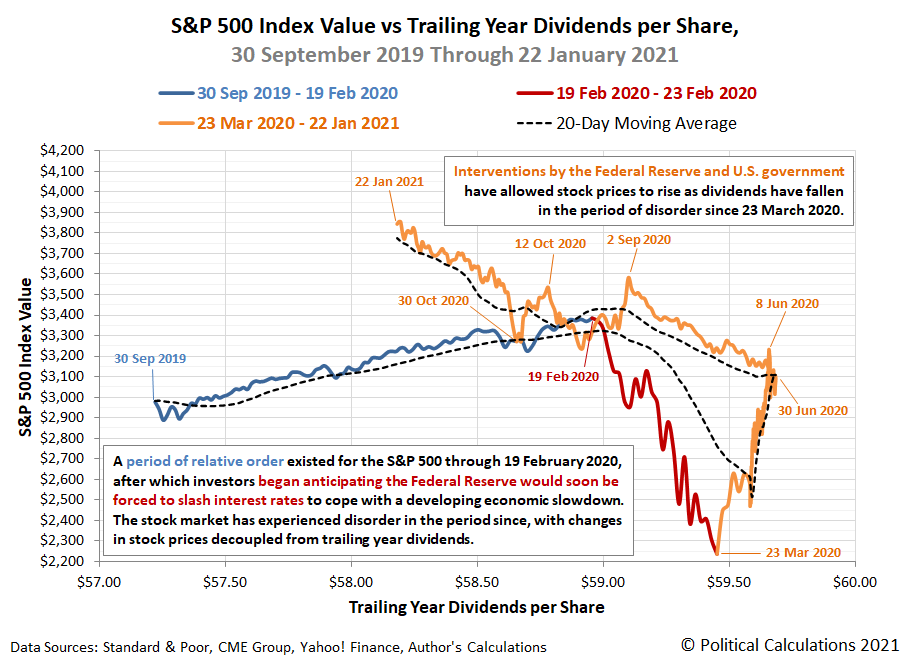 For the chart, we've arbitrarily picked up the story from the end of the third quarter of 2019 to illustrate that the story of the coronavirus pandemic in the United States began during a relative period of order for the U.S. stock market. The current period of disorder began shortly after the market peaked on 19 February 2020, when investors began shifting their forward-looking focus from the distant future quarter of 2020-Q4 toward the nearer term future of 2020-Q2. This shift in the forward time horizon of investors was prompted by expectations the Federal Reserve would soon be forced to slash short term interest rates in response to the developing global economic slowdown caused by the coronavirus pandemic.

After 23 March 2020, the market underwent a regime change caused by the Fed's aggressive response and the U.S. government's fiscal stimulus to provide relief for the pandemic's economic disruption, in which the Fed would employ its quantitative easing tools to underwrite and finance nearly all the U.S. government's deficit spending at near-zero interest rates. That regime change effectively reset the relationship between stock prices and their underlying fundamentals, making it possible for stock prices to rise while dividends have fallen.

How long that state of affairs might be sustained remains to be seen.