The purpose of patent illustrations is very straightforward. They are intended to visually convey the novel features of an invention. Consequently, they tend to make for pretty dull, static presentations, even for inventions that themselves are dynamic in operation.

That's why the Inventions in Everything team gets excited whenever we come across a patent with illustrations that tell how an inventor conceives their invention will function through a sequence of illustrations. Or as we're about to see with U.S. Patent Number 5,781,936, which was issued to Jacob Alaloof on 21 July 1998, where a single figure from a patent tells an entire story. In this case, how the invention of an airbag suit for motorcyclists would function to protect their lives in an accident. The story is told from right to left.... 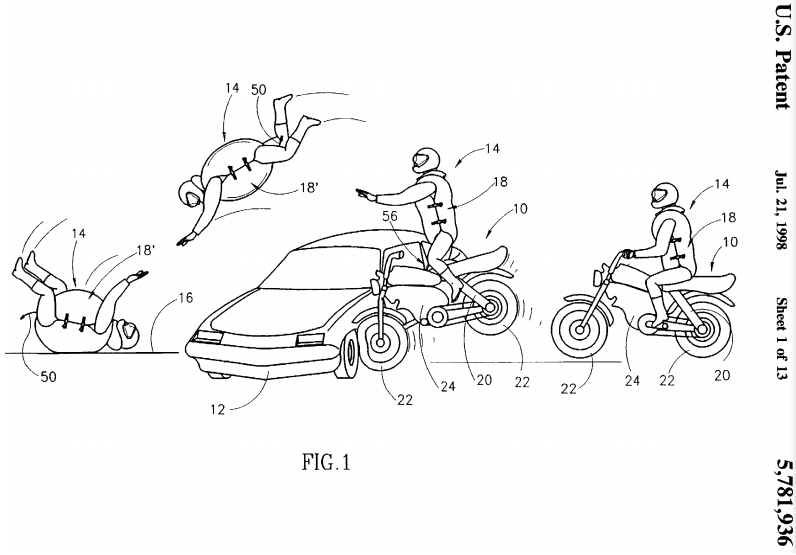 It is generally recognized that there is a greater risk of serious injury to motorcyclists in the case of an accident than to automobile passengers. This is due, inter alia, to the fact that, unlike automobiles, motorcycles are not equipped wiht protective systems which enclose users thereof. Accordingly, apart from injuries that may be caused to a motorcyclists by his colliding directly with a moving vehicle or stationary object, there is also a very high risk that, in the event of a collision between a motorcycle and either another vehicle or a stationary object, he will be thrown from the motorcycle. When this happens, the motorcyclist is liable to sustain fatal injuries or, at least, very serious damage to vital parts of the body, especially to the back, spine, neck and pelvis. This can result in very serious injurty thereto, if not paralysis or death.

And here's the description of the invention itself:

The present invention seeks to provide a protective system for riders of nonenclosed vehicles. The protective system is in the form of a garment which is automatically inflated to a force dissipating or deflecting shape in response to unintentional separation of the rider from his vehicle.

We would say the patent illustration ably captures both the scenario of the problem the invention is intended to solve and the solution.

Motorcyclist airbag suits are a real thing, which though not yet widely in use, have become more so during the past two decades as the technology has evolved toward greater practicality. FortNine's Ryan Kluftinger does a fantastic job of explaining the physics and the psychology of using an inflatable airbag suit while riding a motorcycle in the following under 10 minute video, which also provides a nice survey of today's state of the art in this invention category:

"Fishing for Boats" presents our animation of the patent illustrations provided in U.S. Patent 7,744,313.